Learning to live in the Sonoran Desert

On Friday over at the High School they took Chloe and her classmates to an "assembly" in the sun (it was 95ºF), where 80 year old ladies put on a cheer leading performance for the students. The children watched in a stunned and sweaty silence.

Adjusting to life here has been interesting for us all.  When Arizonans make jokes about the dry heat there's almost no way you can understand unless you live here.  First of all my skin is dryer than it's ever been, even in the winters of New York and Argentina it was never this bad.

When we first arrived I found an old plastic milk crate out on the patio.  As I was moving it around I dropped it and .... It shattered into 7 pieces! I picked up one of the pieces and it crumbled into tiny pieces.  All the moisture was just gone from that milk crate.  Then last week it happened again at the studio I was working at with some old plastic shelving.  Crumbling plastic.... It's just odd. 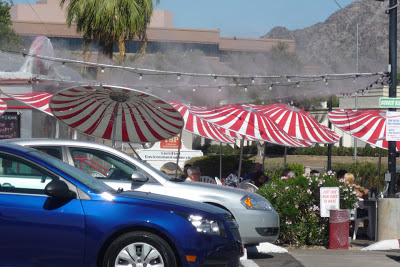 This is an outdoor eating area near where we live.  As you can see they have "misters" that fill the air with moisture. 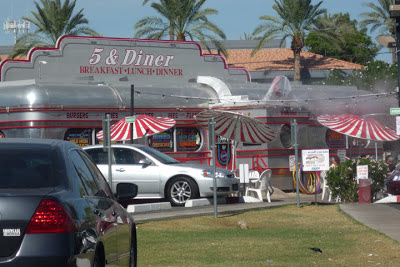 It creates a more comfortable dining experience when it's 95ºF or above (which it's still getting up to even in late October). It also covers you and your food with a light coating of water... Something to get used to.. 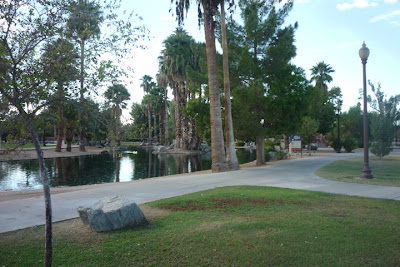 On Sunday we thought perhaps it was cool enough to do a daytime outing outside. So we headed to Encanto Park downtown. 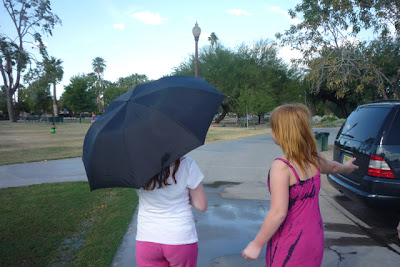 We came prepared with some umbrellas for the sun. 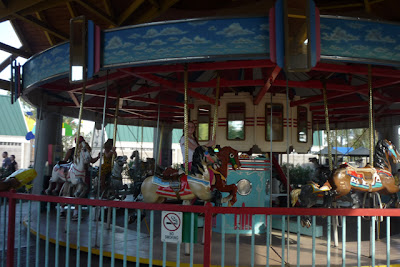 Here's Phoebe trying out the carousel on Enchanted Island. 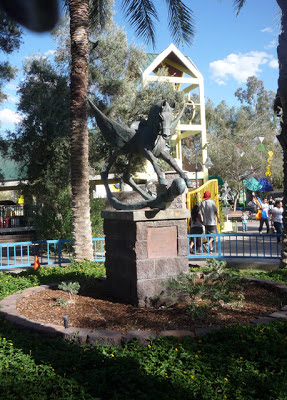 The rocking horse sculpture as we enter Enchanted Island. 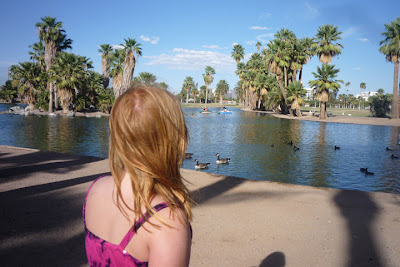 It's a pretty park, but it's was still really sunny. Maybe in another week it'll be better. 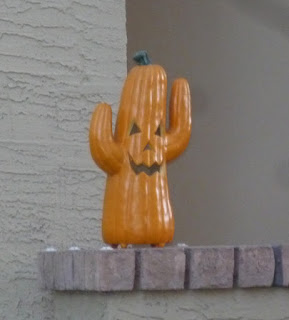 Just in time for Halloween!

fishwithoutbicycle said…
Love the Hallowe'en cactus!!! Don't know how you are coping in that heat though, summer is my least favorite season, so I wouldn't be able to stand it!!
October 24, 2012 at 3:21 AM

Carolyn Watson-Dubisch said…
Actually it's in the 80ºF this week-so it's getting cooler. By Christmas it gets cold. Not snow, but definitely light coats.
October 24, 2012 at 6:49 AM

Toi Pacheco said…
Hi there! Welcome to Arizona...
We used to live in the White Mountains where it was beautiful...I grew up there, Hauling wood for the winter fires...We now live in a desert area just a few hours away from the Valley of the Sun.We love where we live, but it does get Hot! Phoenix heat is a crazy Heat! But like Carolyn Watson-Dubisch said, it does get chilly over there during the Winter months.
There is a lot of beauty in the desert, just have to really look some times. Lots of Smiles :O)
October 25, 2012 at 9:54 AM