I'm calm now. I'm drinking a beer. It's helping me be calm.

Today we went into Centro Historico. Most of the roads are cobblestone and narrow and a bit hilly. We went to meet a new friend in a cafe. She was lovely. The cafe was lovely, even without a/c, it was quite nice. We talked about what brought us to Mazatlán. She told us what brought her and her husband here and how to get to a bakery and recommended a Spanish school for Naomi, and it was great. Then we meandered over to the bakery, got some bread, picked up our car and attempted to drive home.
We don't know where we're going yet so the GPS is out and sending us down very narrow, and in some cases very steep, cobblestone roads. Our car is an SUV and quite big, so we were already getting pretty nervous. Then we get directed to turn up the steepest and most narrow road yet. We shouldn't have done it. We should have gone the other way and just let the GPS adjust. But we did it.

As we approached the top of the hill the car in front of us starts backing up towards us. He's not slowing and he's headed straight at us.
Mike starts backing up. Backing up our car is a challenge in a flat parking lot. It's an SUV with blindspots the size of a football field, and we both do it as little as possible. The car in front is not slowing and our car is suddenly tipping. 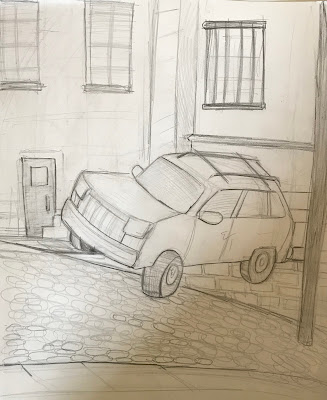 I was too panicked at the time to take photos, but we went up on the wall on the side. Mike switched out of reverse and tried to drive forward,  but we only had one wheel on the road and all we did was slide backwards, and keep tipping!! 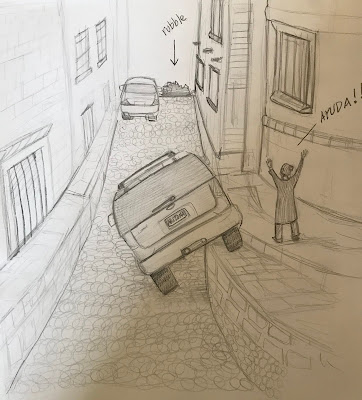 I got out of the car and shouted for help. It turns out the road was blocked.  They came running over and tried to calm us. We were pretty freaked out, the car was still slipping. People from the apartments started showing up and talking. Then the men in the car instructed Mike to put on the emergency brake and to stay very still.  One of the men managed to get his car around ours and drove off, the other man explained they were getting a line to tow our SUV.

After getting out, every time I tried to go back towards Mike they instructed me to stay away, "Muy peligroso!". So I waited, and waited. Then the men showed up with another larger vehicle and a metal rope. One guy crawled under the front of our precarious truck and literally tied the line to something under there. In my panic I'm shouting "Cuidado!"( and they are laughing at me). While he's doing this a stray dog wandered over and peed on the line. They pushed him away with a few choice Spanish exclamations! Then they tied it onto the other vehicle, accelerate, and .... YES! Four wheels on the ground. All the people clapped and cheered. As I'm going back to the car,  the man who spoke some English tells me "That lady over there did the same thing 2 days ago!" I don't know if that's true but  it sure made us feel better! Anyway, our car is too big for Mexico.
Email Post
Labels: Centro Historico cobblestones driving in Mexico El Centro expat Mazatlán steep hill
Location: Mazatlán, Sinaloa, Mexico