Last night Naomi was feeling good. Her first day of work as a teaching assistant was successful, even though talking to the children was challenging, because they mostly only speak Spanish and Naomi doesn't really. But she was hired to speak English to the children so that's what she did.

We decided to go out for a swim at the beach (2 blocks away) to celebrate. Mike sat at one of the restaurant tables on the sand with Oscar and Naomi and I headed out. What we didn't know was that this lovely vista was hiding some very strong riptides last night. Two different storm systems off the coast were creating diverging currents right there on the beach. 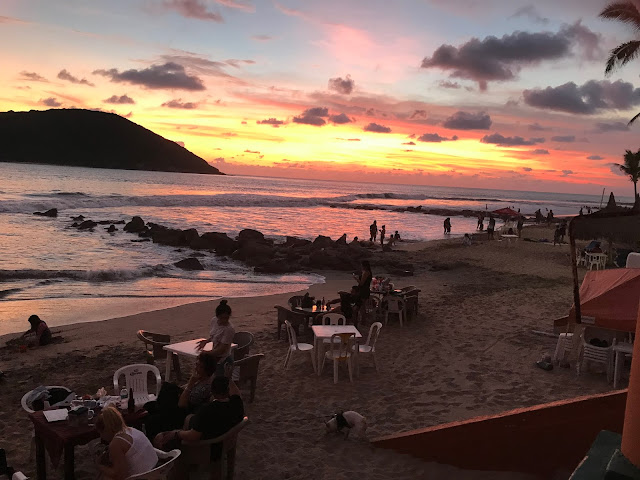 Naomi and I were riding the waves and talking. Near us were two other people who were together and talking and laughing in Spanish. I kept pointing out the rocks and we all tried to swim away from them. Soon we were very far out and closer than ever to the rocks. We kept trying and trying to avoid it, but none of us could fight the currents!
I was getting  little scared, when suddenly we were all descended upon by many young men with surf boards speaking way too rapidly in Spanish.  Three of the young men pushed Naomi and I to hold the surf board and brought us with the current past the rock peninsula to the other side and stumbling back onto the beach. They sat us down at a table and told us to rest. The other couple that was also brought ashore and past us quickly blended in with the crowd of beach goers that watched the whole thing with their mouths agape. Of course, Naomi and I are a couple of gringas so no blending in for us. No pretending we didn't make a huge spectacle of ourselves, so with hundreds of eyes on us we found Mike and Oscar and ordered some pina coladas and fish tacos and enjoyed the always magical sunset on the beach in Mazatlán.

Janet Blaser said…
Hola! So glad you and the other people were rescued from the rip tides and strong currents! I have many surfer friends in Mazatlan and they all have stories to tell of exactly what you describe. If you live by the ocean - any ocean - it's a good idea to familiarize yourself with what a rip tide looks like and also which beaches have strong currents. Saludos!

Carolyn Watson-Dubisch said…
You're right Janet! I just signed Naomi and myself up for some surf lessons and they promised me some safety tips. I just confirmed a minute ago and then saw your comment! Gracias.
September 30, 2019 at 8:12 PM