The last 2 days have been a frenzy of getting ready for Ireland. Mixed in with all that has to be done, I was teaching art camp right up until yesterday and then late last night I was contacted by Green Olive Arts in Morocco. The big dedication ceremony for my "Night Over Tétouan" sculpture was Thursday morning and could I write up a statement about my work in Spanish and send them a video of me greeting them in Spanish (the sculpture is being installed at the Spanish school.) ??

So I did it!! With the help of some Spanish speaking Facebook friends and Phoebe with her iphone and coaching, I managed to create something in time as well as get everything ready to go. 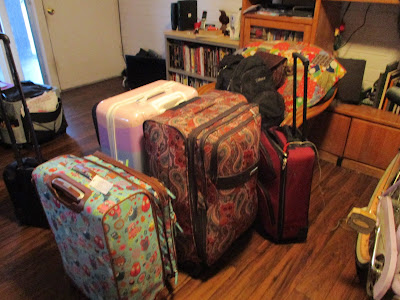 We also got Oscar (the dog) off to his petsitter and set the cat up with his bird videos (his petsitter will be stopping in 3 times a day- yes we have more than one!)

Then after hours of cleaning and packing and eating various random foods from the fridge that had to be eaten, we found ourselves waiting around, for hours!! The first flight was a redeye so we waited to leave.... And waited, and then it was time to wait outside.... 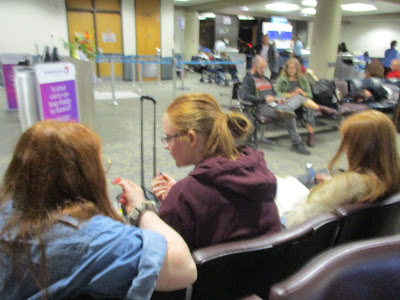 And now we're waiting by our gate. Just another 45minutes till boarding!!