Our second day in Ireland was about us very slowly convalescing from the journey here. 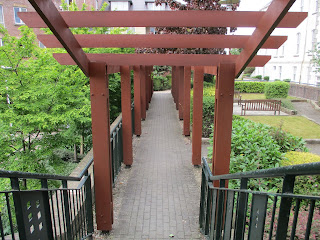 Mostly we stayed near the apartment in the Stillorgan area and searched for the local shops (a 15 minute walk away. Stillorgan's sort of a suburb of Dublin it turns out). This is the walkway in Linden Square, where we're staying. 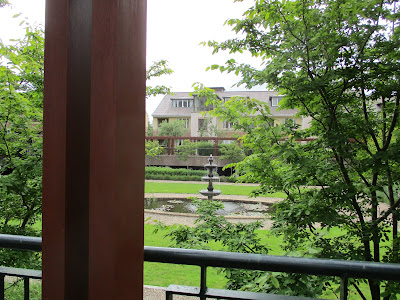 Even though it's a bit out of the way, the grounds here are pretty lovely. 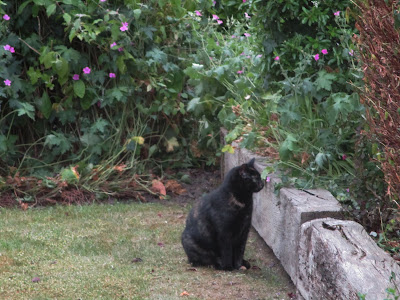 Also there's a cat. I'm pretty sure he lives here. 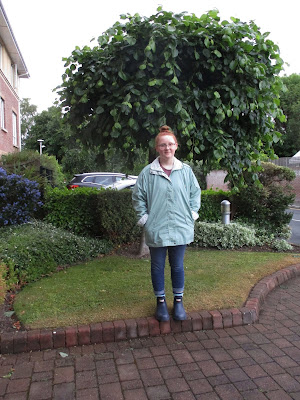 This early that morning. Naomi and I left to get groceries so we could start to feel normal and shake the jet lag. It was hitting us all very hard this time. 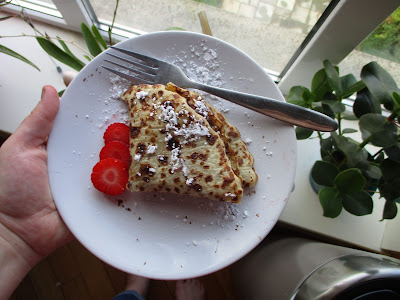 For some reason buying the ingredients to make crepes cheered everyone up. 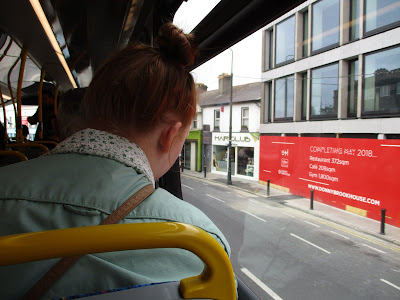 Today we took the bus into the city center to meet up with Will St Leger a local street artist. 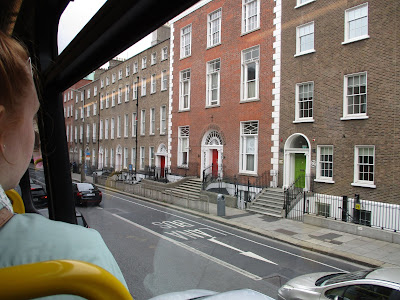 It was a 20 minute bus ride so I kept taking pictures, but these are the only two worth sharing. :) 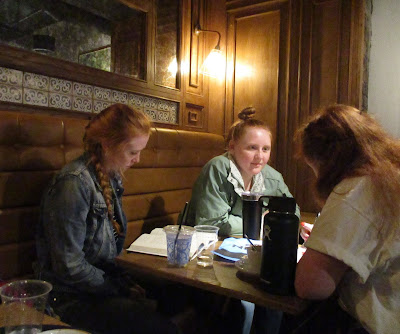 We arrived early, so we hung out in Cafe Nero a bit. 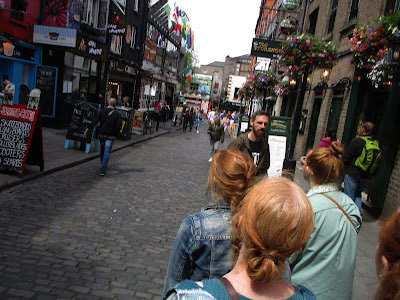 Before long we were back out on the street and Will brought us around to see some street art. 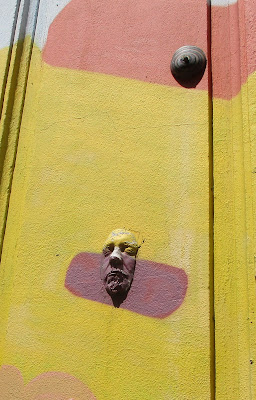 This is a boob and a face and a mural was painted on top of the face. These faces were mounted by an artist all around the city. The same is true for the boobs (2 different artists). It was a bit of a game to spot them. Naomi was the best at it. 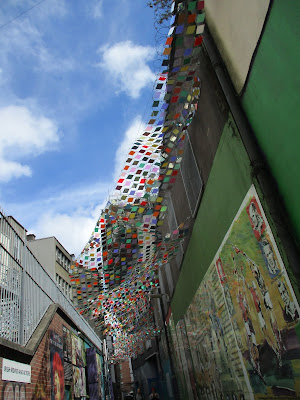 This was an incredible art piece called "The Flow" that was just installed in the last week or so. 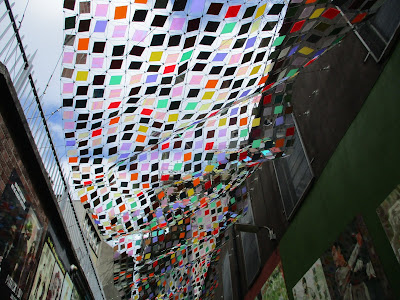 This is from below. The ligt coming through the plastic pieces changed the whole environment. 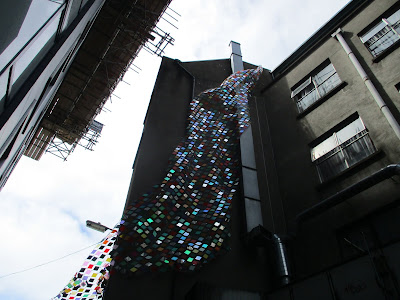 Then it wraps around up this building. 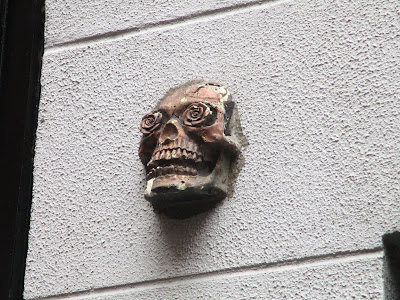 A "Dia De los Muertos" skull peaking out from a building. 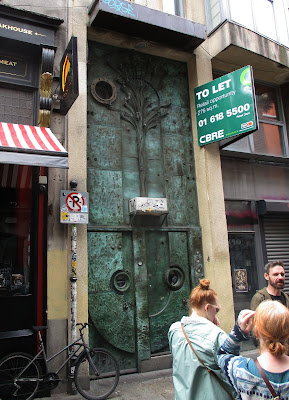 This is an amazing doorway, designed around a sink and pipes and faucets. 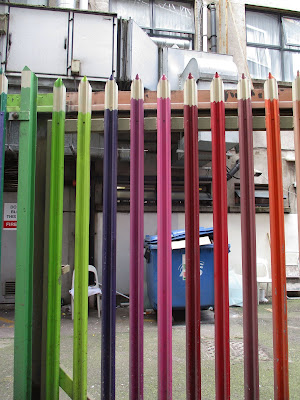 Everywhere there was street art in this part of Dublin. This is a fence in an alley. 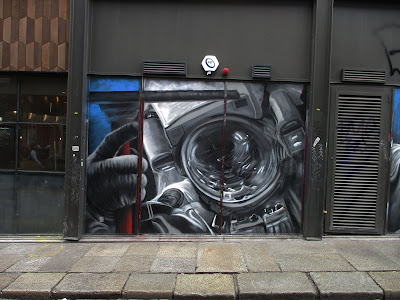 This painting of an astronaut was just completed 5 days ago. Will explained that while it was approved by the business owner, the city will eventually come and paint grey over the whole thing, because of city ordinances. It's such a shame. 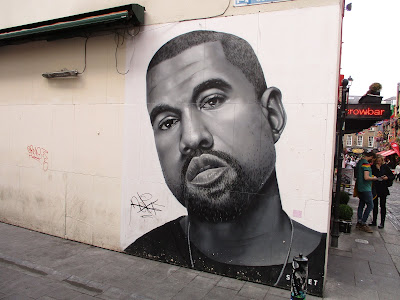 This portrait of Kanye was painted by a member of a coalition of artists fighting those ordinances. It's painted in grey as part of the protest to their grey walls. 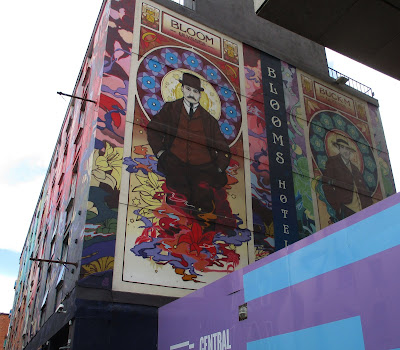 This is a sanctioned mural at the Bloom's Hotel. The entire building is wonderfully painted in honor of James Joyce's book "Ulysses". 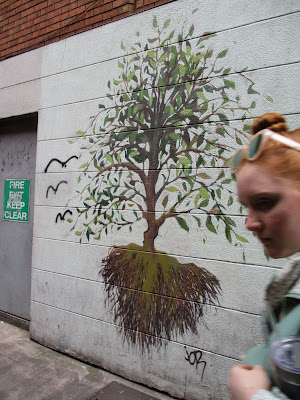 Naomi and a floating tree. 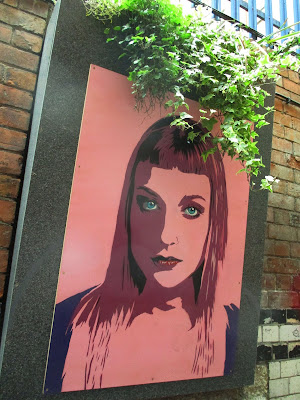 We went down this one alley that was full  portraits . Then we turned the corner and this street artist was painting... 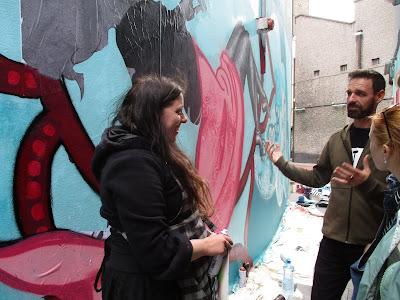 She was really very nice and part of a woman's coalition of street artists in Dublin. 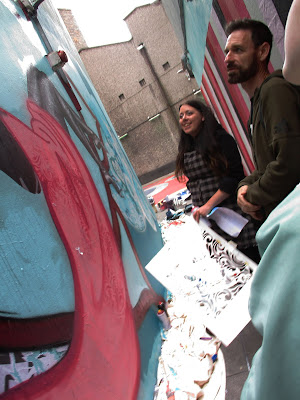 Unfortunately I didn't get any good shots of the work! 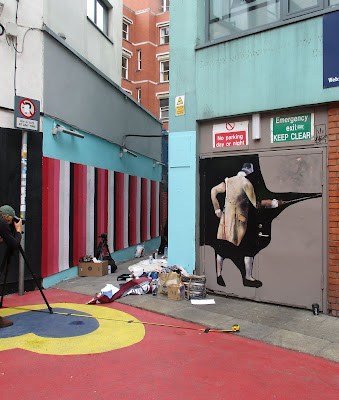 As we stepped around her work, you can see a friend is filming her on the left. 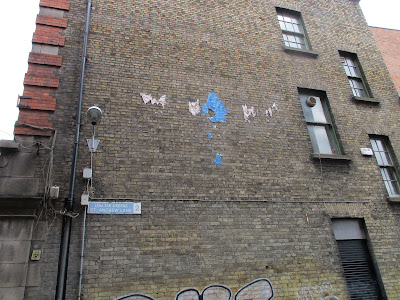 This is what is left of one of Will's murals (the blue and white pieces on the wall). As you can see even when an art piece has all the permissions, Ireland's weather does a number on the local street art. Fortunately Dublin's street artists are busy every day repainting and creating more!!