They changed the name from Junior High (from when I was a kid) to Middle School. Unfortunately that's all that's changed. It still sucks. The teachers expect the worst so they're super strict and the kids, well, they all have "issues" as my daughter says.
Yesterday she came home from school and asked me if she's ugly. Apparently the boys have been calling her that "behind her back" and all of her "friends" thought she should know. The rest of them call her carrot. She's taken to asking me if we could move to Ireland or Scotland, where there are other redheads.... Oh well.
At least she's in Tae Kwon Do three days a week and has a constructive way to release her aggression. She has been winning all her sparring matches! 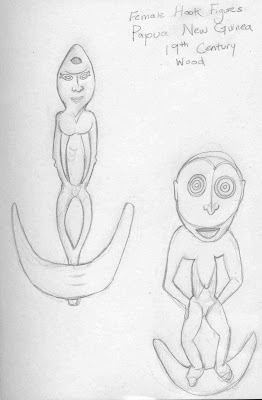 Today we got in some time at the Art Museum and I managed a sketch or two. These things are called "Female Hook Figures" and are from Papua New Guinea.
Definitely not fertility totems though... I couldn't even tell they were female till I read the description.:)
Email Post
Labels: Art Museum artifacts drawing Middle School school Tae Kwon Do teasing

Anonymous said…
Kids will be kids, I guess. It's good to know that school's still as 'character forming' as when I was there.