These are the stunned words of my daughter, Chloe, tonight as we sit groggily in our airbnb rental in downtown Casblanca. Everyone else is sleeping (I think....I hope).

The night we spent sleep torturing ourselves in Lisbon airport was one one the worst I can remember. Of course having it come after a night flight over the Atlantic in coach made it misery. We came to hate that airport, with it's lack of reasonable places for one to lie down, and of course the relentless fatigue that comes with staying in public places for more than 36 hours. 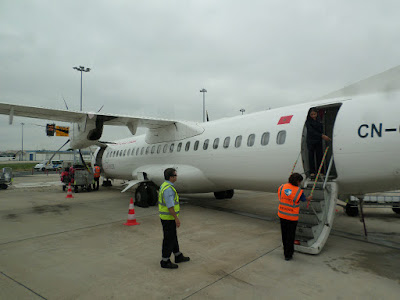 After 22 hours of waiting we were finally boarding our flight to Africa. It was a very small propeller plane and it looked at least as old as me. 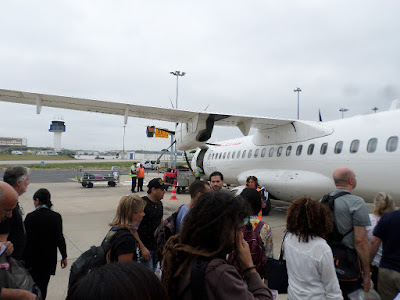 We took a shuttle bus out and boarded from the tarmac. We were so tired it's hard to think about how I was feeling then, but I was really glad to be leaving Lisbon. 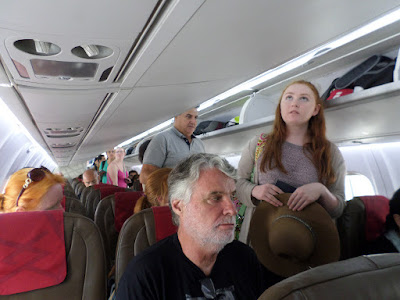 Phoebe finding her seat onboard our final flight. 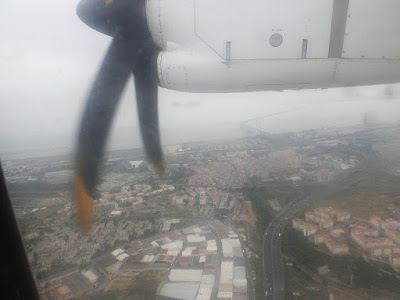 We all immediately fell asleep in the air. Unfortunately it was a short flight, and I woke again near the end to peer out the window as we flew over Africa. 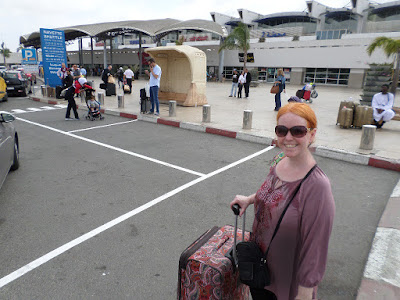 Passport control was epic at the Casablanca airport, the line extended on and on, but our luggage was still waiting for us (unlike in Lisbon where they locked it away and hid it). Even better our driver was waiting for us as we stepped outside. 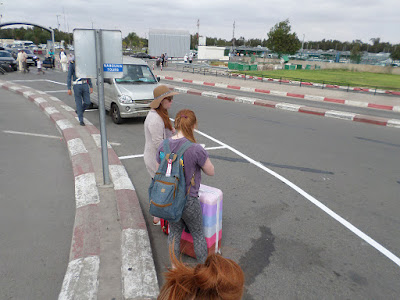 We all waited by the curb as he brought the van around, while we pondered the nice apartment I had booked, with actual beds! 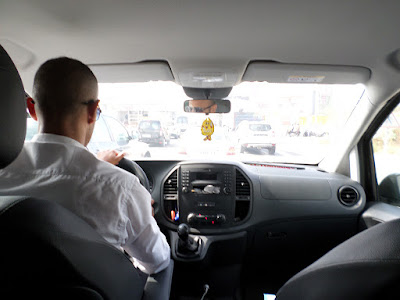 Then our driver got lost trying to find the place. The address was confusing and he spent 15 minutes on the phone talking to the owner's brother in kind of a loud voice. We were all sort of drifting in and out of wakefulness. There was adrenaline arriving in a foreign city, but it was fighting with more urgent needs to sleep and eat. Casablanca in it's center is a mad place to drive to say the least.

Finally he pulled over. We stood waiting on the street for the woman who had the keys to the flat.
She had a very sweet baby in her arms who waddled about on unsteady feet as she brought us from room to room.
After a surprisingly organized effort to get everyone showered and sort out the wifi. Mike, Naomi and I discovered we were awake enough to try to find some food and get some cash, so we wandered up the street and tried to procure some simple food. The bakery was the most successful, we found fresh bread and cookies for our train journey tomorrow and some special treats that are only available for Ramadan. We also learned from her that Ramadan is starting either tomorrow or the next day depending on the size of the moon (it must be the smallest sliver after the new moon). We also bought some very expensive mangoes from a street vendor (like New York prices, we were too out of it to try to bargain) and some juice and water and street corn on the cob. 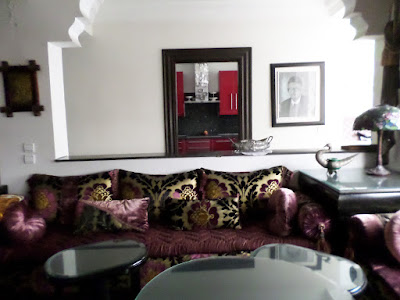 As Mike and Naomi brought the food in the kitchen, I sat down on this couch. I then slept for quite sometime until I fell off it and Mike brought me to our bedroom to lie down. 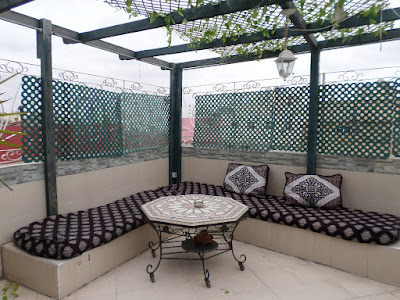 I awoke at 11pm. Alone in a strange place. Prayers in Arabic were echoing through the city, and into my window. I stumbled around the strange place and finally found Mike sleeping on the patio, the room was too hot.  I wish we were done with our travel for now. Or that we had two nights in this apartment like I'd first planned, but tomorrow, we will try the train and head into the mountains to Tétouan.
Email Post
Labels: Africa airport Casablanca customs flying Lisbon Morocco passport control Portugal propeller plane