For our last days in Mexico we explored the waterfront and pondered riding the horses that walked up and down the beach by our house. No one could agree when to go, and in the end we didn't do it... ( I know lame). 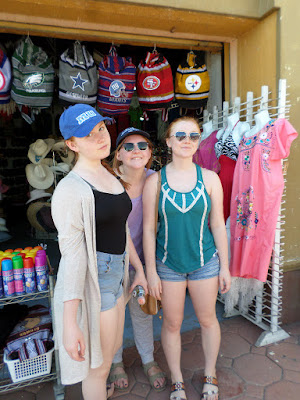 Checking out one of many vendors by the port. Probably one the only pictures of all three girls in one place I've seen in a long time! 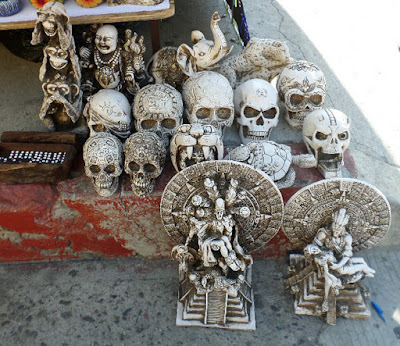 The skulls on the sidewalk. These were so cool when I first saw them in a window, but then like many things for sale in these markets they lost their charm after seeing the same ones carried at five or six shops. At least in Argentina in the "mercado artesanal " the products were of a similar vein but they were handcrafted by each artist at the stalls. 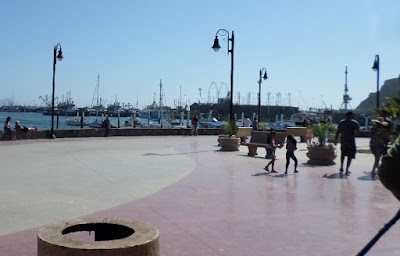 The port was a busy place even when a cruise ship wasn't in town especially on the weekends. Families from all over the city came down to walk near the water and get dinner. 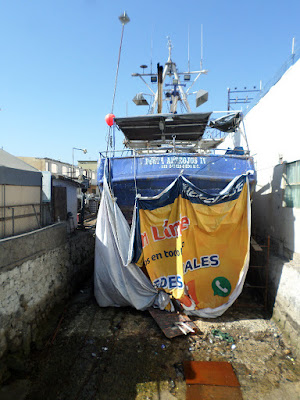 After walking in the sun for a few blocks we decided to duck into alley and found the fish market.. 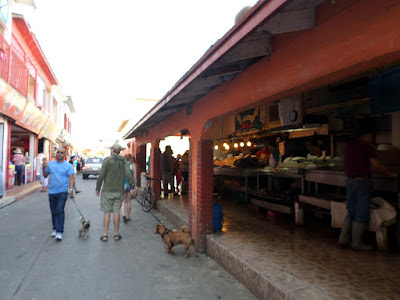 Mike and Oscar by the fish. Mexico is actually very dog friendly. Dogs can go on beaches, in restaurants and shops, as long as they stay leashed. We found this to be true here, in Puerto Peñasco, and in Juarez. 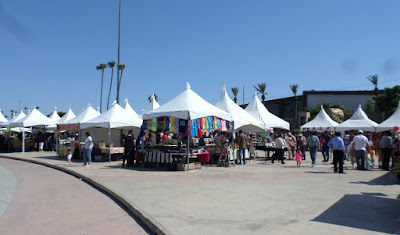 In the square a market had sprung up over night. 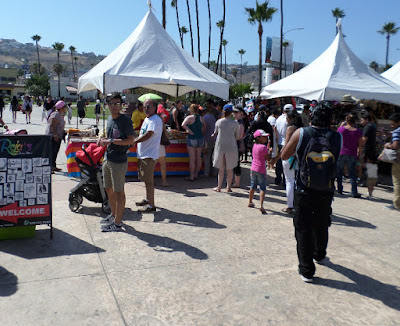 We milled around the market buying tamales and studying various crafts and products (mostly the same ones from the downtown area, but now in tents). There was also a little train going around for children, and these odd giant plush toys with wheels for children to ride. 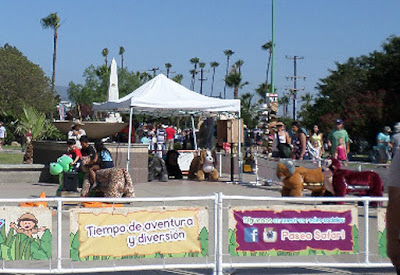 Shopping in foreign supermarkets is something I actually enjoy doing a lot. It's surprising because I hate going to my regular supermarket.  Anyway we discovered that the banana code we punch in at our local Safeway is the same as the one the guy at the local market in Ensenada punched in to his register when we purchased bananas ... 4011. It turns out this is the international banana code for all supermarkets everywhere! 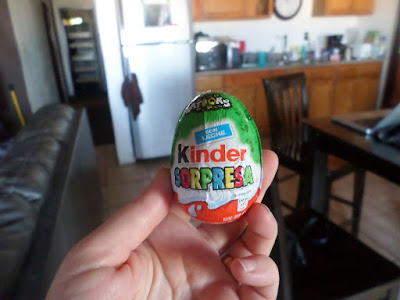 In the supermarket I also came across these.... Chocolate surprise eggs!! My kids had an ongoing relationship with these when we lived in Argentina. They loved them! I insisted on buying a few as they are contraband in the US. Mike was sure the girls are too old and don't care anymore. Boy was he wrong -they were thrilled! They even liked the kiddie prizes inside. 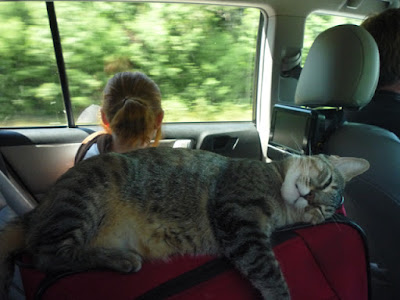 Finally the moment came that we had to pack up and leave the house we'd been renting. Our cat vanished in the first 10 minutes of arriving the week before and we'd waited, and waited for her to return like she always did. She's a traveling cat and has been for a long time. We adopted her as a kitten when we lived in Bariloche, Argentina. She's slipped away on road trips before, in Sedona, the Grand Canyon and once right out of the car into the woods in Wisconsin, but Isabella always came back. Usually with a dead mole or a lizard. Anyway, we had to go and take solace in the fact that she's been micro chipped. Hopefully she's found a nice family in Mexico. 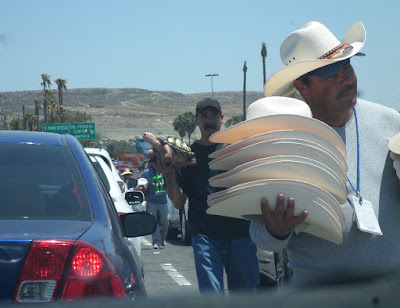 The ride out of town alternated between stunningly beautiful with views of the ocean and the mountains, and complete horror. At one point traffic slowed down as cars crept past an accident. There on the pavement was a motorcycle on it's side next to a body covered with a bloody sheet.
Then more miles of the beautiful coastline, till we cruised into Tijuana and saw an impoverished man in the street missing most of both his arms.

After getting lost in Tijuana on the way in I studied and studied the directions and even insisted we buy a map. Then of course everything was well marked and went completely smoothly. In no time we were waiting at "la linea" to get across the border. The man in the photo is a hat seller working the line. 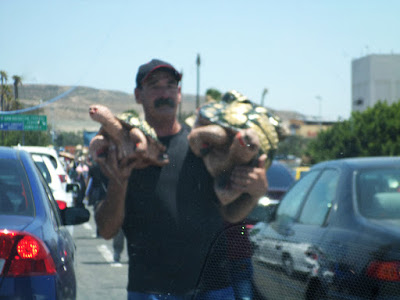 Vendors walk up and down the line of cars while we wait. At first you groan, because you want to just cross and not be bothered, but then the hours tick by and you find yourself buying ice cream, and churros, and running out of pesos! In the end you're glad they are there to distract you from the crazy wait for crossing one of the busiest borders in the world. 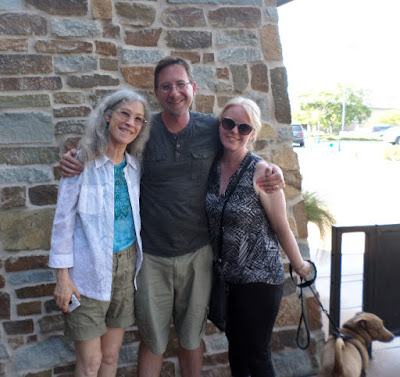 After getting through to San Diego we met up with Mike's "step mother" Claudia. The plan had been to see his father Russ too, but Russ passed away earlier this month, so it was a very melancholy visit.

Then we dropped off Chloe at the house of an old friend from middle school. Heidi's high school graduation was the next day and Chloe was invited to go and stay for a visit.  From there we began the epic drive back to Phoenix. We rolled in to 108º heat at around midnight. Gotta love returning to Phoenix in the summertime!
Email Post
Labels: Artisans market border crossing cat El Centro Ensenada farmer's market fish market international border San Diego