Radioactive pee and other news

I figure if say this post is about pee straight-away then you know what you're getting into when you start reading.  For the last week or so I have been in pain.  At first just mild cramps but then.... really a lot of pain. I've had this pain before and I thought, yes this could be one of two things.  Another UTI or another ectopic pregnancy . In the desperate hope that it's a UTI, I cut out coffee over the weekend and just had a very small amount as the kids returned to school on Monday and we began another week of 5:30am wake ups.  I started taking a product called Azo to control the pain until I could get to the doctor. It all worked well enough, except that Azo has the unfortunate and somewhat alarming side effect of turning one's pee neon orange.

On Tuesday morning I sat in the doctors office and after filling out a packet of forms the size of a bank loan, they asked me to pee in cup.  I offered up my glowing, radioactive sample and set it in the lab next to less impressive, boring ones lined up on a shelf.  The great news is that I'm not pregnant, the other good news is that they ordered up some antibiotics right away to get things in order, the bad news was they want some of my blood because my neon pee was screwing up some of their tests.  God I hate getting poked!

Other possibly more interesting news than what color I'm peeing today is that I have a new article from The Examiner out here! It's about the glass blowers of the Spanish Village. 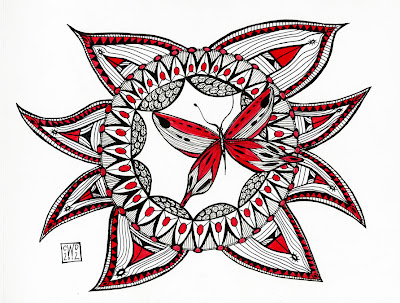 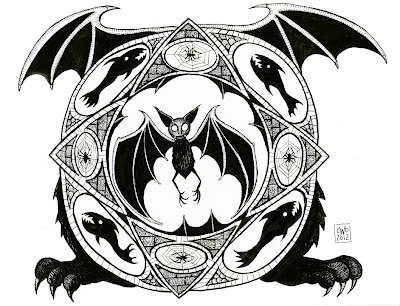 If you've been following my blog you know I've been drawing a lot of mandalas lately.  Well, it looks like some of my designs will be licensed for T-shirts by a company called Skurvy Ink. YAY!

OneMommy said…
I had no idea it could do that!