Nunsense, and a day at the clinic.... I finished the final two backdrops on Thursday in haze of exhaustion. 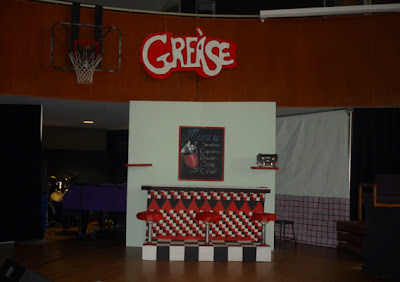 Here you can see one of them set up on stage (it works as a hallway stretching behind the set pieces.)  The other two are more interesting.

Friday was spent at the clinic with Naomi (they couldn't give her an appointment on Thursday).  It turned out she needed an x-ray.  When they discovered we were cash pay they signed her up for a special temporary health insurance for kids.  Which is good as they prescribed antibiotics as well (last time they cost almost $100.00). Anyway they tortured her by poking a hole in her nail to relieve the pressure (I say tortured because the nurse was doing it wrong and by the time they found a doctor who knew what to do Naomi was terrified and cowering in the corner.)   Once he did this though she was doing much better and went back to school.  She also slept through the night! YAY!

Today Chloe joins other hand selected kids from her school to draw at the chalking festival in Little Italy.  It's a huge event that I've been wanting to see since we moved to San Diego! Hopefully I'll have some great pictures of the festival and Chloe's team to share.

Last night "Nunsense" opened. I couldn't go as I was teaching my class, but tonight we'll be there for the second performance.  This should be a great weekend- Ciao.
Email Post
Labels: backdrop doctor Gesso Italiano festival Little Italy Nunsense sets

♥●• İzdihër •●♥ said…
Hope everything be fine at your side. New to your blog.