Drawing in the streets of Little Italy! Òttimo! 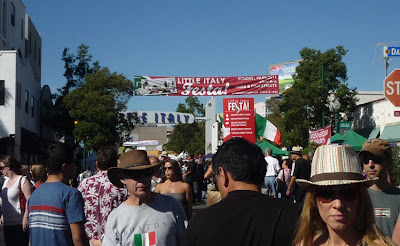 This weekend was the Gesso Italiano Festival in Little Italy .  It's one of two huge sidewalk chalking festivals here in San Diego, and Chloe was one of the kids chosen to represent her school, and create a masterpiece on the hot pavement. 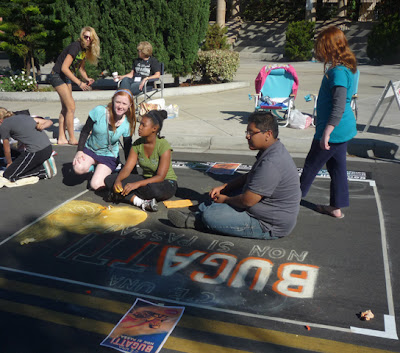 Here she is with some of her other team mates on Saturday morning. 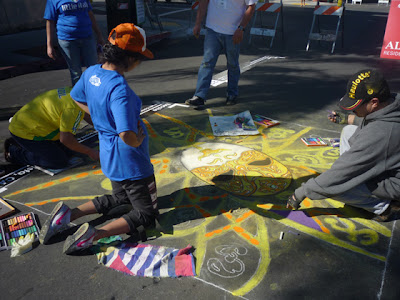 The teams all had to create a work of art that has an Italian influence or is a reproduction of an Italian master. 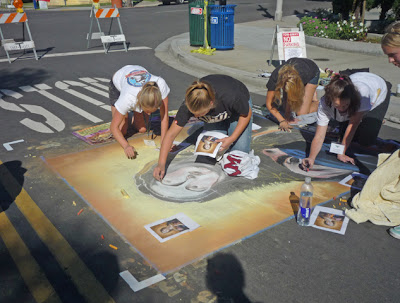 This one appears to be the Virgin Mary. 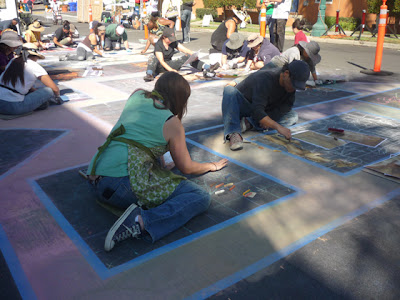 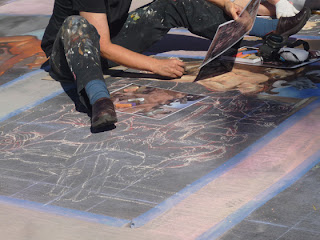 There was a large collection of artists nearby that were recreating the Sistine Chapel. 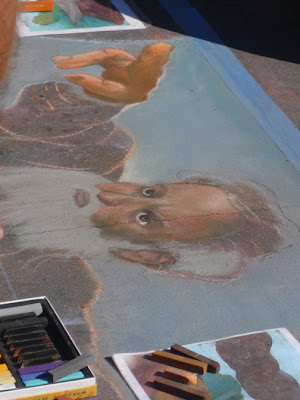 The cracks in the pavement really added to the illusion. 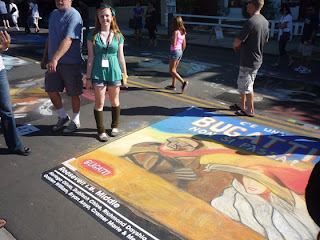 On Sunday morning the mural by Roosevelt I.B. Middle School was complete. I think they did an amazing job! 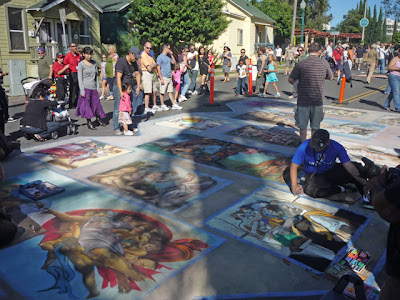 The Sistine Chapel came out pretty good too! 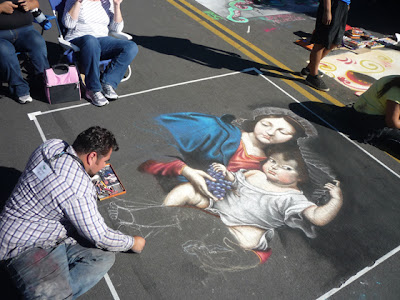 Some artists, though were still busy working even into Sunday. 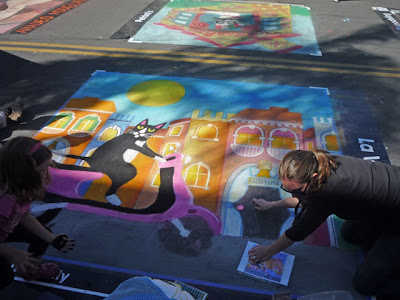 This was one of the more contemporary images created by a family that participated. 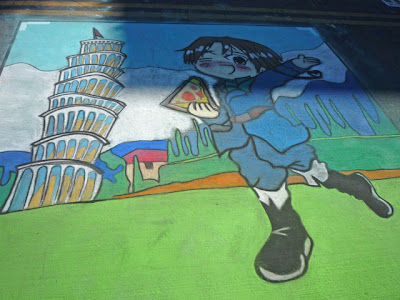 Of course this was my daughter's favorite... Anything manga! 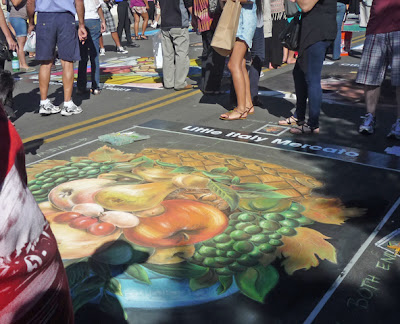 The fruit basket was flawlessly done. 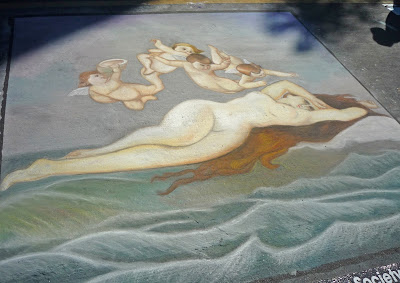 This was a great event and an incredible festival.  I was so glad Chloe had a chance to participate! 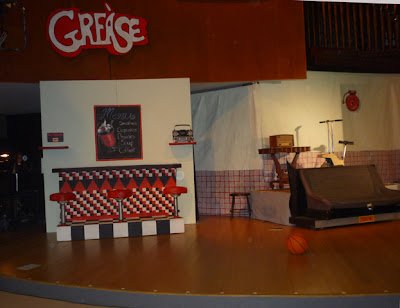 On Saturday night we went to "Nunsense" and saw my sets in action. 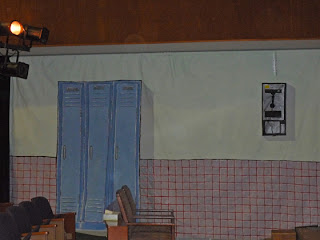 Before the show I snapped some photos of my backdrops hung up. 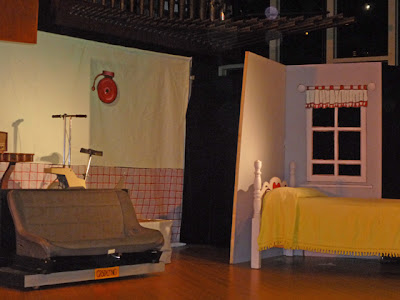 For boring paintings of a school gymnasium they looked pretty good. 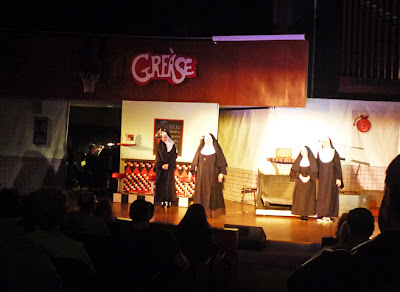 The nuns are pretty bleached out in this shot... Sorry. 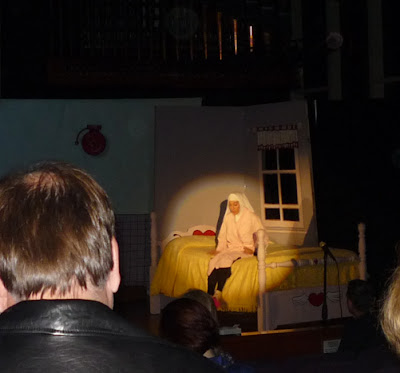 It's a pretty cute show. 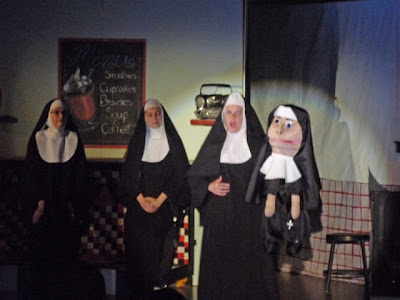 I really liked this nun puppet (made by Pam in the costume department).  The play runs for another week.  If you're in San Diego be sure to get your tickets!

Yesterday was really crazy.  Mike was rear ended while stopped at a yield sign  and now our bumper is quite crooked. By evening we needed to run to the art supply store and since we'd had enough driving for the day we walked.  After shopping a bit we decided to stroll up to the manga store as Mike had a gift certificate.  While we walked Phoebe talked (and talked and talked about her friends and school).  I was listening carefully to her and didn't notice the people up ahead running out of the manga shop. When a car squealed and I looked up at the crowd around me, all standing and staring off towards the sound.
Then there was Mike saying "Did you see that!!"
"No." As a distraught young woman came stumbling back to the shop holding one of her shoes.  A man had just run into the manga store and stolen the sales girl's laptop.  Of all the things to steal he stole the one thing there that wasn't covered by the store's insurance.  That poor girl looked miserable.  After that we decided to head home as the shop girl was in no shape to sell us anything. Mike hadn't seen enough to be helpful to the police and I missed the whole thing.
Anyway, Mike has a new website up and many things for sale in his shop! Be sure to check it out. :)
Email Post
Labels: chalk chalk festival Gesso Italiano festival Little Italy Looking Glass Theatre manga Nunsense sidewalk