On a field trip with the 4th grade, the radio show is back and more on my monster

Recently I chaperoned a field trip, with Naomi's 4th grade class to the state capitol.  As I sat in the Capitol Park scarfing down my mushy sandwich I'd packed in a mad rush that morning, the girls next to me began feeding the pigeons.  Wild eyed and manic some boys from the class rushed over.  The one in the lead shouted "KEVIN!" running with his arms out wide. The birds flapped off over my head and I hunched down, hoping not to get shat on.  The pigeons gathered across the square, by other students and the boys rushed that way.
"KEVIN!"
"Hey-hey! That's not Kevin!" another boy urgently shouted pointing at a different bird.
The birds flocked again to yet another corner, and off the boys ran towards them again, shouting for the elusive Kevin.  Then again, and again...Twenty minutes later we boarded the bus with remarkably clean hair!

Today is Phoebe's first rehearsal for her school play.  She's got the second lead and is extremely excited.  I'm really looking forward to seeing her perform.

Last week we had our first "Art of The Red River" show for the year!  It went extremely well and we had some wonderful artists as guests.  Children's book author/illustrator Rose Cooper joined us and shared some fascinating stories about her childhood as a mortician's step daughter.  Then we had painter Aiden Cole join us for some great insight about being a creator during the 70's.

Progress on my sculpture "The Jelly Monster" is slow and steady. (Mostly because I only work on him during the weekends.) 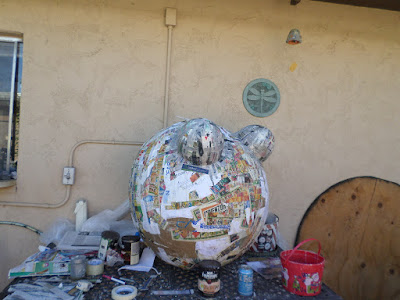 Here he is with his eyes attached. 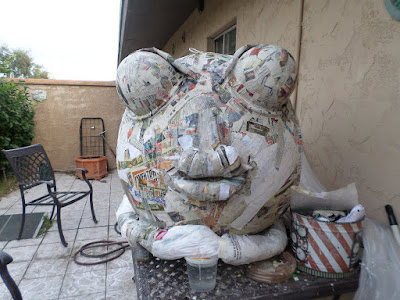 As you can see his face is taking shape.  In the meantime I'm making slow progress on my children's book deadlines. (Though I'm getting tired of painting Santa Clause and his elves, thank god the other one's about dragons!!)
Email Post
Labels: Art of the Red River field trip Jelly Monster Mutant Piñata Show State Capitol The Capitol Museum