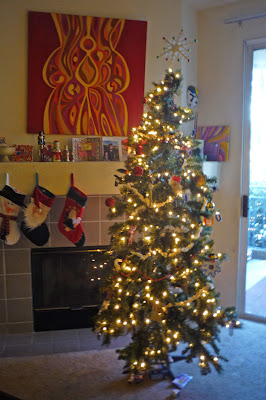 This is my plastic Christmas tree.  We bought it last year after my noble but sadly unsuccessful attempt to keep a potted live tree on the patio (I killed it in less than two months).  Unfortunately my cat likes it a little too much.  What she really likes is to chew on it.  I don't know why she likes eating plastic, but since it seemed like a bad idea to me, I, of course, turned to the internet to solve my problem (I don't really remember what we used to do back in the days before Al Gore invented the internet). Anyway, the internet told me to spray it with tabasco sauce.  Well, I don't have any of that, but what I did have is a big container of chili powder.  So I mixed a large amount with water and brushed it all over the tree.  My kids think it smells like Mexican candy and my cat stopped eating it, as she hates candy.

Just over a week ago we had our final show of the year of "Art Of The Red River".  Our guests were photographer, Michael James Butts, calling in from Boston, Massachusetts, and Andrew Farago curator of The Cartoon Art Museum in San Fransisco, California. It was a great show worth listening to!

I'm going to be the set designer for Looking Glass Theatre's spring production of "Once Upon A Mattress".  On Monday I met our new director at our first production meeting.  I think this show is really going to be incredible so stay tuned for photos of sets in progress!

Also on Monday I took Chloe shopping for a dress.  She needs it for her costume in her school play.  Their show, "Little Shop of Horrors" hits the stage next week just before Christmas break.  As I stood waiting outside the changing rooms for her I listened to a woman talking nearby.  She was describing how she collected pine cones and brought them home to put in her microwave.  She said they filled the house with the pine scent  of Christmas that she fondly remembered from her childhood.  When I heard this I began to picture my kids in 20 years attempting to make their house smell like Mexican candy.  Hmmmm....
Email Post
Labels: Art of the Red River Cartoon Art Museum cat christmas Christmas tree Looking Glass Theatre Mexican candy Michael James Butts Once Upon A Mattress

littleyana said…
Hi, your tree looks funny but its everything christmas should be (glittery and colorful. Your idea of keeping the cat away from the tree is new to me. so thanks for sharing!
December 8, 2011 at 5:05 PM

TinMan said…
Wonderful story. Maybe your cat has plastic anemia syndrome? I just made that up. I remember my mother putting liquid shoe polish on my fingernails to get me to stop biting them. Horrible taste but pleasing smell.

I am glad you are excited about Mattress. We will definitely work this time to get a team to help you paint, etc.

Do you want to send me info about Chloe’s show that I can share with the group?

Sorry you missed the cast party. We have a little something for you to say thanks. Maybe see you at church Sunday or next meeting - give it to you then.

turq said…
So the chili powder works...I have a lot of pictures on our cat in the tree, or reaching up playing with it. Very Cute pictures and great memories.
December 9, 2011 at 6:57 PM