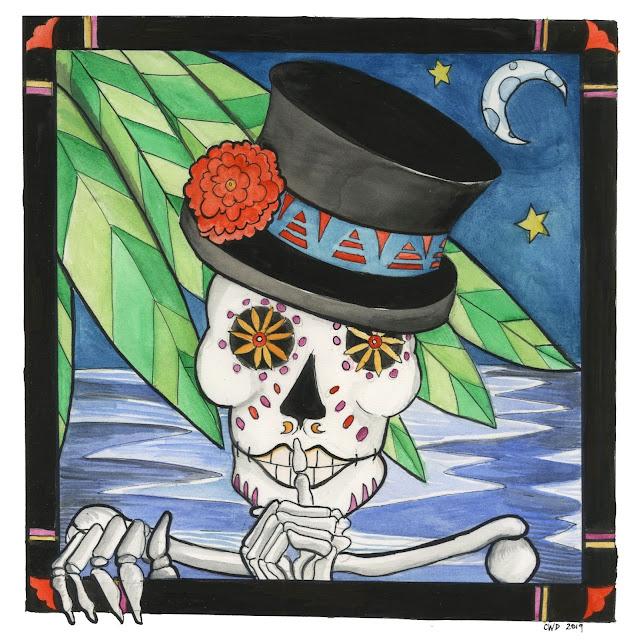 I created this painting for the Galería Rubia in Centro for their Dia de Los Muertos exhibit. I managed to get it framed and drop it off and get it in the show, but I didn't manage to read to Spanish announcement properly and missed the opening. At least the show is up for the whole month. 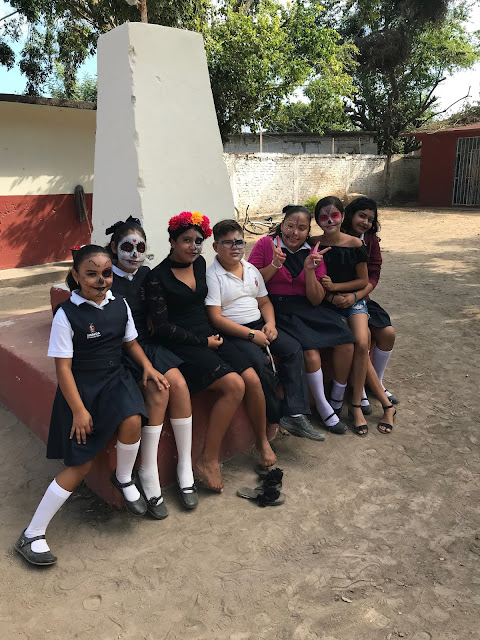 On Dia de Los Muertos I was invited out to Walámo to be a guest judge for the altar building contest. 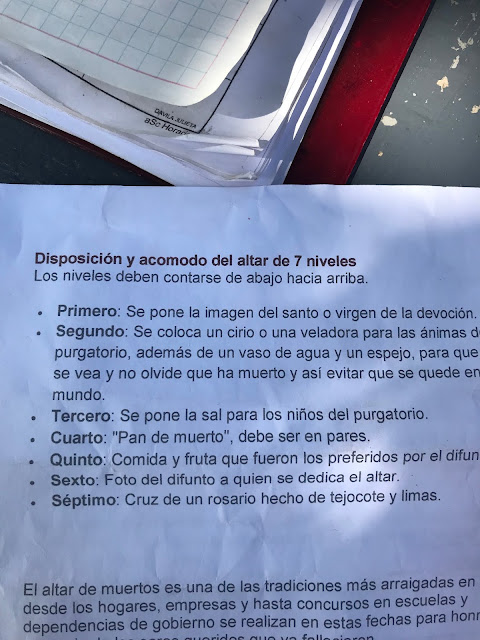 I was nervous because my understanding of the meanings of the different aspects of the altars is very slim. Fortunately they gave me this list of requirements:

First Level (from top or bottom): Image of a saint or the Virgin
Second Level: A candle, a glass of water, and or a mirror to remind the dead they do not belong here and must return at the end of the night.
Third Level: A pile or dish of salt for the "children of purgatory" (I'm sure there's more to that one but I don't know what it is)
Fourth Level: "Pan de Muerto" -a special bread they make here for the holiday- must be 2 of them
Fifth Level: Food and fruit that the person enjoyed in life
Sixth Level: Photo of the person
Seventh Level:  Rosary,  and cross made of tejocote  (a root ) and limes.

The point of Dia de los Muertos is to prevent the third death. In Mexico they believe in the three deaths. The first is when your body dies, the second is at the funeral and the third is when the dead are forgotten. Disney made a whole movie called "Coco" about it, they also tried to trademark the name "Dia de Los Muertos" which is profoundly offensive but, anyway.... 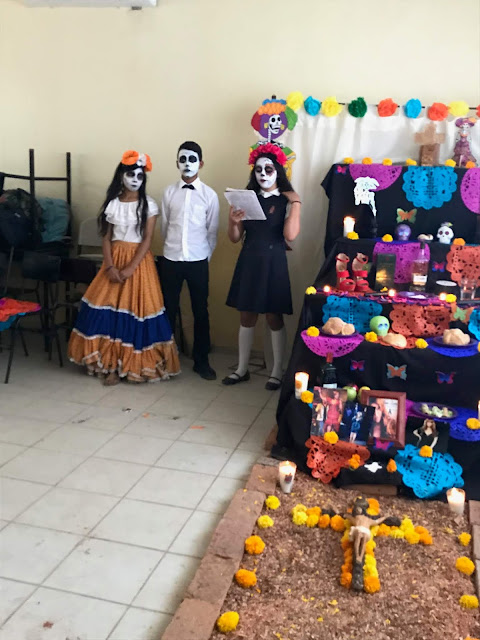 This is one of the groups presenting. This altar is for a popular singer. I felt bad because I could see the kids worked hard on their presentations, but unfortunately my Spanish is just not there yet. I got the jist though. 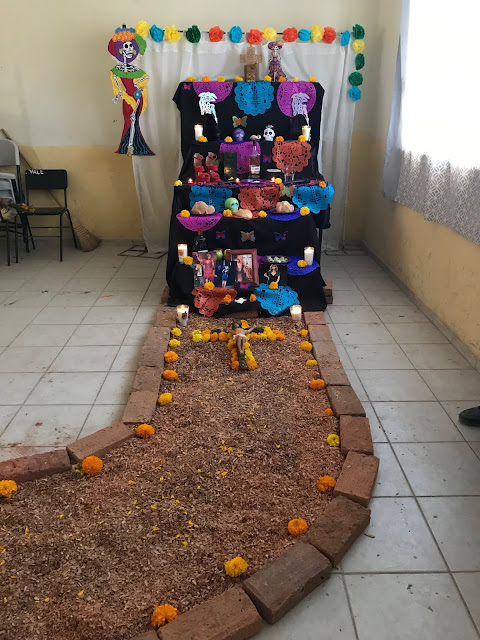 The path on this lead all the way to the door of the classroom. It made an incredible impression. 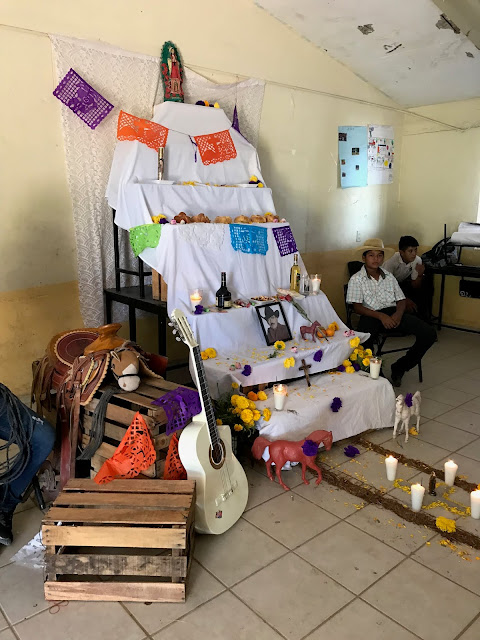 This one is for another singer. The whole class puts a lot of effort into each one. 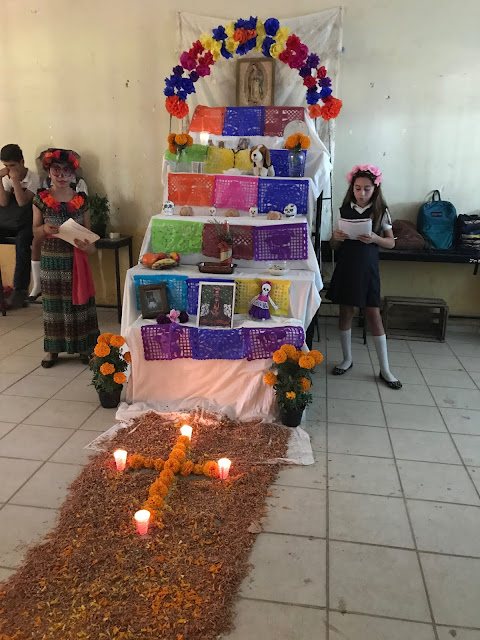 This class won first place with their altar to Frida Kahlo (who will never have a third death based on all the altars I've seen for her). 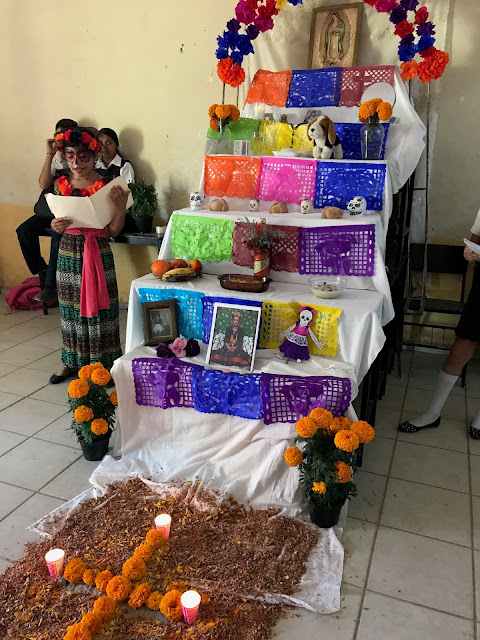 Overall visiting the school again and participating in something like this was such an honor. The kids did an incredible job! 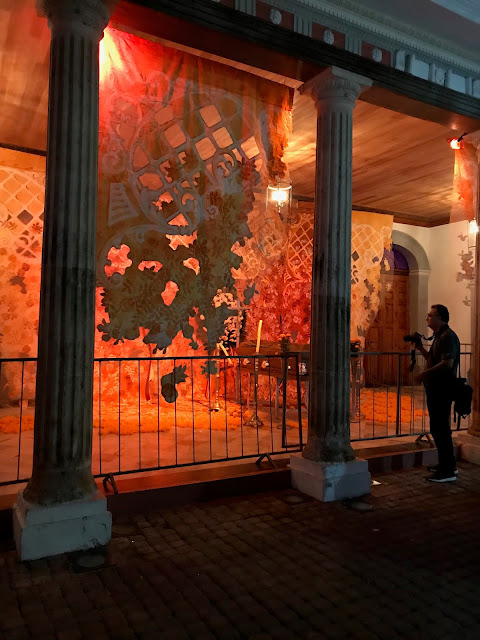 That night we went to Plaza Machado to check out the festivities and decorations in the center of town. 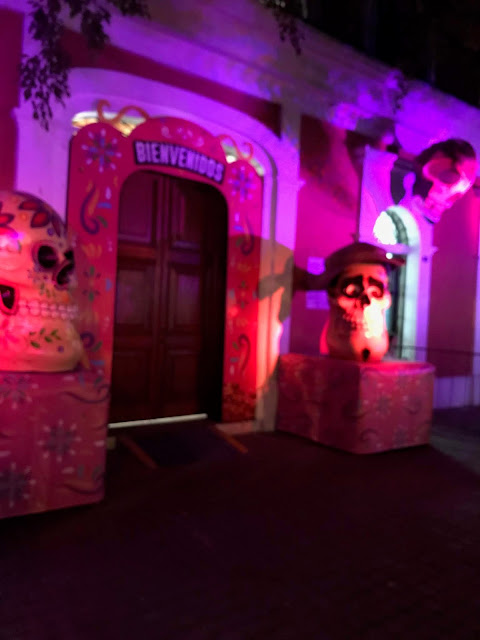 There was clearly a lot going on. 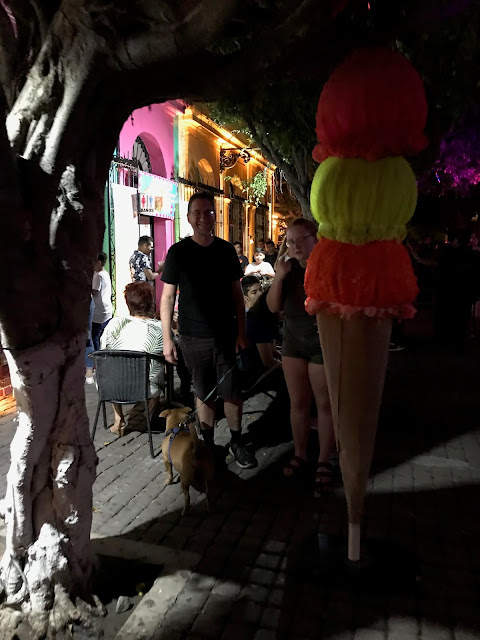 We made our usual mistake of bringing the dog. It made it difficult to go inside different places and find a place to eat (Oscar however had a great time!) 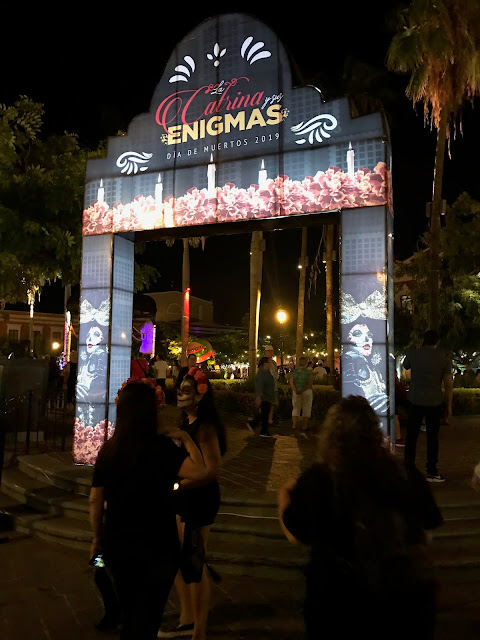 The plaza was decorated beautifully. 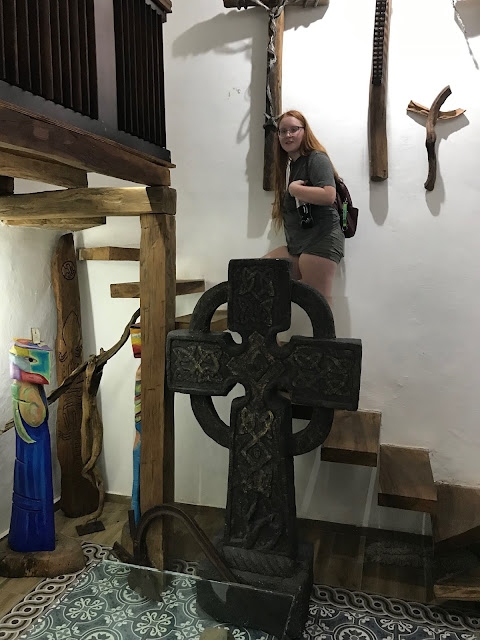 Naomi in the gallery on the "floating stairs". 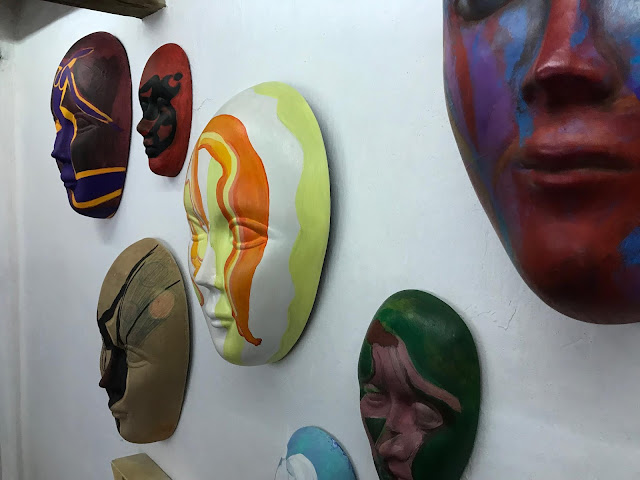 Painted masks in the upstairs. 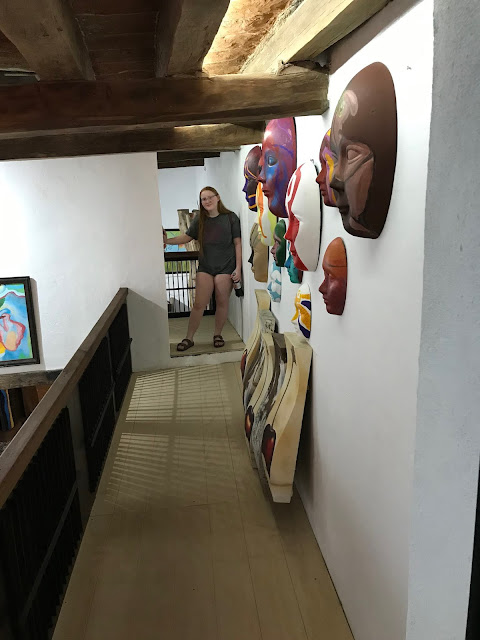 Naomi down the hallway. 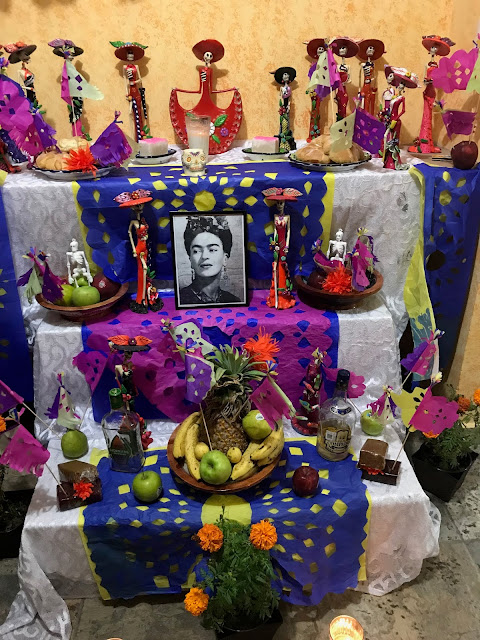 Another altar for Frida (now I look for all the requirements and this one is missing a bunch of things!) 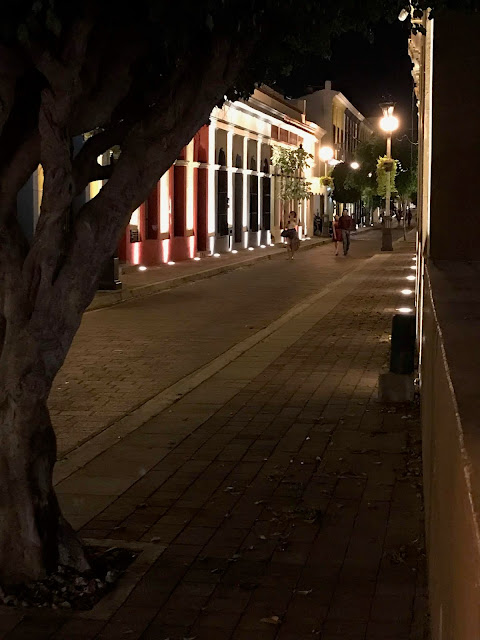 We had a great night, and are looking forward to many more nights here (cooler ones) now that it's November. 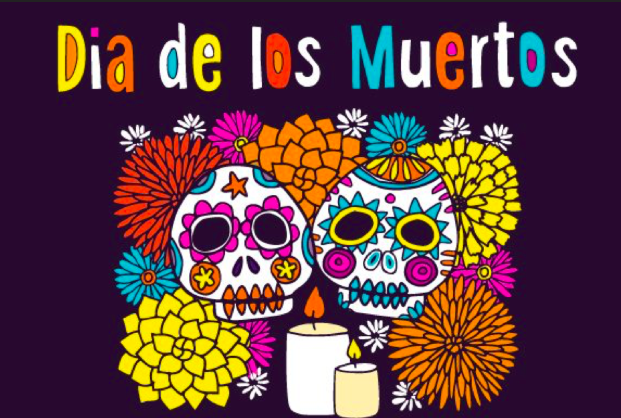