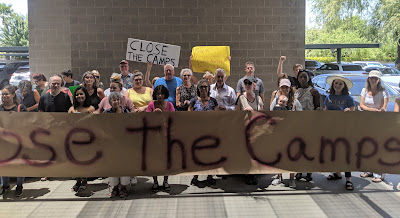 On Tuesday of this week Phoebe and I went to our State Representative, Greg Stanton's office to talk with him about the conditions at the detention centers for people fleeing violence in their own countries. 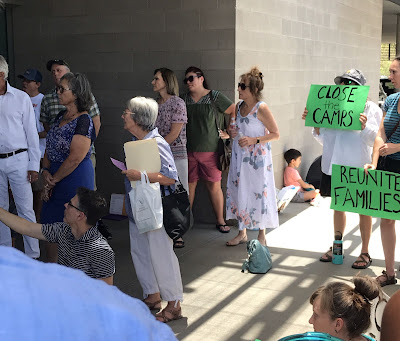 For us, living in Arizona, I feel we have a special responsibility to find out what is really going on. This is not just about child (and baby) prisons on American soil. This is about government sanctioned child abuse in our neighborhood. If you look up immigrant detention centers in Phoenix, there are at least four. 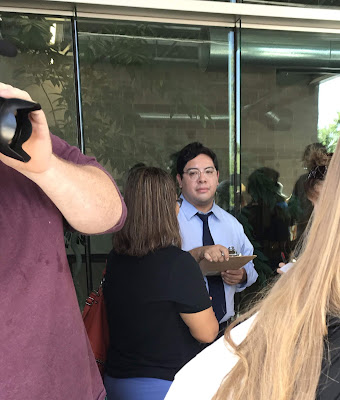 As you can see here a member of Rep Greg Stanton's staff did come down to address the crowd's concerns. He was probably sweating like crazy in his suit as it was 109ºF (nearly 43ºC). To be honest, though, we were all sweating like crazy! As you can also see PBS was there filming the event.

It was a very informative and I did learn about upcoming events and groups that are trying to make change. There's a group run by immigrants called Puente fighting for human rights and another called Poder in Action  in Phoenix which has a lot going on and helps people who need legal advice to reunite their family . 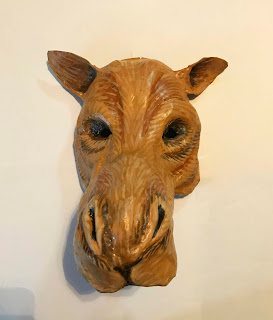 In other news I shipped off a ton of masks to New York for the Noah's Arc Opera, and have managed to move on to other orders. Also I'm hauling things off to Goodwill in preparation for our big move. 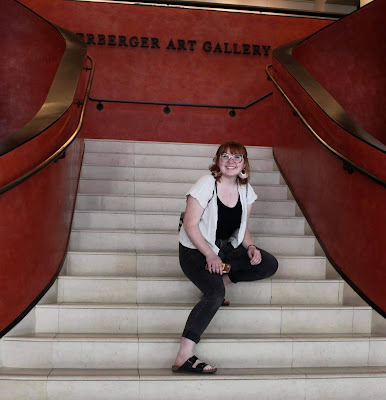 On Sunday our daughter, Phoebe will fly to Yale in Connecticut!! We are so proud of this kid 💕