Trying to recycle and art by my kids 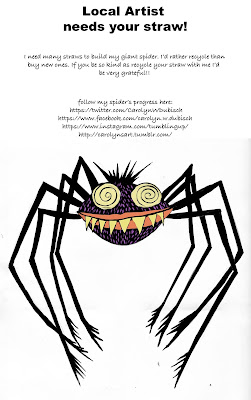 2 weeks ago I designed my giant spider for this year's "Mutant Piñata Show". I thought I'd use recycled straws for much of it and decided to collect them from local businesses. 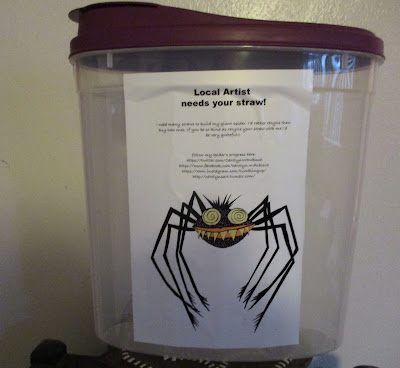 So I printed out these stickers and put them on containers to put by trash receptacles. I went to Starbucks, and they said no it doesn't work with their "visual", I went to Jersey Mikes and they said no, I went to Jamba Juice, and they said they'd "get back to me", and Dark Hall Coffee said the same thing. Now I'm rethinking this plan. It seems no one in Phoenix is interested in recycling. They took away our bins where we live. Then we brought our recyclables across the street to the other complex and now they've removed their recycle bin. Our friend uptown says he drives his recyclables to his mother's house! It's ridiculous!

This is a drawing Chloe did in her sketchbook while she was in Scotland last semester. She's back  at school in Missouri and completely swamped with school work right now.


This is another one from her Scotland sketchbook. I love her depiction of the crows.

Phoebe has also been busy sharing her work on her new art instagram  which is growing an incredible following rather quickly.

This is from her series of hand studies.

In other news, Forbidden Futures writer, Christine Morgan's story from issue one has been nominated for a Splatterpunk award. It's great that Mike's new magazine is already getting some notice!

I've started on a children's book about Oak Island for the Friends of Oak Island Society. It features many of the people from this TV show on The History Channel which is actually very challenging. Also everything I create is screened not just by an art director or an author but a whole committee of people. Anyway, we'll see how this goes. Have a great Wednesday!