I love kids. Anything at all can and does happen. - Dr. Ian Malcolm (Jurassic Park) 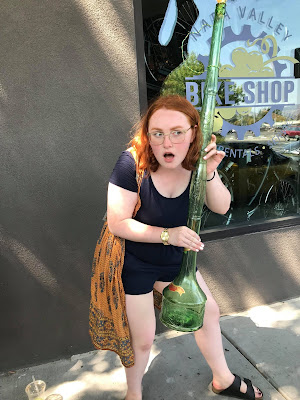 So here she is.... Phoebe! Busy running round Napa with her suite mates. She was competing in a scavenger hunt, where each team had to trade up from a penny to see what they could get. Her team ended with a giant wine bottle worth over $100. This was one of many orientation activities. She calls me and tells me so much that's going on in rapid succession that I almost can't keep up! 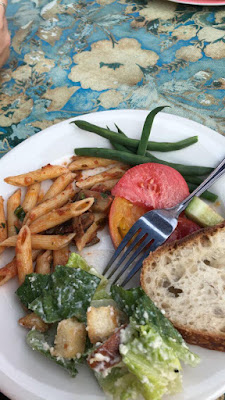 She's also sending me pictures like this of her lovely meals. These are NOT your average school lunches. It's a great place and she loves it, but still I miss her. 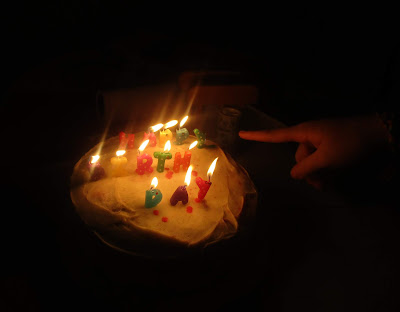 This week was Naomi's 15th birthday, which we wound up celebrating with just the three of us, since she kept changing her mind on what she wanted to do until the last minute. She made her own fabulous cake and we went to see a movie called "Eight Grade". An amazing movie that I'm not sure anyone with even low levels of social anxiety can handle watching. It was a bit painful for me.

Naomi is in 9th grade online again this term and is back on swim team this semester. Her coach likes and hates her. She's good, but has things to learn and for some reason this causes a rollercoaster of attitude from the coach. 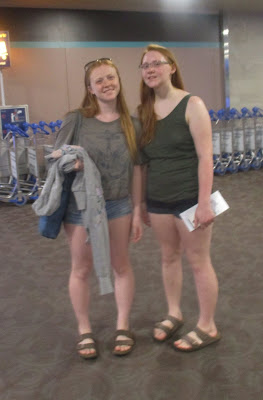 I picked up Chloe from the airport yesterday. She just flew in from Missouri and will be leaving for her semester abroad in Scotland on Monday!! She's quite excited. I took a picture, not because it's so uncommon to be at the airport, quite the opposite. This was the 6th airport run for us since we came back from Ireland (7 weeks ago). I think I'd go bonkers if the airport wasn't 12 minutes away!

Yesterday Mike went in for dental work, and because he said he had anxiety they gave him all the drugs. He was zonked all day and mostly slept after I picked him up. We're getting all our dental work done because Mike has been moved from his full time position at the Academy of Art University to part time and our dental will end at the end of September.

Because of this and many other things (like all these extra school expenses this semester), we're cancelling our plans to travel to Iceland for an art residency next summer. Even though we pay for these things with grants and things like my professional development fund from my employer, it still costs us in local travel, incidentals, and of course loss of income while we're away. Honestly I'm forever grateful that we had the opportunity to do the residencies we've done, so for now, Iceland will stay a dream. Have a magical weekend!