Off to Comic Con and moving my sculpture 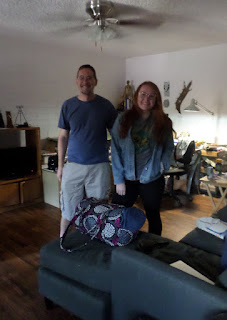 Earlier this week Mike and Phoebe left For Comic Con in San Diego. 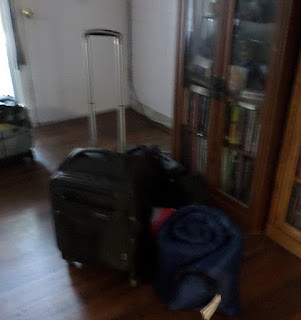 As I understand they've been enjoying the con, though Phoebe twisted her ankle the minute they arrived at the airbnb.

I've been home teaching art to elementary school kids. Last week I had a young student who was very upset by her drawing and I had to counsel her through class. She hated it, so I told her move on and do a new one, then she was concerned that her mother wouldn't let her go on the cruise because it was so bad. She cried and cried for 45 minutes. Finally class was over and she left.  Ten minutes later she came walking in to my next class (painting!). This week though she was in a great mood and was happy the whole time. At the end of class she started begging me, for her to give a speech.
"We don't really give speeches in art class. What is the speech about?"

"Shame."
"Ummmm.... Yeah, we're out time, class is over."
And then I patted her shoulder and told her to have fun on her cruise.

Meanwhile in Morocco my sculpture is getting relocated out of Green Olive Arts Arthouse. It's been moved to the Spanish School and will be on display indefinitely.

They have photographed the painting I did on the back wall and will be printing it on vinyl for the display. Hopefully soon I'll have photos of the new set up!

Anyway this week I received a big mask order for a film being shot in Luxembourg, and of course they need them shipped internationally by Monday for a Friday shoot, so shipping costs the same as if they bought me a round trip plane ticket.... Still waiting for the go ahead to ship. Not sure they're handling the sticker shock well.