Layover in Montreal and coming home 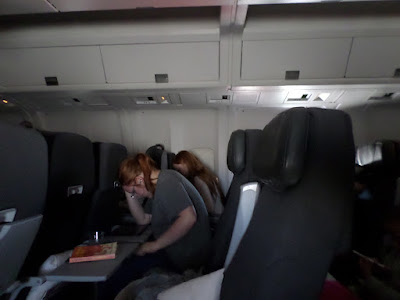 Our flight out of Casablanca was the emptiest plane I had ever been on. I can honestly say anyone who paid first class for that flight wasted a colossal amount of money. Anyone who wanted to, could have 2 to 3 seats to themselves. The flight attendants were having a lovely time, were in a great mood and all over us with extra drinks and anything we wanted. They even handed out the rental ipads free of charge. This is a photo of Naomi and Chloe watching movies on them. 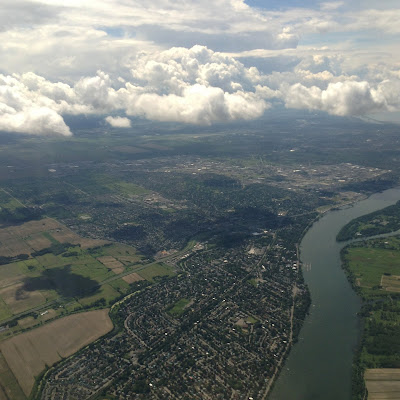 The flight went quickly for one all the way across the Atlantic, and before we knew it we were over Quebec. 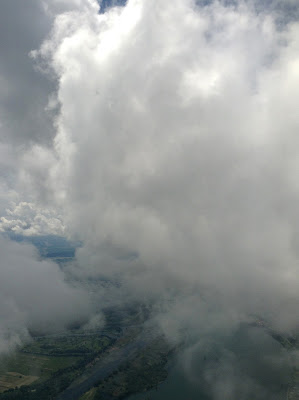 These are the amazing clouds we flew through on landing. 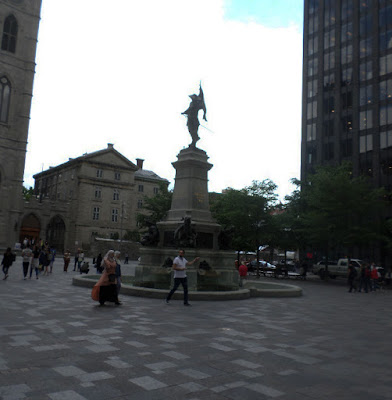 We had a 10 hour layover so we decided to go check out Montreal and have lunch while we waited for our night time flight. The taxi driver was like a tour guide and brought us to the best place he could think of, which was the old city in the downtown area. This is the first photo I took in Montreal and I think it's interesting that it has two women in headscarves right in the front. Coming from Casablanca I didn't even think twice about it then. 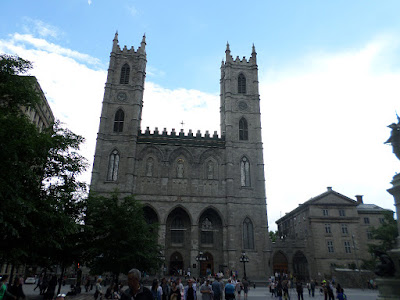 The taxi driver left us in front of this cathedral called Notre Dame Basilica. I'm sure he expected us to check it out, but we were hungry and there was a huge line with admission fees. 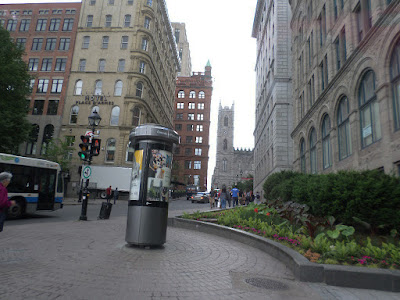 Being in Montreal after a month in Morocco was disorienting to say the least. It's a beautiful city, but we were a bit shell shocked standing on the corner, finally we chose a direction and walked. 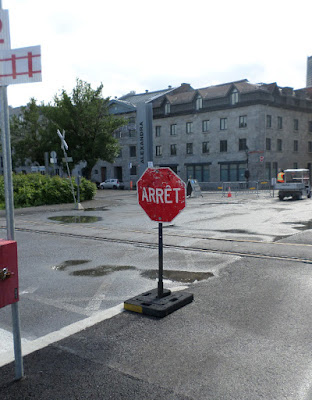 Everything was of course in French, which was sort of normal after Casablanca, but the climate was quite different. There was a cool breeze and the sun was shining. 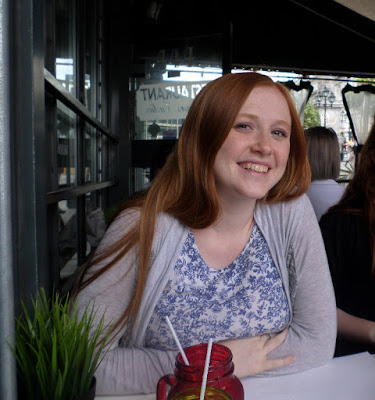 Near the port we found a restaurant that was full of tourists so we clamored inside with all our carry on bags that we were dragging with us. 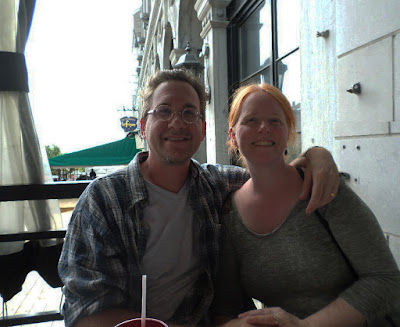 Mike and I at the restaurant. 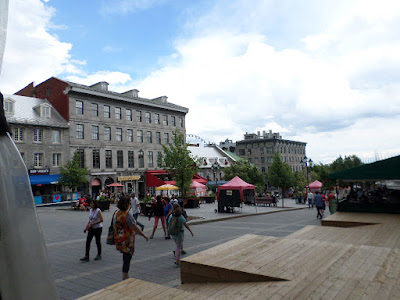 We sat admired this view and ate. Then the bill came and we were hit with another shock, we were now $90 Canadian dollars poorer. A month of a really excellent exchange rate was now most certainly over. 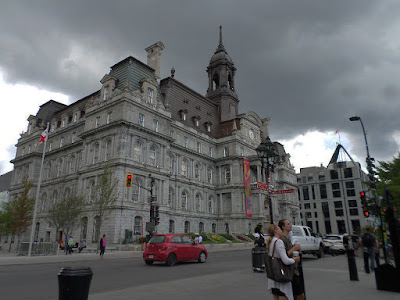 Just as we left the shelter of the restaurant, the weather dramatically changed. This storm rolled in and we were stuck on the street. 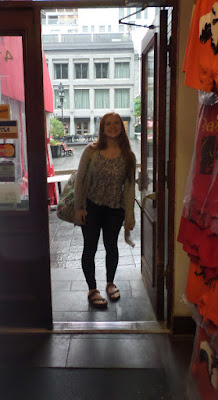 For a while as the rain poured down we hid in a souvenir shop. Then it became uncomfortable when I obviously didn't want to buy his $15 falling apart umbrellas. So we left and found ourselves in a coffee shop where we waited out the rain. Just as we were about to give up and get a cab back to the airport the storm blew out of town as suddenly as it blew in. 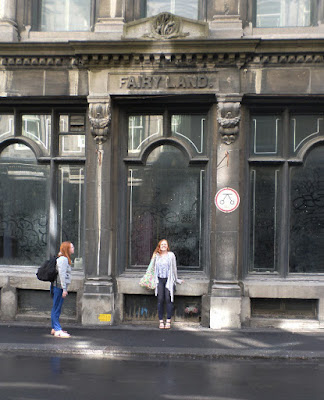 So we took another walk about. The girls found it amusing that this place called Fairyland was a dilapidated and abandoned mess. 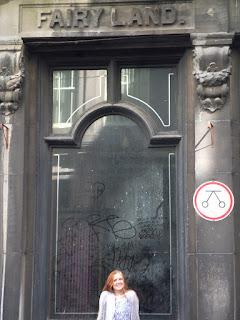 I kind of wonder what it used to be like. 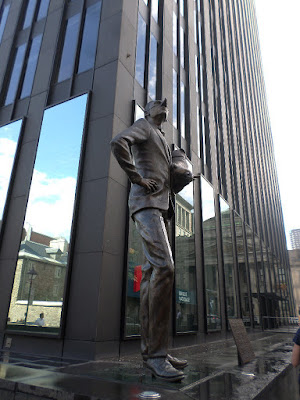 This is a statue of an Englishman. 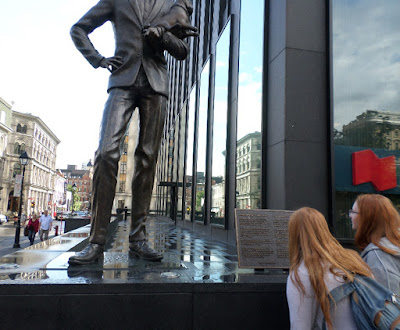 The girls are reading the plaque. It says that this is an Englishman snubbing his nose at the church (he's facing the church) which is an underlying part of the Québécouis society. He's also holding a pug that's trying to break free and run to the dog in the other statue's arms across the square.

This is the other statue of the Montreal native snubbing her nose at the English financial institution (she's facing a bank), and holding a poodle that's in love with the Englishman's pug. Also trying to break free of her arms. 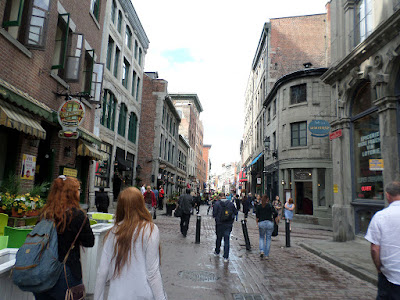 From here we walked around a bit more. 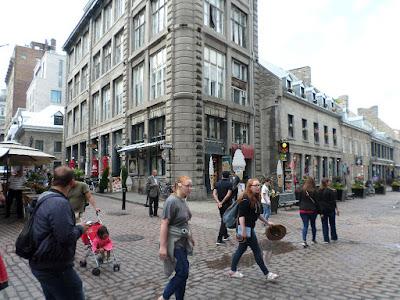 This is a pedestrian only area. 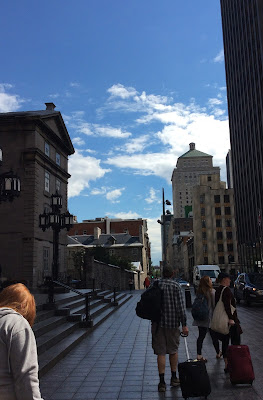 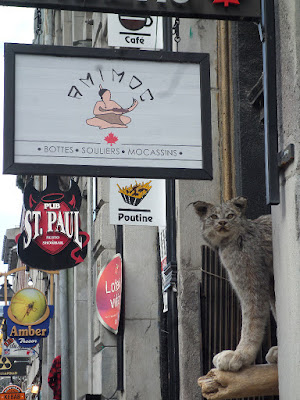 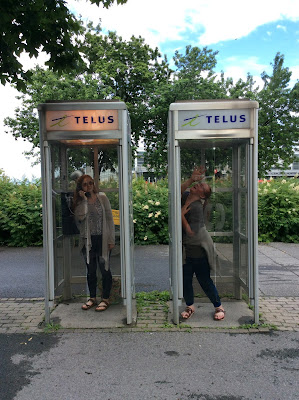 We actually found some phone booths. 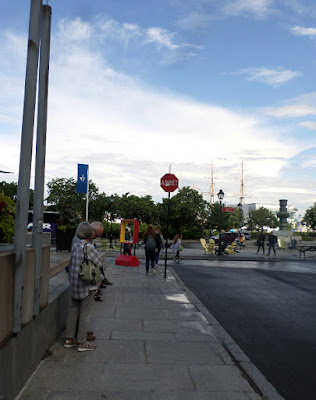 We decided to go check out the waterfront area again. 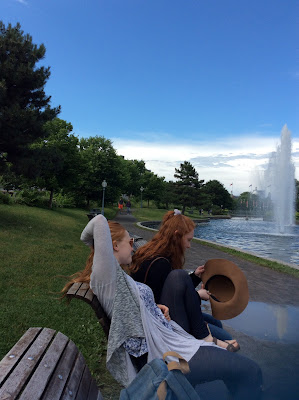 There we found a very nice park, with a fountain. 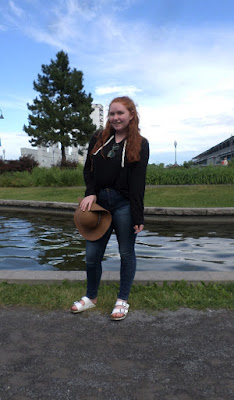 Phoebe actually agreed to pose for the camera. 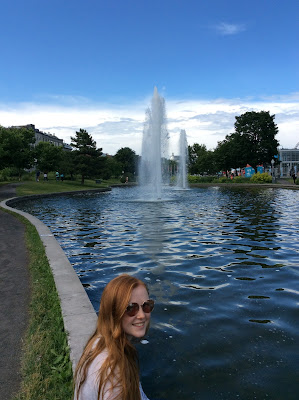 Chloe in the park. 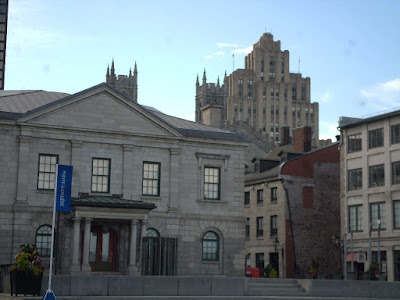 Soon enough our little visit to Montreal was over and we headed back to the airport where we eventually boarded our flight to Toronto. Toronto was another long overnight layover, so I had the foresight to book a hotel. We went get our luggage that night and it wasn't there, it was getting a more extended stay in Montreal. By the time we arrived in Toronto though we'd been awake for 22 hours and no longer cared about much of anything.

We came back 5 hours early for our fight the next day to see if we could track down our luggage. 3 bags arrived (2 still missing) while we waited in baggage claim, but then we REALLY had to check in for our flight to Phoenix. This was the most confusing and epic checkin of any airline flight I'd ever experienced. We were set to 2 different lines. Then Mike and the girls checked in, but my named was spelled wrong when they checked me in in Casablanca so I was sent to 3 more lines. Finally we made our flight (after Mike found a manager and flipped out on her).

Coming home was uneventful except that we were missing two of our oversized bags and Phoenix was having it's usual summer time temperatures. Late that night Mike picked up our dog who missed us desperately, but had a good time with other dogs at the petsitter's house.

Now we are back and Morocco seems almost like an amazing dream, but at least I wrote it all down!