When I said, 'Can my day get any worse?' it was a rhetorical question not a challenge.

We woke up to rain, an odd occurrence here in Phoenix, and even though I rushed her, Naomi was late. Again.  As I walked home with the dog I stepped in one of those puddles that looks an inch deep and then you're up to your knees.  So I walked home slowly with one drenched, cold foot in a squishing sneaker. Then the craziest thing happened as I came around the corner with Oscar. There was a woman (maybe 30yrs old) with 2 huge dogs, that immediately got very excited upon seeing my dog. They starting pulling her about so I pulled Oscar back. Suddenly they were dragging her on her stomach. "Oh my god! I'm so sorry!" is all I remember saying as I pulled Oscar out of sight and behind a wall so they couldn't see him. I just hoped she was able to get to her feet and get control.

The afternoon wasn't much better. After picking up the kids from school I found our COX bill in the mailbox. We had cancelled our cable last month in order to save the extra $60 they were charging for it, and this month instead of being $60 less it was over $500 more! I didn't have time to deal with it though as I needed to get Naomi to the eye doctor.  She failed the eye screening at school, twice, so I decided to get her checked.  Two and a half hours later and $54 poorer I learned that she has 20/20 vision!

Oh well, that was yesterday.  Today is is a new day, and a better one.  Mike's been hired to teach for The Academy of Art in San Francisco.  It's online, so there's no commute!  Also both Mike and I will have our art on TV! The TNT show, "Perception", is setting up a fake comic con for a scene in their next season and they needed art to fill the different booths with.  I'm hoping I'll be played by Kate Winslet.

Now here's some gratuitous pictures of my cat, sleeping on a giant bear... 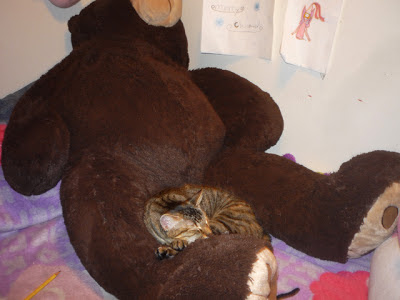 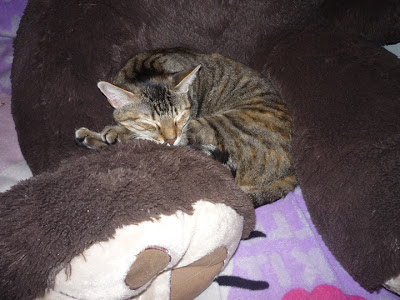 Have an excellent weekend!