So in addition to a million other things (like driving my kids around and such) I was doing this on Monday...

Red River Radio presents "Art of The Red River" Your window into the world of art. Artists, Wade Zahares, Mike Dubisch, and Carolyn Watson-Dubisch interview sculptors and artists from all walks of life. 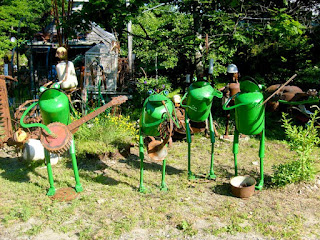 Our first guest is sculptor Nathan Nicholls.A welder/sculptor of recycled/found metal objects. His current passion is transforming his yard into an extensive sculpture park where people can come and meditate or simply enjoy the view. He has works on display at his home gallery in Waldoboro, Maine, at many area galleries and businesses. His sculptures are on extended exhibit at the Liberty tool museum in Liberty, Maine and Hulls cove in Bar Harbor, Maine. His work also has shown at the Penobscot Marine museum in Belfast Maine and he has sold works to many people far and near.

After Nathan will be cartoonist and animator Mike Bocianowski.His work has shown in the Untied States and Poland and he's the creator of the popular comic series "Chuck The Ugly American".  His latest comic book series "Yets!" is also proving to be just as engaging. He's taught animation at the Edinboro University and was the featured artist on a PBS show called "Egg". We're thrilled to have this diverse and creative cartoonist and animator join us today. 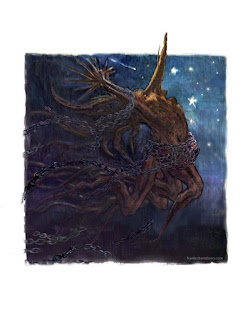 Our final guest is Frank Dixon. Frank Dixon studied art and illustration at Art Center College of Design and received his MFA in fine arts from California State University at Los Angeles. His background ranges from portrait artist on the Queen Mary, to award winning graphic designer/ illustrator for NASA, to a popular art instructor in Southern California. Many of his treetch paintings and writings are featured in his three books: Drawing Treetch and other Fantastic Creatures, The Struggles of A Treetch, and The Art of Frank Robert Dixon . He lives with his wife and two children in a land of rolling hills and rather large trees in southern California.
Email Post
Labels: Art Art of the Red River Frank Dixon Mike Bocianowski Mike Dubisch Nathan Nicholls radio-show sculpture Wade Zahares