Today was "Free Coffee Day" at Starbucks, if you are just reading this right now and thinking "Ugh! I missed it!".... GO! Go! It's going on all day.  Anyway, like most people, I just happen to live within walking distance to at least five Starbucks, so this morning we headed off for our first coffee walk.  It went quite well, in that they gave us coffee.  As we sat outside sipping away I spied an abandoned purse near another table.  No one was around so I grabbed it (being someone who has lost their purse many times), and proceeded to look for ID.  I found the woman's cell phone and just as I started calling a contact in her phone that shared her last name Mike spotted her.  She was a very nice elderly woman who insisted repeatedly on giving me money.  So our first coffee outing resulted in a cash reward!

Our second coffee outing came after lunch.  This time we brought Phoebe and Chloe who ordered frozen smoothies, courtesy of the purse incident.  Don't despair though, the second outing was no less exciting for when I went to use the unisex bathroom I boldly walked in on a man peeing.  Who doesn't believe in locking the door of a public restroom?  I'm beginning to think a third outing may be more than I can handle, as I'm pretty hopped up on the coffee I've already consumed and who knows what's behind door number three!

Last weekend we saw "Wicked".  IT. WAS.  SPECTACULAR. 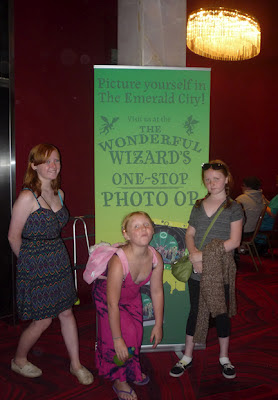 Here are the three girls before the show.  Naomi is a bit wired and goofy (Can you tell?) 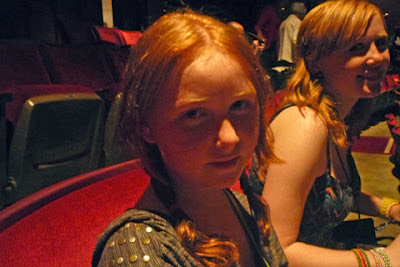 Phoebe before the curtain went up.  She was fighting a fever that day, but wasn't going to miss this! 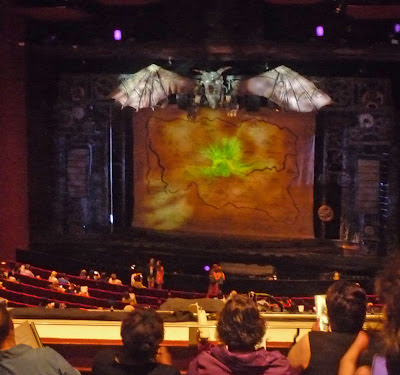 This is the stage as the audience filed in.  The animatronic dragon along with all of the sets was something to behold.  I was riveted throughout this show, and our seats in the mezzanine were fantastic!

In other news we have received a visitor from Finland... 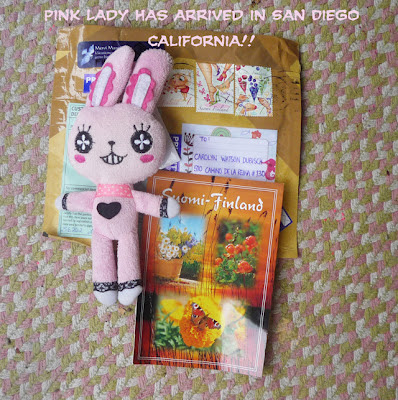 "Pink Lady" is a Toy Voyager. These little toys travel the world and she will be joining us on our journey across the continent  while we update her blog.  We've hosted toy voyagers before and thought this would be fun for our travels.

We also went to my friend Kelly Clark Moncure's photo exhibit up in Carlsbad. 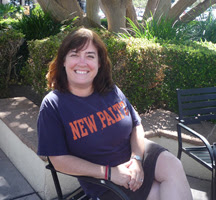 This is Kelly outside the cafe.

Her work is worth your time if you're in the Carlsbad area.  I reviewed her show here for the Examiner. Anyway I hope everyone here in the States is enjoying their explosives and grilled meat.