So for a little variety I decided to try one of these blog prompts I see on different sites. Anyway I'd say it had mixed results. Not so bad that I won't post it here, but not so great that I'll keep doing it....

"If you could travel through time to an era from before you were born, what single event would you most like to attend?"

Of course the problem is that attending historical events while saying you were there would be amazing, it could also be quite dangerous. Historic events are often married to tragedy, and war. Even ones that aren't have an incredible sadness to them.  Like if I were to say the launching of  The Titanic for example. While I wouldn't be in any immediate danger, could I simply sit near a pier waving at all the cheering, excited but doomed people on board, while they sail off to their destiny?    Would I want to be there the day they chopped off Marie Antoinette's head?  The only historical event that I can think of would be when Apollo 11 landed on the moon.  Perhaps if I could stowaway on board and watch Neil Armstrong's first incredible steps.... Yes! I thought of one!!


The girls had their opening night in "Once Upon A Mattress". Unfortunately it was cold and raining (nothing terrifies the locals more in San Diego) so it wasn't all that crowded, and minutes before the show
Naomi burned her hand on a curling iron, but she was a trooper.

Saturday night though, was packed and they had to open extra sections! The crowd was great and laughed in all the right places.... 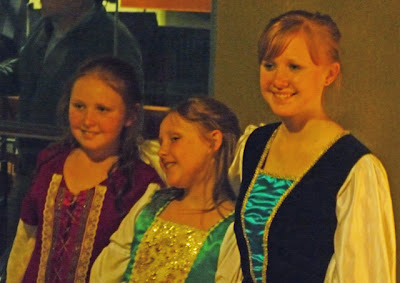 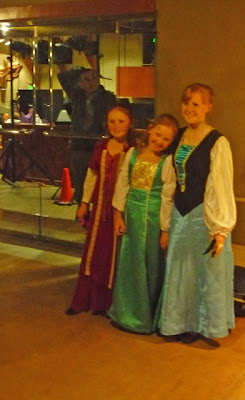 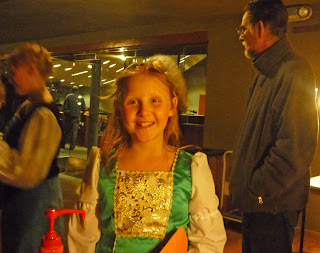 Naomi by the concession stand! She's so excited.  The kids love performing. The best part is they get to do it again next weekend!!