Here in Southern California we're starting to get the haze that fills the sky in May and turns into "June Gloom".  We're approaching 2 years since we stepped off the plane from South America into LAX in Los Angeles. I remember feeling stricken when I looked at the sky then and saw the haze.  We'd traveled from crystal clear skies of the Andes Mountains to the smog of L.A. 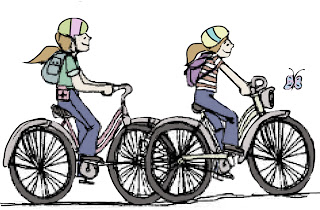 Last weekend Phoebe and Naomi took their very first bicycle training lesson.  It was also their last, as after an hour and a half they were both tooling around the parking lot on two wheels like they'd been biking for years.  Especially Phoebe, who was having a blast.  Naomi still has some trouble starting but can bike well once she's going. Their instructor usually works with nervous adults and was amazed by how fast and fearlessly the girls learned to ride.
Next Monday is my 40th birthday, and I'm really pissed off about it.  I was hoping I'd feel better about it but it turns out I'm not....Oh well.  At least we're celebrating by heading up to Universal Studios, Hollywood, this Saturday!!! THAT I'm excited about.
Feliz cinco de mayo a todos, and Happy Mothers Day to all the moms out there!
Email Post
Labels: 40th Birthday bike lessons biking June Gloom Universal Studios