This week my two youngest are attending Musicpalooza Camp up at "The Museum of Making Music". It's actually a Girl Scout camp and they're having a blast. Chloe went to theater camp a couple weeks ago so she's not too jealous. We're scrambling to get ready for the U. S. Open sandcastle competition this week, as it's on Sunday. 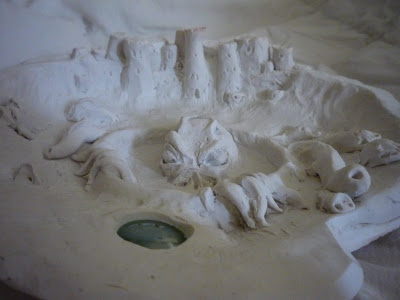 This is our preliminary clay sculpture of "Menace From The Deep" (yes-it's a commentary on the oil leak).

Hopefully we can get our team together to do a practice, otherwise I guess we'll wing it!

I was going through some old photos to post on Facebook when I realized these are a blog post desperately waiting to happen, so I'm breaking my rule about not posting old pictures. The idea was that my blog should be current about things going on now.Turns out that I should stop making up crazy rules about what to write... :P

This is Phoebe, back in 2005, by one of the giant heads at the OMI Sculpture Garden in upstate New York. 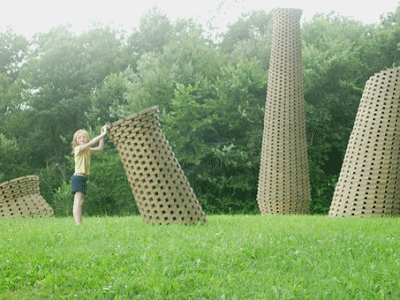 By the giant twine...

I'm pretty sure it's in Dutchess county, if you're in the area it's a great day trip. There's no admission, and there are acres of sculptures to explore, including a bridge that plays "Over the Rainbow". There are also a couple picnic tables if you bring your own lunch. There was a petting zoo and apple orchard nearby as well. We stopped in for some amazing apple cider doughnuts, and as usual I was injured in the petting zoo. Free Parenting tip: Don't get stuck holding the animal food in the petting zoo! Better yet don't buy any! Let them feed their own stupid animals!