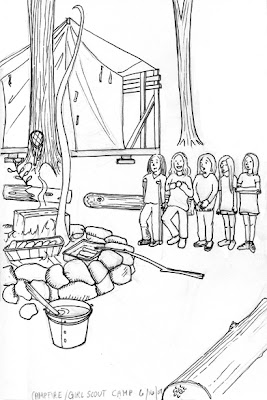 A week and a half ago, I found a brownie troop for Phoebe (my 5 year old) to join. Two days later they asked me if she wanted to join them on the camping trip that all the girl scouts in Greenville attend. So after a mad rush with paper work and mailing forms, off we went last weekend up to Lake George. I had to go as well, because of her age. My oldest, Chloe, was already scheduled to attend with her troop and was not exactly thrilled that her little sister and her mom were coming along.
I did this drawing by the campfire on Saturday. In the fire is two pans with burritos that were being heating up for dinner and inside the box they were somehow baking cookies. Despite the unsteady cot, the latrines and the serious shortage of available coffee, it was nice spending time with Phoebe.

This week we finally got our passports in the mail (all but Mike's). The passport photos look just as bad as when we sent them in. It's strange we all looked pretty good that day, and every photo came out lousy except Phoebe's. My theory is they want the photo to look like you will after getting off a long international flight. It must be something about that camera.
Email Post
Labels: camping Girl Scouts passports