The weekend was actually pretty hectic with last minute mask orders to fill, edits on the children's book I just finished and Mike and Phoebe running over to Phoenix Fan Fusion (what they call Phoenix Comic Con now that they lost a lawsuit). Naomi was off at a coding convention with her boyfriend as well, and Chloe was about with her good friend Katie (the only one of her friends that came home for the summer).


Monday came around and Mike and I packed and got ready all day for our flight at midnight. Finally the time came and we hugged the girls farewell and went to check in at the airport. As I waited in line Mike rushed off to the bathroom when a person from the airline appeared and told us all that our flight was cancelled. The crowd became hostile in an instant. Yelling at the women, demanding money and a new flight. Mike returned and I told him about the cancellation and when we walked up to the counter . Mike was smiling and relaxed and said "Isn't there anything you can do? Surely there must be something"

While people in other lines were being told they couldn't leave till Thursday or they could get an $86 voucher, we were booked for a trip leaving the very next day. While it was admittedly a crazy journey from Phoenix to Denver to Miami and finally to Mexico City, it was great that we would only miss one day of our travels and spent an extra one with Chloe who was still home for a while. 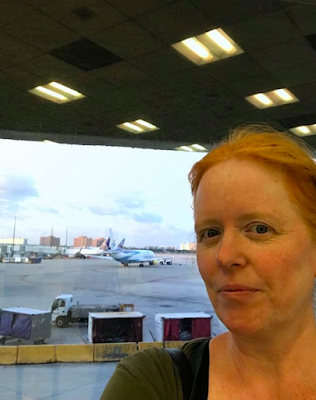 This is me at dawn in Miami Dade International airport, where they were clearly trying to set a world record for the most refrigerated airport. We had an epic layover here and had to step outside over and over to warm up in the humid, tropical pickup area. 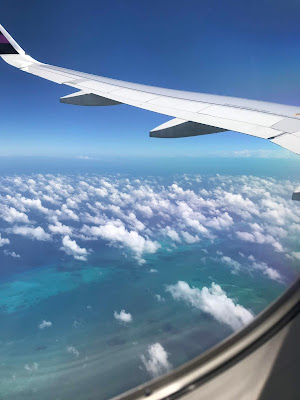 The view as we flew over the Gulf of Mexico on our Mexico City flight.
This flight was so empty people were lying down each in their own row! I love empty flights (it hardly ever happens!).

Travel is never easy and usually I'm just waiting for something to go wrong, and this trip lived up to my expectations. Upon arriving we knew we wanted to uber from the airport. We called one as soon as we found out how to get away from the taxis, but we were still either ripped off or our driver was a bit dim. Anyway he changed our destination, we wound up in the wrong place and charged us for a new ride from there. In all it cost about $20 USD for a ride from the airport instead of about $12 USD. In the end it really was the extra 35 minutes in the car that annoyed me, but we are here.

Let me tell you, so far this city is world class. One of the most incredible places I have been and it's only been 24 hours.💕
Email Post
Labels: airline travel Art cancelled flight CDMX Mexico City stranded in Miami
Location: Mexico City, CDMX, Mexico