Things like Chloe coming home from college. (YAY! She's done with 2 years of college). She's also a straight A student, and since she goes to school out of state it's nice when she comes home.

Phoebe is still busy with her activism. She went to a protest called "The Poor Person's Campaign". It wasn't a huge march, but it was a call for a moral revival in American politics and this country.

Anyway, everywhere the group marched they were followed by the police department's new camera that has facial recognition software. 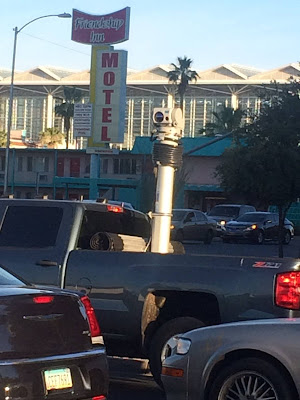 So that's the wave of the future. If you watch enough "Black Mirror" this can keep you up at night.

Since school is out and the kids are "around" we all went out last weekend to see the new Star Wars movie "Solo". Honestly we all had a really great time. It's strange that I heard some people are boycotting this movie, because they were unhappy with choices the director made in the last Star Wars movie.  It was really a lot of fun to see!

Anyway I'm working on masks for a show in London right now and some orders to Australia. In fact only one mask I'm making is for a client in the US. Maybe I could successfully relocate my mask shop outside of the country. It looks very promising in fact. Hmmmmmm......