For quite some time now Phoebe has been busy working backstage doing makeup and pushing around sets on a local production of "The Secret Garden"at Valley Youth Theater.  Just this weekend the show has finally opened, so Naomi and I went together on Sunday to check it out. 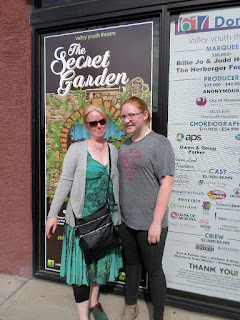 The theater was packed with little girls in pretty dresses. We had pretty good seats though. 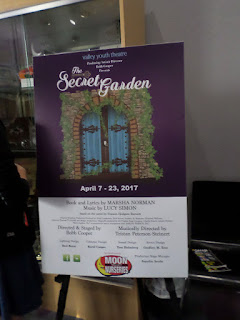 This production was the musical one. There is also a play version that I worked on a few years ago. I was curious to see how they were different. 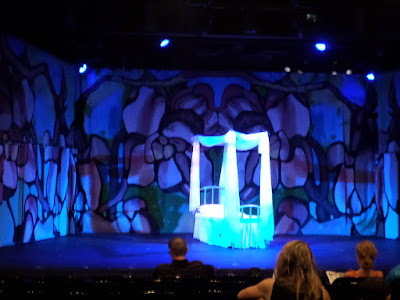 This is the opening set, after this no pictures allowed, but it opened with an incredible scene of all the people dying of cholera, and introduces all the ghosts that haunt the main characters throughout the musical.  I should say it was astonishing how completely different the musical version was.

First of all there was not just a few songs, they were singing throughout. In fact there was hardly any speaking. They had ghost characters everywhere, acting out scenes from the past intermingled with the present. In the play the dead characters are referred to, but they are dead and not in the show. It created such a spooky and haunting atmosphere.

In the play there are SO many animal characters and there were literally none in this production. It was amazing to see how the same story, and source material was a charming little play full of animals in one show, and spooky gothic opera in another. Not to say we didn't enjoy it, we did. The cast was amazing, and I loved the sets! Phoebe's clearly having a great time being part of it.

Anyway this week I'm swamped again with work making masks for a show in Austria and a film in NY.  Today I'm bringing Naomi in for her typhoid vaccine for our trip to Morocco which is getting closer every day. Happy Monday!