The past week was a busy one that began with civil war night at the Middle school. 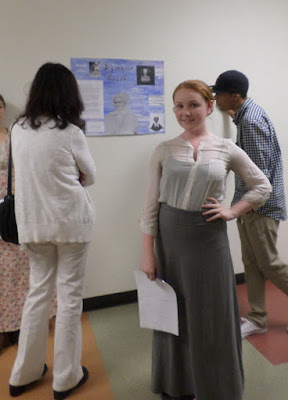 Phoebe presented about Sojourner Truth,a slave woman and inspirational speaker (later in life). She did a fabulous job! 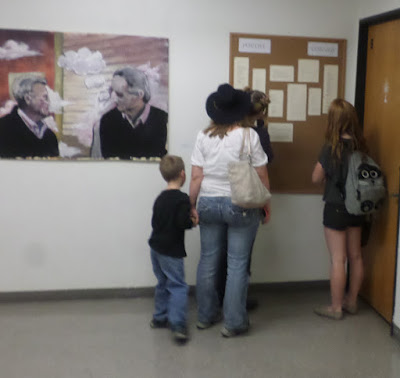 Chloe's school participates in the city wide First Friday event every month and this month she had one of her poems on display. 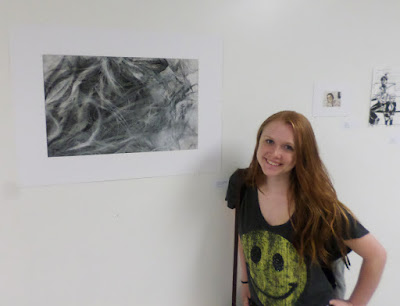 One of her drawings was also selected. 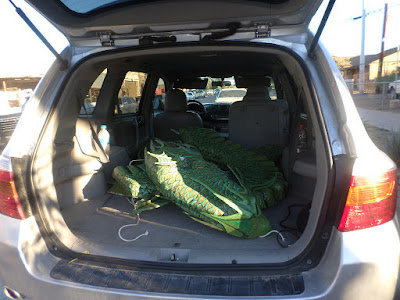 Saturday morning began at the crack of dawn with Mike and I driving over to Grand Avenue to hang my Sea Monster for the Festival. 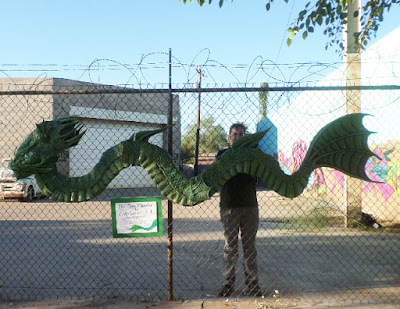 Here's Mike busy tying him to his fence. 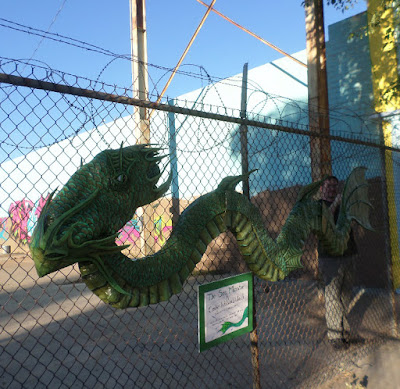 The location behind the fence has a mural in progress that was getting completed during the festival. 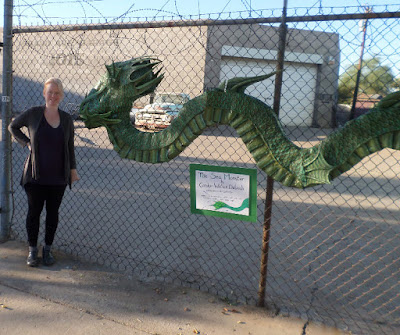 Me with the Sea Monster. 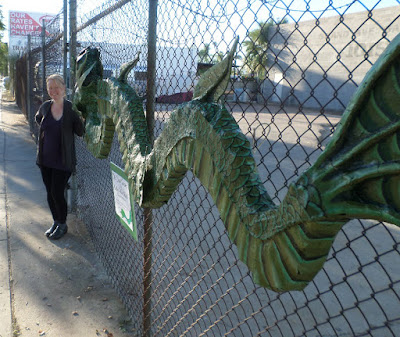 After this I had to rush off and teach 2 art classes in Scottsdale. 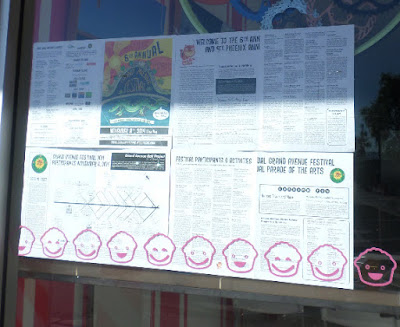 Walking around Grand Avenue you could find the article about the festival posted in the windows.  The colorful page is the poster I designed. 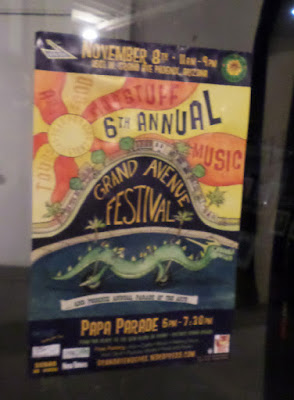 The poster itself was of course in many windows as well. 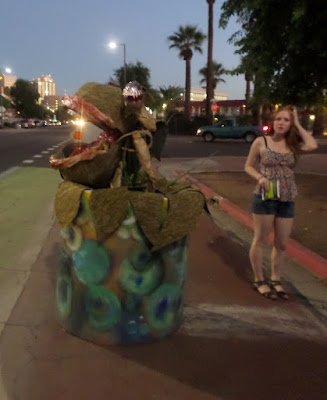 We returned that evening for the parade (except for Naomi who went to a birthday party where she was the only guest that showed up). This is Audrey 2 (the plant from Little Shop of Horrors) decorating the sidewalk. 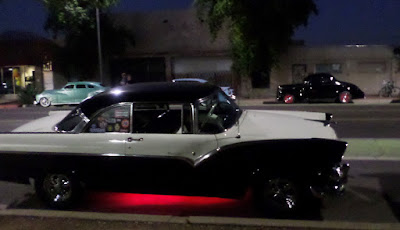 There were many classic cars-This one had a glowing bottom. 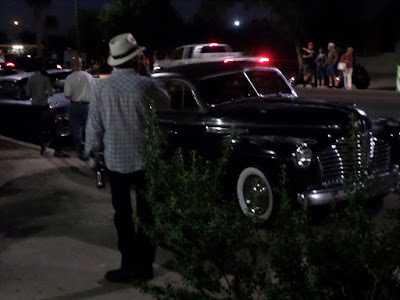 Waiting for the parade. 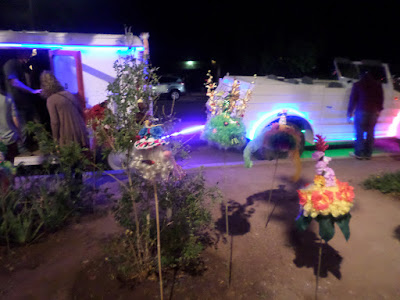 This is the "Wig garden" by Beatrice Moore. 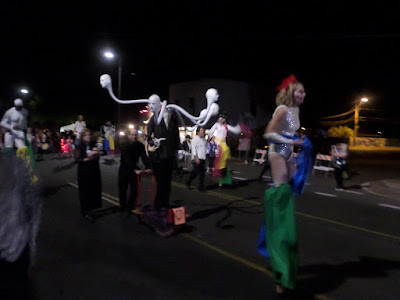 This is one of the stilt walkers and a man with many heads walking past in the PAPA parade. 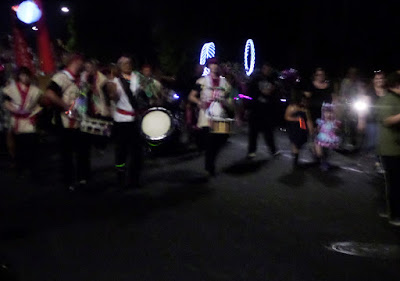 A slightly blurry picture of the drummers and the girls with glowing hoops. 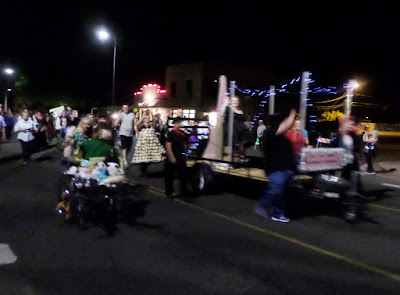 Ok-most of my pictures of the parade are blurry.... My camera hates the night. ☹ 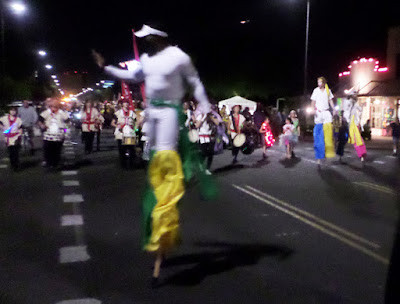 This one is better... I think. 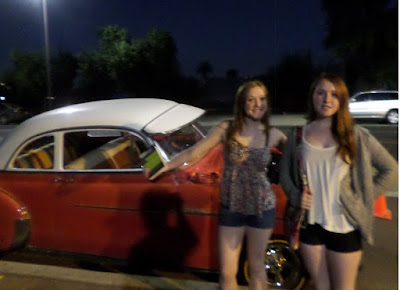 Anyway here's Chloe and Phoebe by a classic car.  As they walked through the festival they were stopped by a man who asked them if they were twins, and if they were over 18, because he had a modeling job for them.  They got a great life experience in avoiding weirdos. 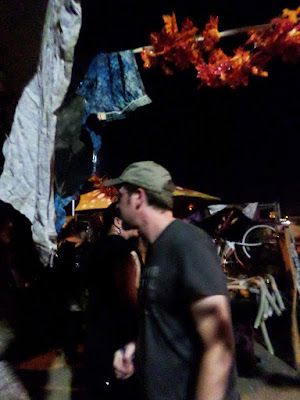 This is Mike walking through the Goblin Market at the end of the street.  Unfortunately my camera really, really hates night time.  So this is the only picture that's even visible.  Oh well.  It was a much bigger festival this year and we had quite a nice night out!
Email Post
Labels: Art Civil War First Friday Grand Ave. Festival PAPA parade parade school sculpture Sea Monster