Last weekend was 17 years since the day Mike and I stood in my grandfather's rose garden in the harbor village of Northport, NY and got married.  Since our plans last year dissolved in a confusion of poor planning and overwhelming obligations we went a bit overboard this year.   We started off Saturday by driving up to Hollywood and using our passes to Universal Studios (as a Southern California resident the annual pass is about the same as a single day's visit).  Here we are waiting in line... 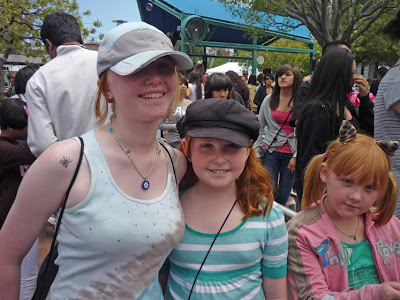 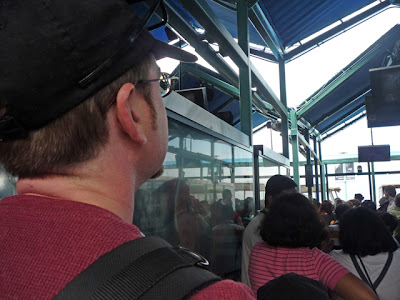 The line was for the studio tour and while it was massive, it moved briskly. 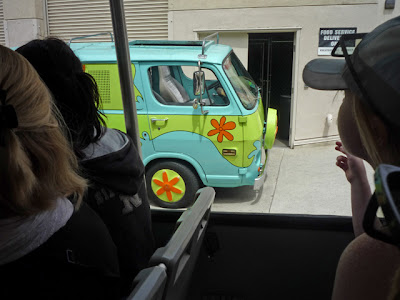 Once aboard the tram we headed to the Universal Studios front lots.  The Scooby Gang's Mystery Machine was parked outside of one of the warehouse like buildings.

However the front lots were dull, even though we knew they were filming inside.  It wasn't till we reached the back lots that the tour became interesting.

The buildings on the left are not real.  They are sets and have been in many films and TV shows.  On the right the tram is entering "Skull Island" from King Kong. Which was an incredible 3-D experience, and made the huge wait in line almost worth it! 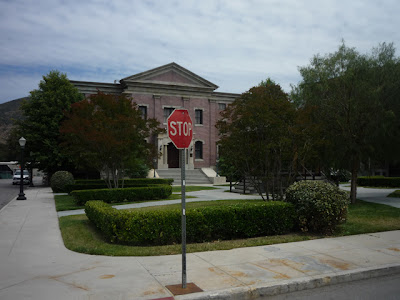 This set was used in the "Back to The Future" movies.  They removed the clock tower to use it in a different film. 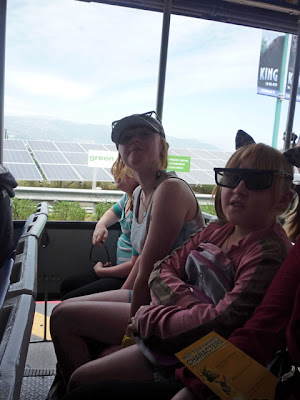 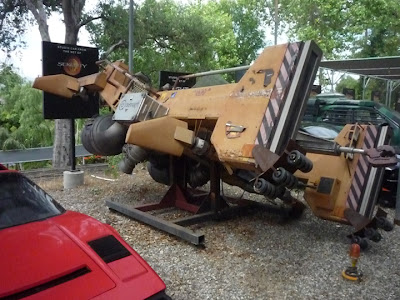 We tooled past some famous cars.  This ship was from "Serenity", which was interesting, but not nearly as exciting as the next cars we saw....

These were stunt cars that came roaring towards the tram and stopped in midair!

We drove through "Wisteria Lane" from "Desperate Housewives" and saw that one house had a film crew inside and a very bored security guard posted outside as we passed. 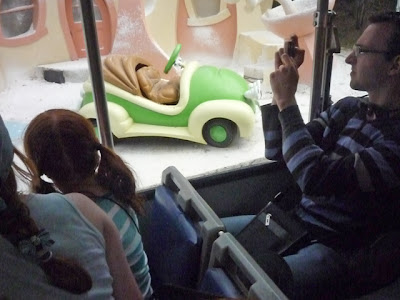 Then we came to "Whoville" from "The Grinch" movie.  This was fascinating for me as I just spent 3 months building and painting sets for "Seussical". 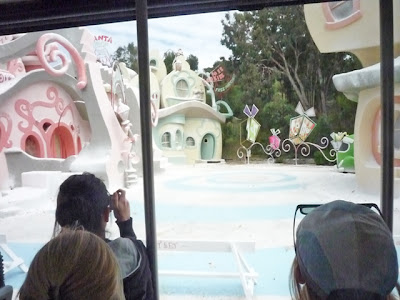 It was amazing to see "Whoville" in  real life!

Oddly enough they built Whoville behind "The Bates Motel" from the "Psycho" movies. 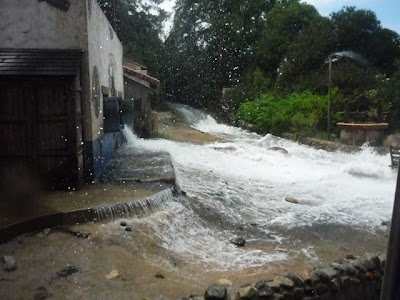 The tram brought us to this Mexican village, where they demonstrated weather effects and flooding.

The set of "Jaws" where they startled us with a jumping shark. 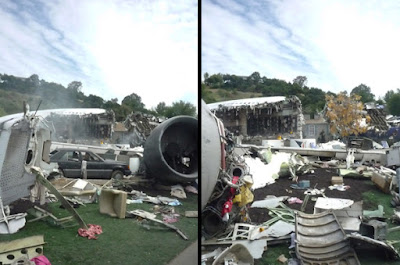 And then of course, there was my favorite set, perhaps because we've seen this movie so many times. 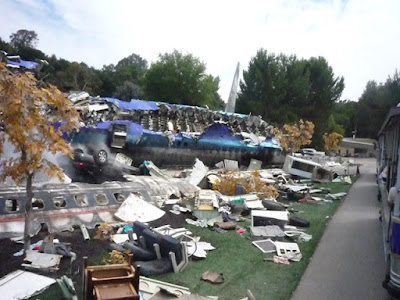 This is the plane crash set from "War of The Worlds". 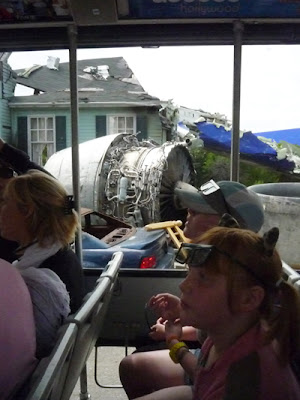 Much of this movie was filmed (and took place) near where we used to live in the Hudson River Valley in New York. 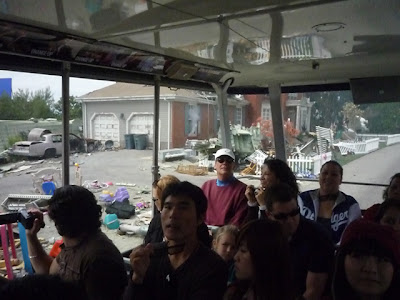 In fact several people from Greenville (the town we lived in just a few years ago when I started this blog), were extras in this film. 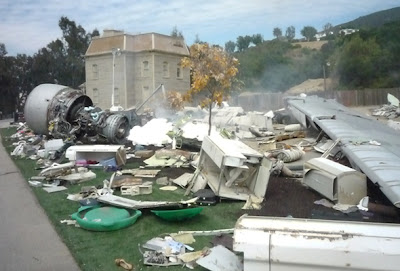 They stood for hours shivering in the rain being filmed. Nearby Tom Cruise walked about with another man, who followed him closely with an umbrella, obviously assigned the task of keeping Tom Cruise dry.  It turned out to be a great movie, and this scene with the plane has always stayed with me. 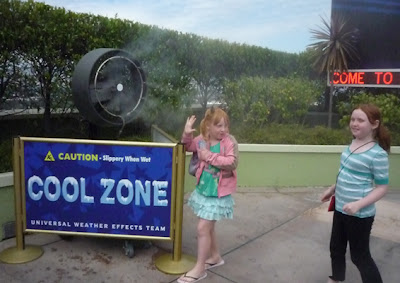 After the tour the kids cooled off before dinner. 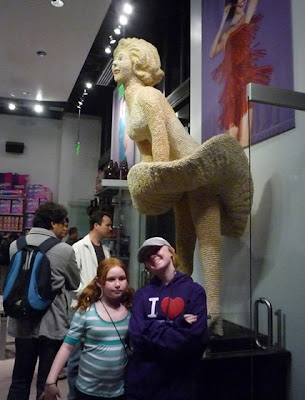 After dinner we stopped in the candy shop to see this Marilyn Monroe, made of thousands of jellybeans. 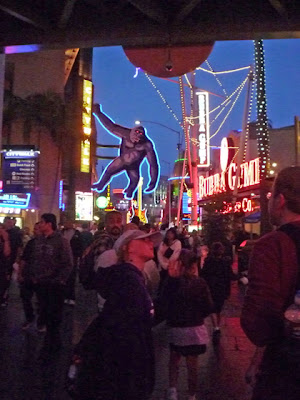 ...And ended the evening with a stroll through "city walk". 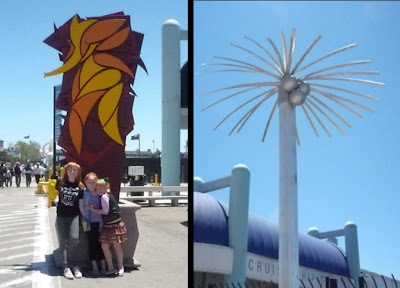 The next day we headed downtown to take the ferry to Coronado.  While we waited for the boat we checked out the 2011 Urban Trees exhibit on the waterfront (I wrote about the 2009 exhibit here). 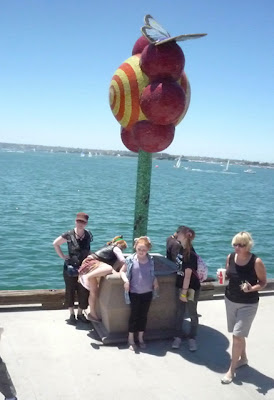 I'm not sure what Naomi had in mind climbing up on there. 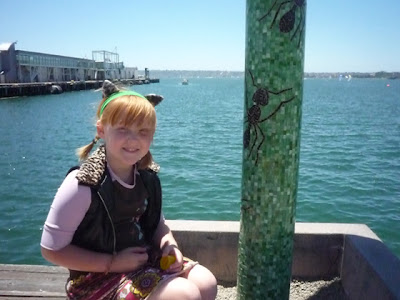 I guess it was just a good spot to sit!

The time came to board the boat.

It's a great trip through the harbor.

The kids made friends with other children on board in the fifteen minutes or so it takes to get there! 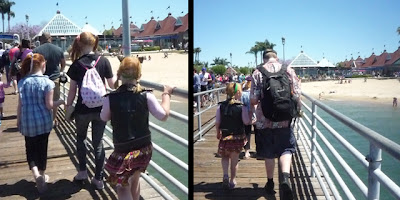 We arrived to a huge crowd.... I guess everyone thought it was a good day to head to Coronado! 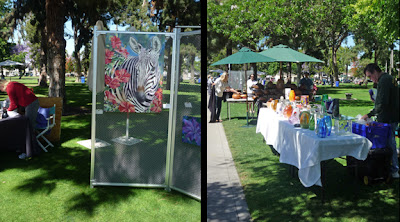 But our destination was the Art in the Park exhibit , not the beach.  In the end it was great anniversary, and a great weekend, even though we all got sunburned.  :)
Email Post
Labels: anniversary Art in The Park boat Coronado Dr Seuss Hollywood sets Universal Studios Urban Trees War of The Worlds Whoville

Shabby Chic Boho said…
Looks like a lot of fun, we are going to US in July, Fla.