By plane or by car? 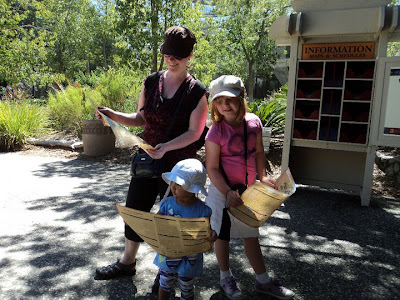 Last week my good friend, Victoria, brought Naomi and I to the San Diego Wild Animal Park (well, that's what I call it, they've changed the name to safari park or something that I can't remember). Here I am with the kids puzzling over the map. Despite the heat we had a really nice time exploring the park.

My friend was excited, but agitated most of the day as she'd just booked a flight to visit a friend this summer.  Unfortunately she's terrified of flying, but not as terrified as her friend is, so she's the one braving the trip.  I tried to console her with the same old adages about how it's safer than driving to the supermarket.  I don't think it helped very much.

As if on cue to back up my claims our other good friends here in San Diego were in a collision just a couple days later.  Their car was hit by a young woman who plowed through the red light as she texted on her cell phone.  Their car was totaled and two out of three of them left the scene in an ambulance.  We went to visit them on Saturday and they will be okay after they have some time to heal.

So, I concluded, flying is the safe way to travel- right?  Perhaps, or perhaps you should consider this anecdote that was recently shared with me...

I couldn't find my luggage at the airport baggage area. So I went to the lost luggage office and told the woman there that my bags never showed up. She smiled and told me not to worry because they were trained professionals, and I was in good hands. "Now," she asked me, "Has your plane arrived yet?"
In conclusion idiots are everywhere.  The End.
Email Post
Labels: car driving plane San Diego Safari Park travel

Anonymous said…
I hope your pal had a safe, assuring flight...apprehension pangs trigger thoughts of pessimism at times, when courage sneaks low...But, I hope know she's capable of even flying on her own without any fear..wish those in the hospital have recuperated by now too..tc..have fun as always!
June 28, 2011 at 12:27 PM

Confabulicious.com said…
I love the wild animal park. I hope you are having fun exploring all that California has to offer. Eat it up while you are here. We just found out we are moving out of state, so I am trying to do all my bucket list activities a few more times like Huntington Gardens in Pasadena, Lake Arrowhead, Hearst Castle...

The list is too long and the fun never ends here. Plus, with the state being broke, who knows, they might start shutting these places down.