Friends and fans in the final days....

Well, we're in the last few days of Small Press Idol 2010 and "The People That Melt in The Rain" is still in third place, barely. This crazy contest has been quite a learning experience for us as we plea for votes each day and struggle to bring our work up to a higher standard. The contest itself has had it's share of drama like any good reality show. There's been accusations of cheating, spying and sneaking around, but also we've made some great friends, and acquired an incredible respect for our peers and the mad struggle to get noticed in this industry. I really look forward to meeting them in person. I have some art to share by members of other teams, created in honor of "The People That Melt in The Rain". 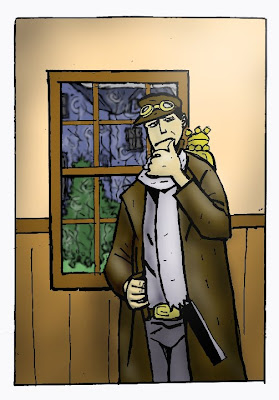 This is our character "Jason Waterman", by artist Danny Kelly, and colored by Cynthia Moyer. He's the artist on"The Curse of The Vessel", which is a powerhouse promoter in the contest, but more importantly a really good project worth taking a look at.

This was created to spoof us early on. Created by artist Dan Burke. Artist of the very funny comic "The B Team".  He's had a tough time this round, but his comic made me laugh, which is a lot harder than you'd believe. I took a comedy writing class in college, and let's just say it's been blocked out of my memory to keep me from hiding under the bed for the rest of my life.

Carolyn Watson-Dubisch said…
We finished in fourth place right now, but they are screening the votes to see which are legit and adding in the judges votes. It's been an eternal week of waiting... :(
June 15, 2010 at 10:59 AM