"The Happiest Place On Earth"

On Monday morning we kept the kids home from school and at the crack of dawn zipped up to Anaheim, California for our big Disneyland day! I know many people have been to Disney, but this is our first trip and I just have so many photos to share. Hopefully this will bring back some memories! Getting my kids to bed the night before was worse than Christmas Eve, but the next morning they were up and running, ready to go.

Here we are on Main Street waiting for the park to open. We set up a tight schedule through "RideMax" so we could avoid the lines. It worked like a charm except for the racing about to grab "fastpasses".

We rushed in with the crowd and headed to Fantasyland.

This is the witch from "Snow White". She peeks in and out of the castle window. 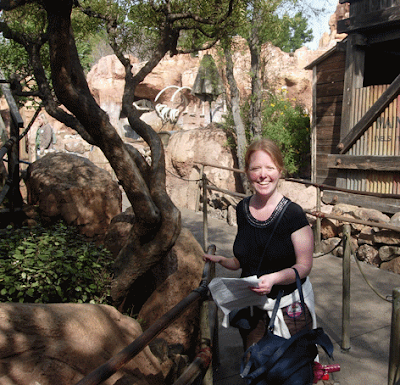 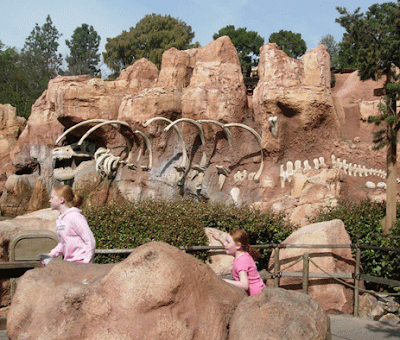 After a 5 minute wait we're all aboard. 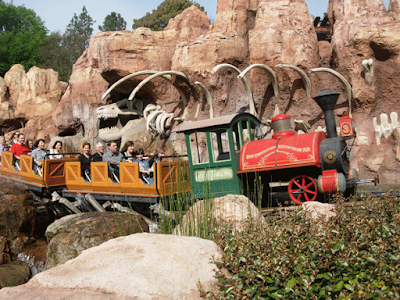 The Tiki Room was our next stop. It was full of singing animatronic birds, which was a little odd and long but the end was great with the rain pounding on the windows and the totem poles singing... 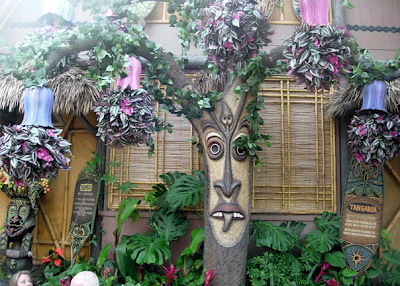 Here's Naomi worshiping a totem, and Phoebe by the fountain. 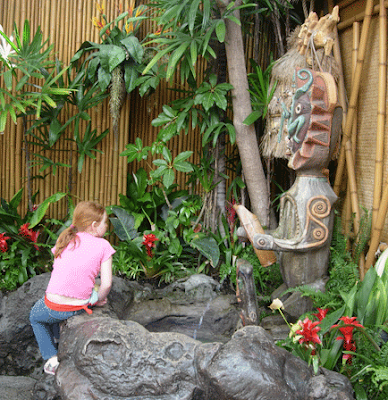 We climbed up into Tarzan's Treehouse...

...and discovered the Jaguar that wrecked the lives of all the main characters of the movie.

This is the entrance to The Haunted Mansion, which was an amazing attraction. Only Disney can do a haunted house with really impressive ghosts that aren't particularly scary. 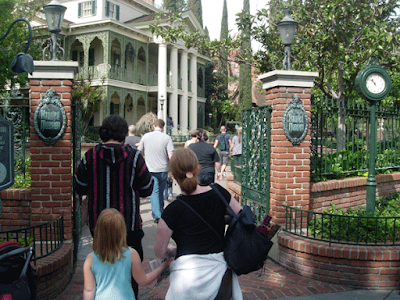 Here we are by the White Rabbit from "Alice in Wonderland".

Unfortunately we missed the "Alice in Wonderland" ride, but it gives us something to do next time!

In the afternoon we brought the kids to the "Jedi in Training" Show.

All three girls were chosen from the audience to enter "Padwan training".

After learning some moves with a light saber...

Darth Vader and "friends" emerged from under the stage!

Naomi ran away, but Chloe put up a fight.

Then Phoebe gave it a shot. After chasing off the bad guys they all recieved awards for their efforts!

One of our favorite areas was "Mickey's Toontown" ...

It was like walking around inside "The Roger Rabbit" movie.

During the day we walked past "It's a Small World"again and again.

This has to be the most parodied theme park ride of all time.

Finally we decided we had to try it. I'm so glad we did! The wait was about 7 minutes and then we were surrounded by beautiful singing puppets and moving sets. It was an astonishing experience, though it's been several days, that song is still going around and around in my head .... Perhaps there was some brainwashing after all...

Last week Mike and I entered our comic "The People That Melt in The Rain" into a contest called "Small Press Idol".
Our entry was posted the day after we got back and all three judges gave us a "yes" to move on to Round 2! Now we need the public to vote for us to get through the next round. It starts March 22nd and to vote you need to sign up for the website. If we win they'll publish the series and make a toy of one of the characters!! I'll keep everyone updated as to when you can start voting, but for now signing up for the site makes you eligible!
Email Post
Labels: Disney Disneyland mickey mouse Small Press Idol Small World Star Wars The People that Melt in The Rain

The Travel Mom said…
Hey! It's Debbie. Just wanted to say hi and hope that you keep up with this blog! It would be great to share all the wonderful adventures you have with your family..xoxox
March 3, 2010 at 5:35 PM