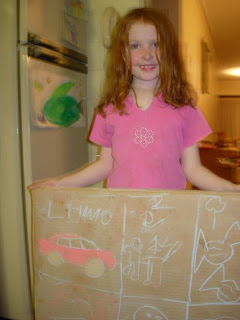 I met a ghost hunter once. At the Saratoga Springs mall, of course. He sat in the bookstore wearing a plaid cap and had a neatly trimmed white beard. He was signing his new book, The Ghosts of the Hudson Valley.
Being a resident of the Hudson Valley (at the time), a fan of the supernatural, and a fellow author, the man was like a living magnet for me. My kids were crying, my in-laws wanted to leave, but I was going to talk to this guy.
He told me of electrified fields, of visiting sites that were totally unremarkable, until he returned with his psychic. Then the place would instantly become repulsive and would make him feel so sick he had to run out. He said his work was dangerous and every day felt lucky to be alive. While he spoke to me, Phoebe came running over with tears in her eyes. He looked at her and said, "She's a scorpio isn't she?" Inwardly I groaned, while I find ghosts fascinating, I find astrology annoying. Reluctantly I said, "Well, yes."
"Poor girl. She has very vivid dreams. They're probably very scary at this age."
I was surprised, Phoebe was having nightmares and kept coming into bed with us at night. I bought his book, but that didn't really help Phoebe.
It's three and a half years later and Phoebe still has nightmares. She can't stand movies with scary parts (much to the chagrin of Mike, me and Chloe- who love a good scare). Taking a Benedryl before bed only seemed to make it worse and now she won't take one even when she really needs it for her soap allergy. Last March we bought her a dream catcher at the Artisan's Market. It's really a beautiful one with a large shiny stone in the center. We polish it each night before bed and she took it with her on the bus to Buenos Aires. She hooked it to the luggage rack over head where it swung wildly for the entire 20 hours of the journey.
The dream catcher helped for a while, but the nightmares continue. This week I started a dream diary with her. She told me her dreams. There were aliens, paintings in a museum that oozed a gooey liquid filling the room she was in, and one about the president blowing up the world( I'm hoping that one's not a premonition). Usually everyone died except her or she would die. We rewrote them and gave them better endings. Then she drew pictures. So far this is working really well, though any advice would be welcome.
This coming weekend she goes camping with her school. This is a big step for her, to sleep away from home on her own. I'd better pack her dream catcher though.
Email Post
Labels: Argentina dream diary dreamcatcher ghost hunter Hudson Valley New York nightmares