Yes, we did go to President Trump's rally in Phoenix

Well, we were actually outside of it, marching for unity, and speaking out against his recent comments encouraging the white nationalists. 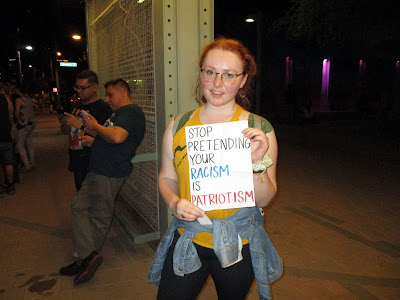 Phoebe really wanted us to march with the church, so we followed the directions, leaving cell phones at home and scrawling a contact phone # on our body with a sharpie, in case something bad happened. 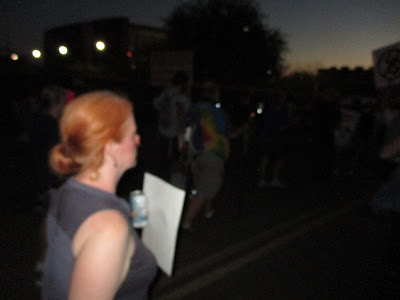 Streets were blocked off for a mile around the convention center, so we parked near an affiliated church and joined the candle lit march from the downtown area to the rally. 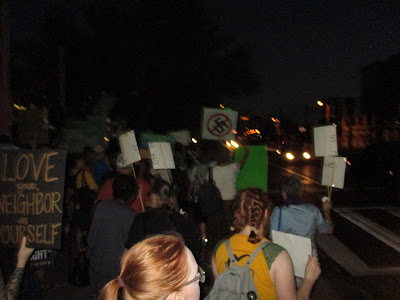 As we marched down Central Ave. chanting "Love not hate makes America great", cars drove by honking and cheering us along. The crowd was full of children,  and families, as well as older elderly people who were doing really well walking in the 105º degree heat (yes, it's still really hot here at night). 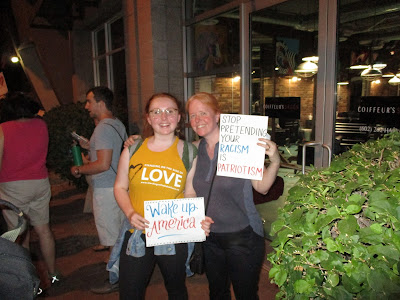 Phoebe and I with our signs. 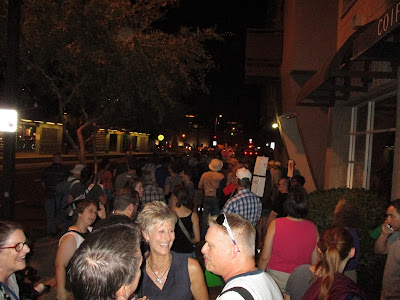 Our group waiting for permission from the police to cross. We were guided by police all the way downtown. 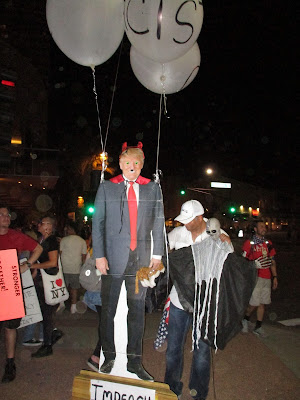 When we finally reached the convention center the crowd was huge, but I was so hot and Naomi was starving as she skipped dinner, so we popped into a Mexican restaurant for a quick bite and to cool down, before going back over. While Naomi ate we watched the big TV's in the restaurant in shock as the police outside started gassing the crowd. From outside we could hear loud popping and banging. When we got back out the tear gas hit our eyes and went into our lungs. Dazed we passed a man with tearing, puffy eyes talking on a cell phone. He looked at us smiling and said "Just embrace it!"

We walked back to the light rail with choppers circling and announcing that anyone in the street will be arrested. Gas and smoke bombs were still going off and the popping noises were terrifying. 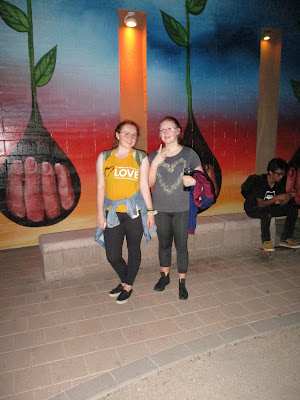 Phoebe and Naomi near a mural by the train. 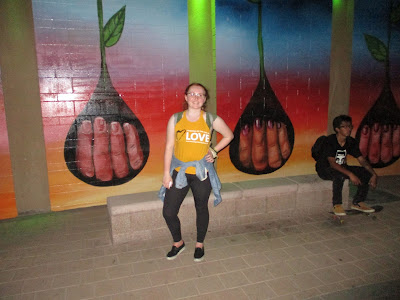 Phoebe posing by the mural.


While we waited for the train, I saw an old friend obviously coming back from the march. She was utterly traumatized. She was in the front next to the barrier holding her sign, and the crowd was chanting "Peaceful protest" facing a line of police with automatic weapons and a lot of well armed Trump supporters. Then someone from  the  group of thousands of protesters threw an empty water bottle towards the police. A moment later she was surrounded with gas and smoke, she and the people around her couldn't breathe. Some people were having what seemed like asthma attacks. There were noise makers the police set off that sounded like gun fire all around her and she ran to the closest open business, which happened to be a Hooters. The restaurant however, barred the door and wouldn't let anyone in, even though people were having serious asthma attacks. Many people were inside smiling and filming them in their distress. She was so upset, it sounded terrible, and I couldn't help but worry about all the children I saw in our march down. 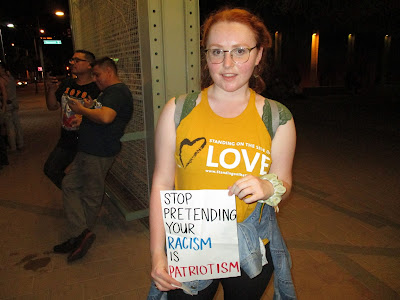 So then we came home, and washed off the tear gas, and felt glad that Naomi skipped dinner that night and detoured us at the last minute.