For the long weekend we took a long drive... to Texas. We're spending this holiday weekend in El Paso. After quite the journey on Friday we arrived here at this little house we've rented... 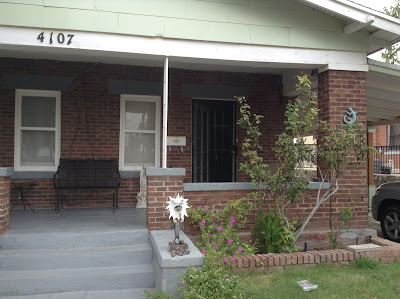 The kids sprung to action after the epic ride and quickly decided on rooms. 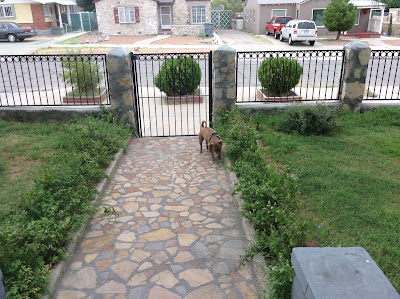 Oscar took to sniffing around the front yard. 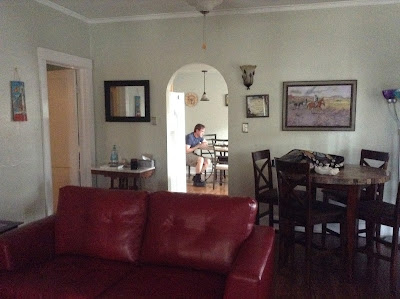 Anyway we all settled in nicely. 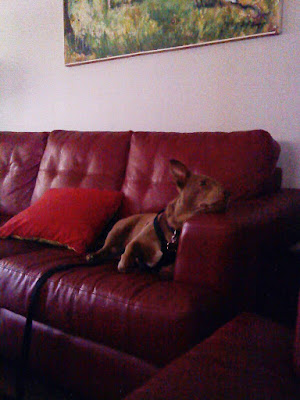 The little neighborhood is very pretty as well... 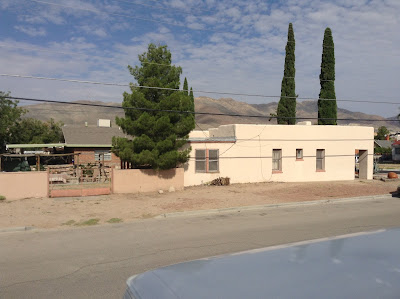 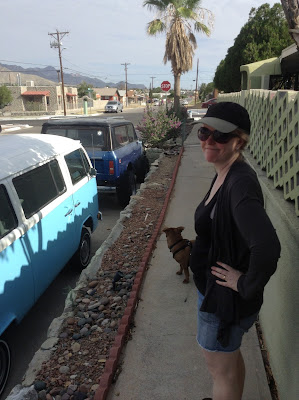 For our first morning after working very hard to wake up the girls we headed over to the Farmers Market for breakfast in Union Plaza.... 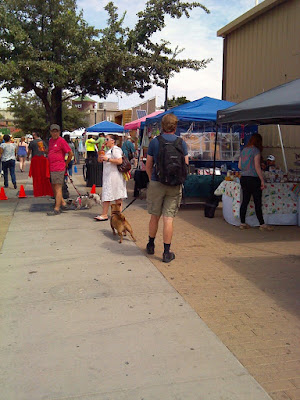 Union Plaza was pretty hot and sunny, we were wishing it was more like Friday when we drove down in the drizzling rain. 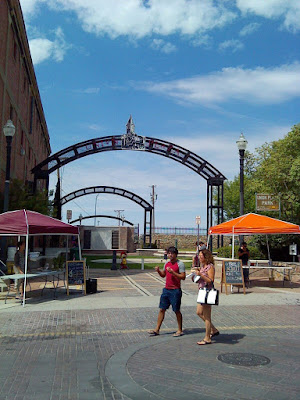 This woman was selling some interesting skeleton puppets... 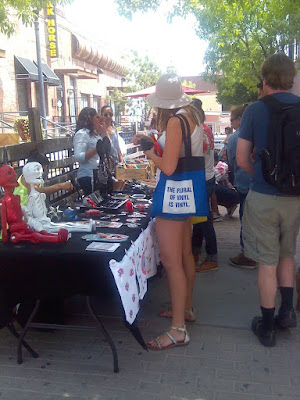 After a bit we found the food trucks and managed to eat some breakfast empanadas and some smoothies. From here we headed over to the International bridge to go into Ciudad Juarez. 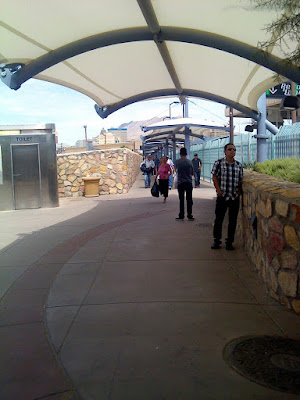 At the entrance to the International bridge. 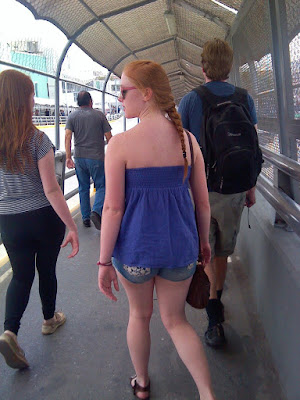 Crossing over the river into Mexico. 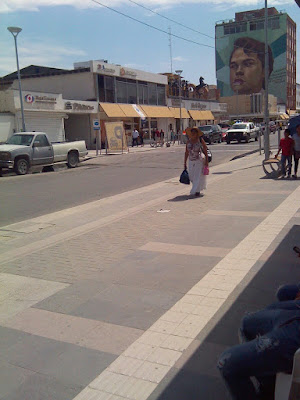 Juárez is a very big city compared to El Paso, but has the gritty feeling of many Mexican border towns. About five years ago it was one of the most dangerous places in Mexico, but the violence has dropped off significantly and they are trying to woo Americans back to visit. 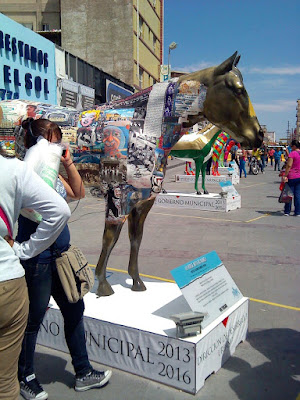 When we got to 16 de Septiembre street where most of the crowds were there was a huge display of wonderful painted horses by various artists. 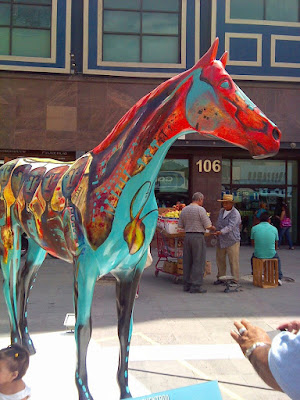 This one has four men painted on the side. 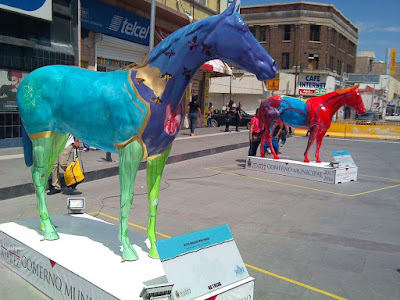 A beautiful one with birds taking flight. (In fact so many were so amazing you'll have to bear with me while I post as many as I can!) 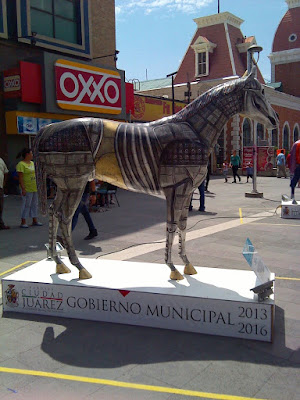 This guy was painted with a metal armature.... Robot horse! 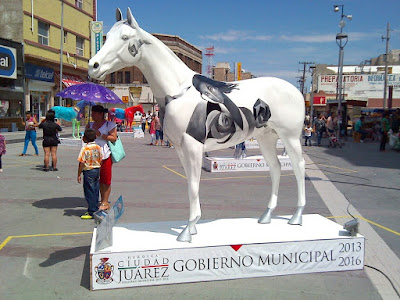 A black and white beauty with a woman's portrait! 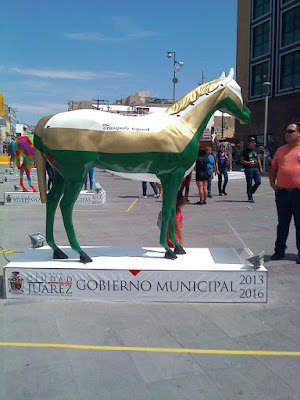 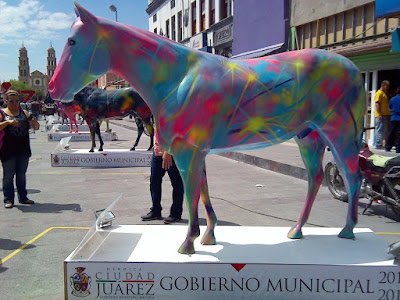 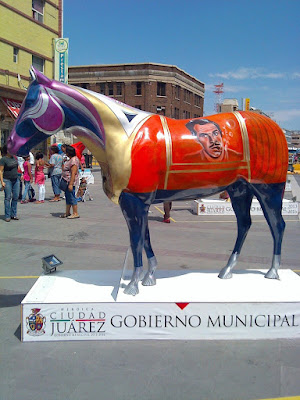 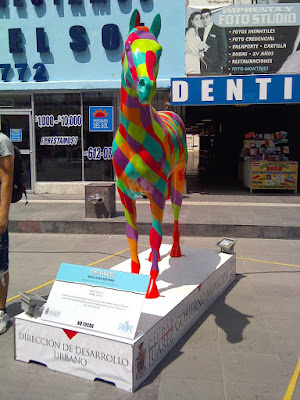 And one of my favorites. Unfortunately this exhibit was in the direct sun so we headed from here back into the crowed sidewalk of the marketplace, where Mike managed to find a hat to buy. 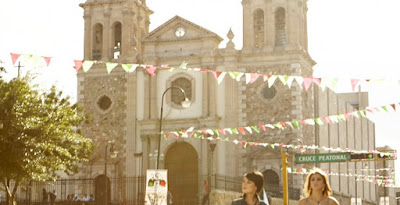 Our chosen destination was the Mission of Guadalupe. Since I didn't know what it looked like we wound up going to the cathedral next to it (oh well). 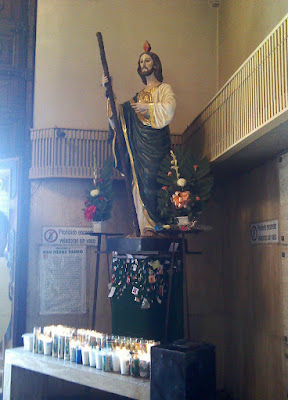 This is the Jesus in the entrance. It was right about here that Mike thought his ipad was stolen. He'd taken it out to photograph horses and suddenly couldn't find it! 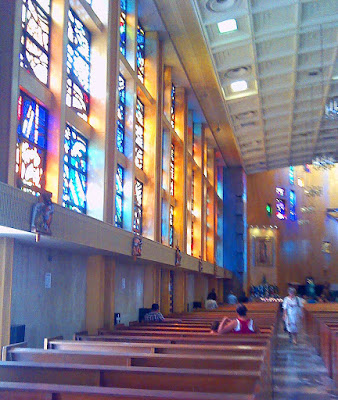 There was about 10 minutes of serious panic, and then there it was in another pocket. After this we started our trek back. As we walked we shopped a bit for ice pops and a ring for Naomi. We had many leftover pesos from our last trip to Mexico and were looking to spend them. One woman was selling something Mike wanted though and refused to take pesos. She only wanted American dollars and wouldn't budge about it!

As we got to the bridge to go back over the river we scrounged for quarters to plug into the turn style to walk across. The Mexican customs official thought we were quite hilarious as we held up the line looking for change. 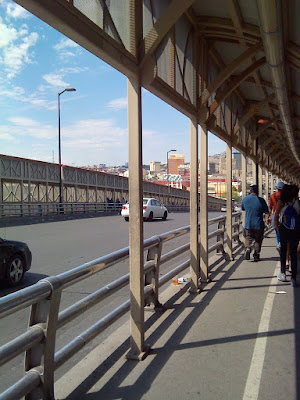 As we walked back I came to an alarming realization, I gathered our passports and discovered I'd dropped Oscar's international health certificate somewhere on the streets of Juárez!! I was in a blind panic as we got in line at customs. Mike was too. The customs official didn't even ask about the dog, though and I breezed through the passport check with another official laughing at us. I put my bag through the scanner and there we were... back in Texas!

Today is a new day in El Paso, though I think this house we've rented may be haunted... All the dresser drawers were empty when we woke up this morning, and our clothes were on the floor!