Last week was "pleasantly warm" and if you read my blog before then you know that's what we call weather in the 90º 's here in Phoenix. 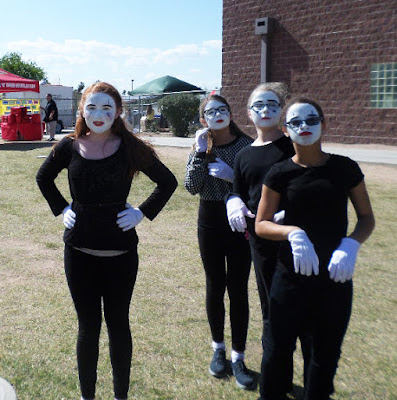 In the beginning  of our pleasantly warm week was "The Madison Bash".  A district wide arts celebration at Phoebe's middle school where she performed as a mime with other members of her theater group.

On Tuesday I taught my art classes out in Scottsdale. One class is outside on the patio with many hot and sweaty 4 and 5 year olds.  The great thing about young children is that a hot day never effects their enthusiasm!

Thursday was a downer.  Mike flew to Portland, Oregon for the HP Lovecraft film fest, where he promoted many publications and was a featured artist, and our pleasantly warm turned to hot when we hit 100ºF. By Saturday though the weather cooled down again and a comfortable breeze blew across the valley.  Which was really, really good, because on Saturday morning I was scheduled for another chalk festival, this time in Glendale. 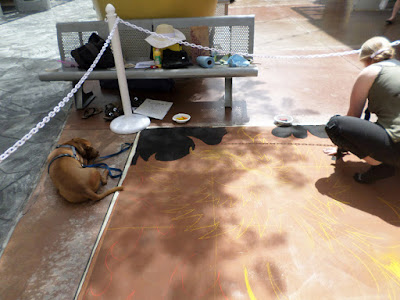 Since Mike was out of town, everyone came with me, including the dog. Everyone wanted to pet him, which was fine at first but then he'd start to feel shy and come sit next to me, walking across the mural on the way.... I wound up cleaning up dog prints at least 5 times. 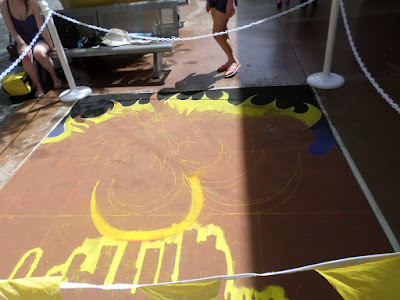 Unfortunately, the morning sun was right on us (Phoebe was my designated assistant this time).  I got the sketch down and had only just started with black and yellow, when we took a break for lunch. I decided to see if our shade would get better before continuing.  Of course drawing with black is really filthy work.  I cleaned up as best as I could, but I was not quite ready to dine in the fancy sushi bar my kids picked out for lunch.  After sushi I sent my other 2 kids to the movies and Phoebe and I got to work.  We had plenty of shade now and it went pretty fast. 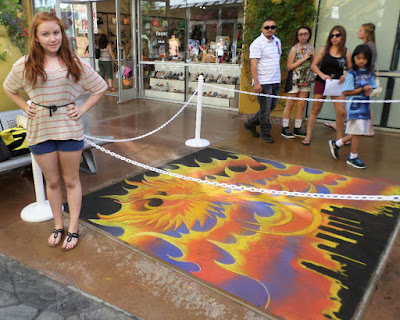 Here's Phoebe in front of the finished mural.  It's called "Phoenix Rising". 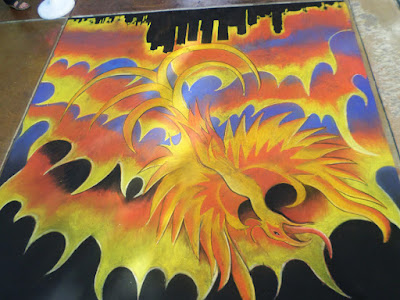 This is an upside-down close-up.  The city is, of course, Phoenix.  I thoroughly researched the city's silhouette online and found it beyond annoying when people walked past saying things like "Look it's a phoenix flying over New York!!"

And this is a photo taken by a tall lady who offered to help me out! 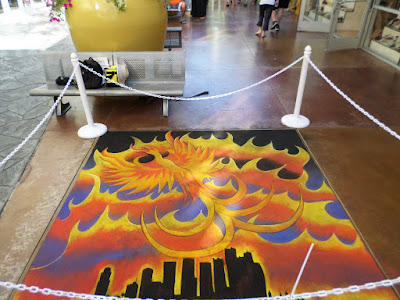 After finishing I took a look at some of the other artists' progress... 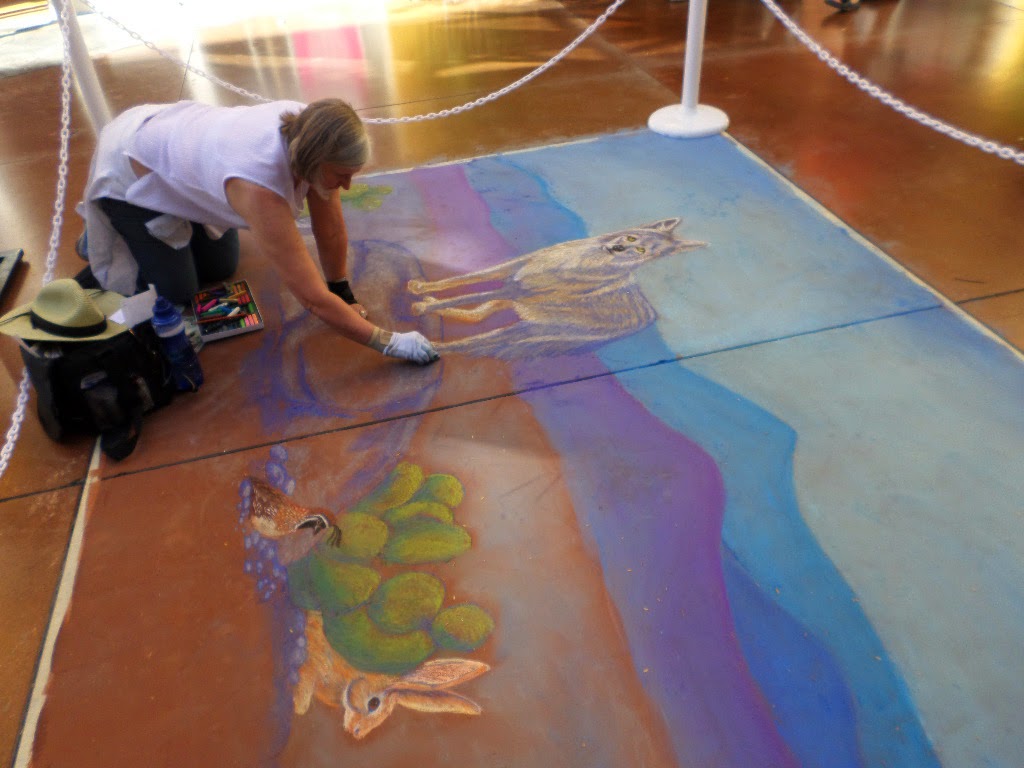 This is Linda Harrison Parsons hard at work. 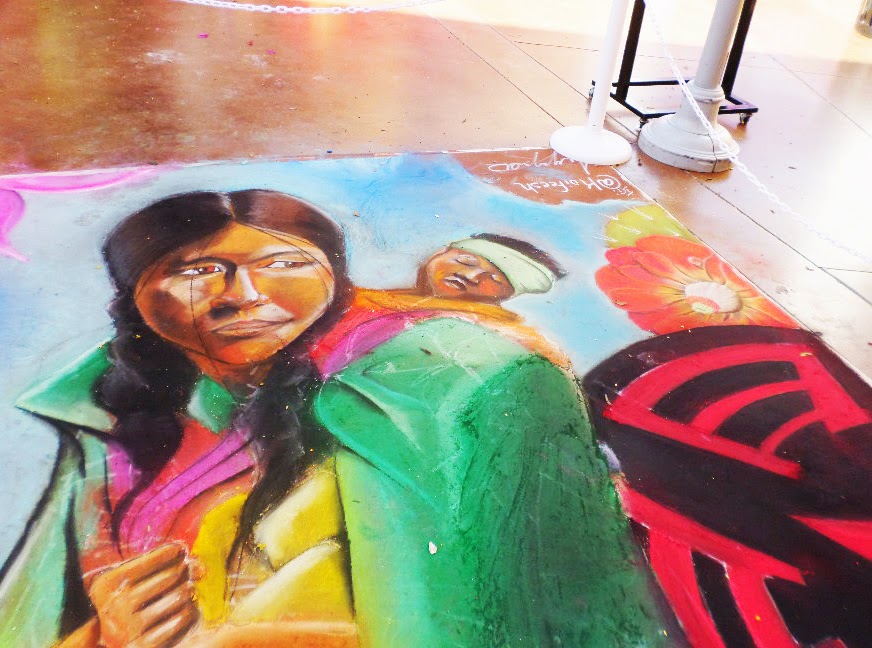 My friend Chris Leon's mural. He came all the way up from Tucson that day! 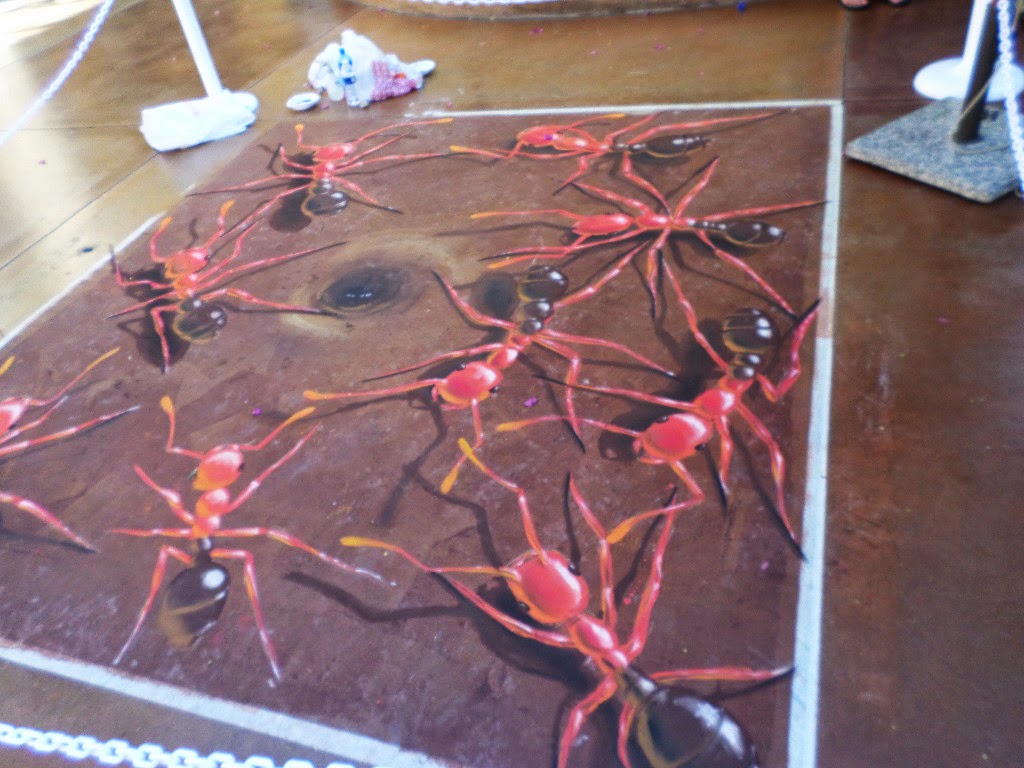 And some very creepy giant ants by José Ignacio (also from Tucson).  Incredible work, as he was stuck in the sun most of the day! The murals will be on display until the end of the month if you live in the Phoenix area.

By Sunday the weather was back in the 80º's, I picked up Mike from the airport and we spent the afternoon at the theater.  Mike's Aunt Jill and Uncle Ray met us for a naughty puppet show called "Avenue Q"  it was truly hilarious! Happy Monday. :)