The fiesta bowl parade and Christmas is over.

On Christmas morning I took the dog for his walk as I always do.  We found ourselves in an alley. Dogs barked at us in a panic behind wooden fences and neglected citrus trees stretched their branches over head.  Once perfect oranges and lemons litter the ground, drying in the desert sun and huge trash cans line the side of the alley, some spilling trash onto the ground. Near the wooden fence I find an old looking box.  Printed on the outside it said "If all else fails, open this box".... 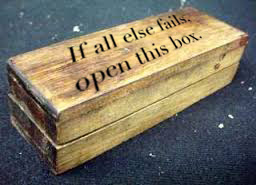 I didn't open it.  I like to keep my options open.

Last Friday, Chloe left for winter camp in the mountains of California.  She's been traipsing through the snow, and warming herself by the fire for the last few days.  In the meantime we spent Saturday with some friends. They live on Central Ave. and every year at this time The Fiesta Bowl parade goes marching past their door. 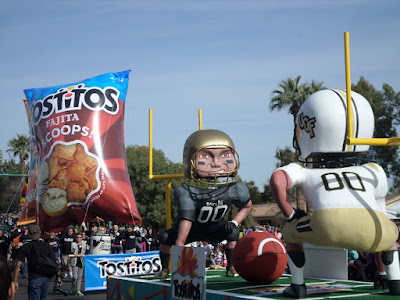 It's a huge parade, so they set up many chairs along their curb and they throw a big party at the same time. 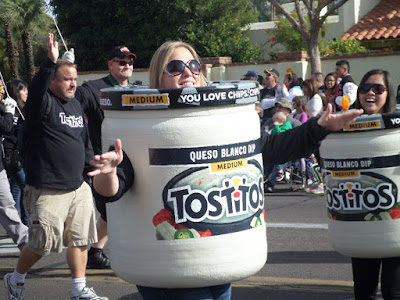 The Tostitos people were handing out chips and dips. 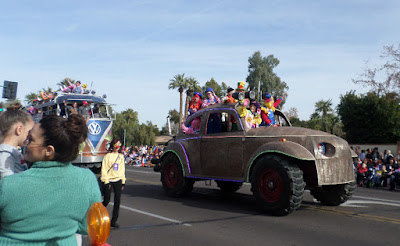 The clown car was quite a sight! 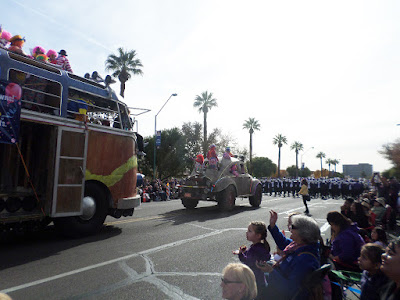 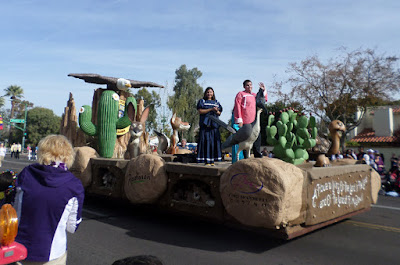 The Fort McDowell float was amazing! 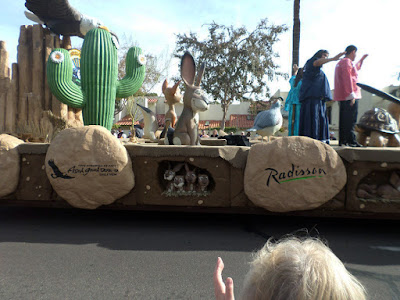 Little critters were even sculpted into the side. 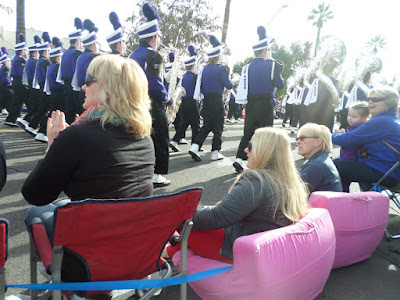 These ladies grew tired of seeing all the empty chairs from the party (lots of people were inside eating, drinking, and believe it or not watching the parade on TV), so they sat in them.  This marching band was from Pittsburgh and these guys looked like they were ready to pass out from the heat (it was about 75ºF). 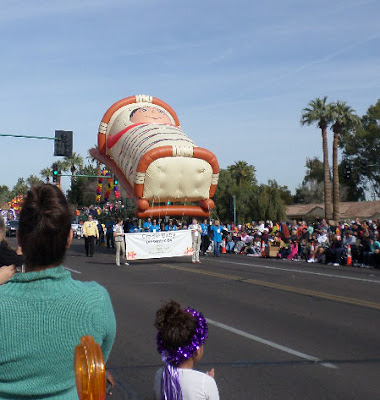 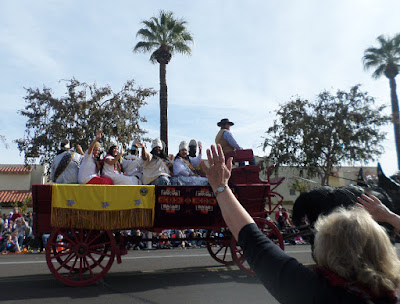 One of the local tribes. 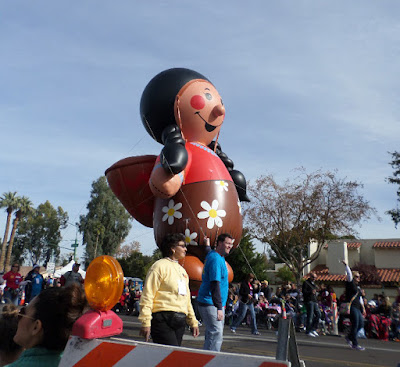 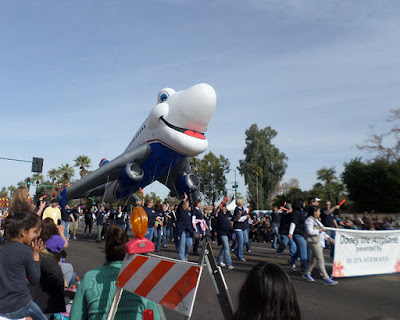 An airplane with silly face... This one's from US Airways (there were at least 2 others from various airlines). 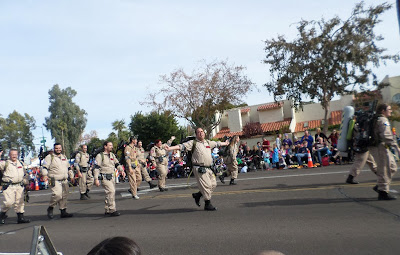 I had no idea this city was protected by so very many "Ghost Busters"! 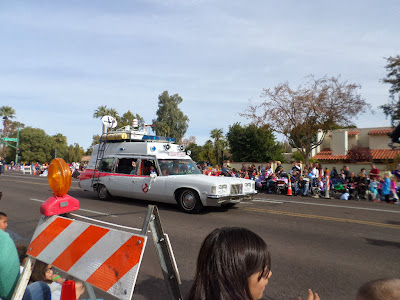 Of course they're nothing without their truck. 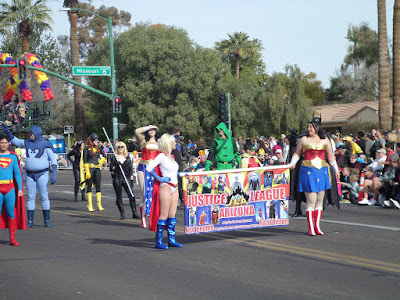 Speaking of feeling protected, the Justice League was out in full force. 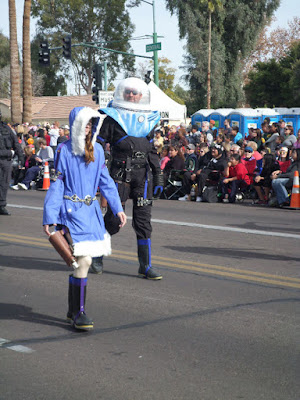 Mr Freeze was probably ready to melt. (I, of course, got a sunburn even with a liberal coating of sunscreen on). 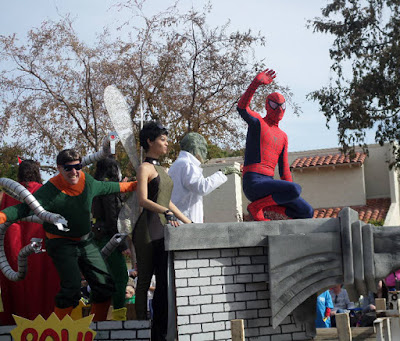 Spiderman and his nemesisesssss....  (ok, I know that's not a word, but fun to say!) 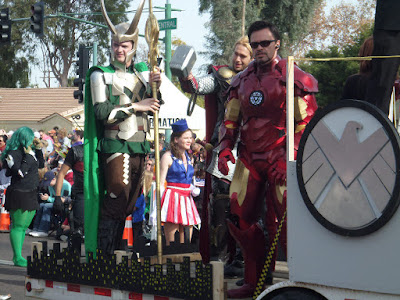 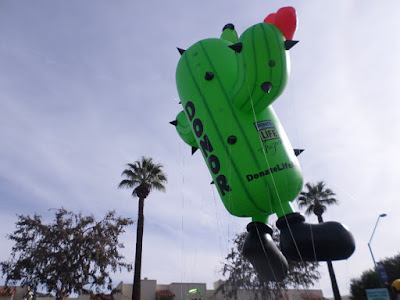 A cactus floating past (This happens a lot at parades in Phoenix). 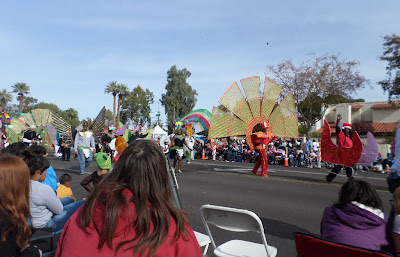 A group from the Caribbean. 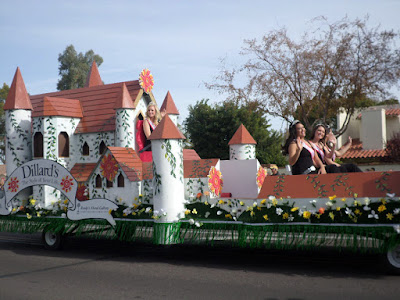 I think this was Miss Arizona or something. 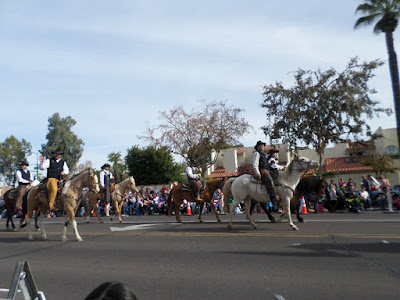 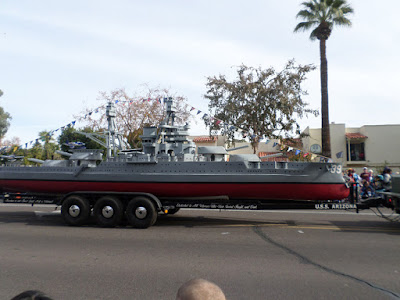 And finally, this is the USS Arizona.  They drag this out for every parade.  I even have a photo of it on this blog from the Veteran's Day Parade last year.  It does photograph well though.

There was a lot more to this parade (it's like 3 hours to watch it!), but we decided to go in and eat and socialize at the party after a while.  Definitely the way to watch this parade!
Email Post
Labels: Box christmas dog walk Fiesta Bowl Parade mystery box parade