Since we arrived here in San Diego in late May we've been slowly adjusting to our new surroundings. At first the very fact that so many people were speaking English everywhere was overwhelming. In Bariloche we would tune right in to ANYONE speaking English nearby so when we first got here it was a cacophany.
The girls have quickly adapted to their schools here. The year round schedule made it possible for Chloe to catch up to her class and she will graduate fifth grade on time even though she only just started her grade in March. Naomi and Phoebe however will have to keep going in their respective grades in September. In Naomi's class, another little girl just moved here from Japan one week before us, and she will probably be in Naomi's class in the fall as well. This school is full of kids from all over the world and the U.S. It's like a little UN every time we go into the school- I hear Spanish, Japanese, Mandarin, and other languages I don't recognize. Unfortunately, we are at the school a lot. Due to California's severe fiscal problems there are hardly any buses so we drive them everyday. This will become more complicated in September when Chloe starts middle school and we have to drive her to a different location.
We've been exploring San Diego each weekend and it seems this city is full of things to do and places to go. We haven't even made it to the beach yet!
Phoebe and Naomi posing outside our new home in San Diego.


Phoebe admiring a sculptor's work in the Spanish Village. 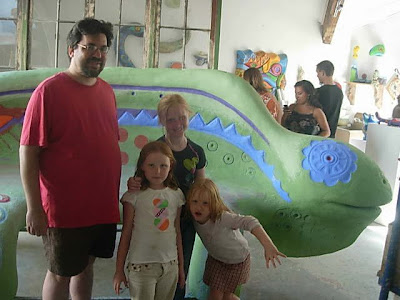 Uncle Rob and the girls hanging around a sculptor's studio in the Spanish Village. 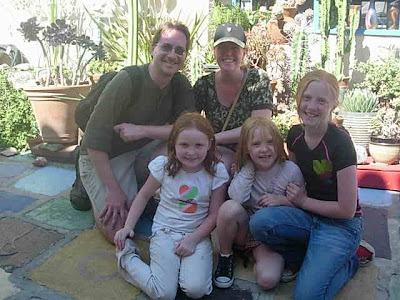 We posed together at the Spanish village in Balboa park. A stranger offered to take our photo in front of the beautiful cacti display.... She directed us left, then right, then crouching ... 6 mintues later we got the picture, but no cacti. :) 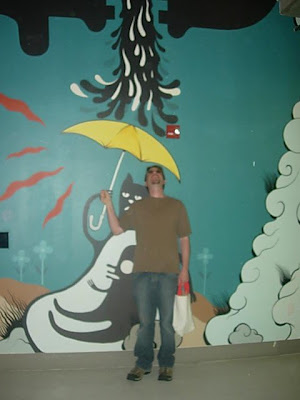 Mike :) -At The New Children's Museum downtown... We went on their free Sunday event, and we all had fun! 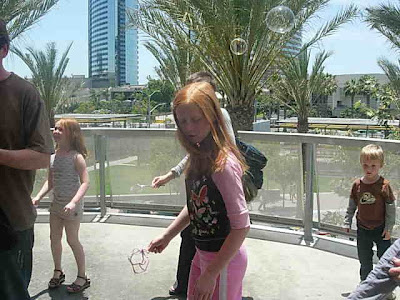 Chloe on a crazy contraption at the Children's Museum. 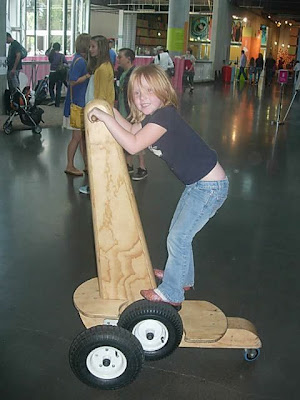 Here's Naomi on the same contraption.


Phoebe won free tickets to the San Diego County Fair through her school, so we all went. Apparently this is one of the various "pieces of California" the Governator is trying to sell so there were people everywhere with petitions trying to "save" the fairgrounds.


Here are the girls in the garden at the fair wearing some super cool glasses they picked up at the booth run by buddhists.
The fair was great and I'm looking forward to returning next year when it's owned by " Pepsi"!!
Email Post
Labels: Children's museum county fair ferris wheel moving San Diego school