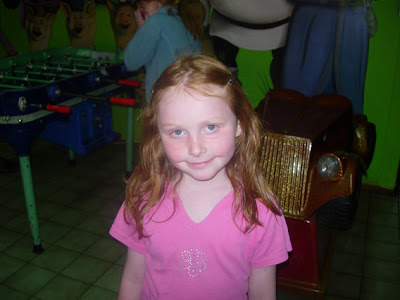 Here she is .... The birthday girl, before her guests arrive. 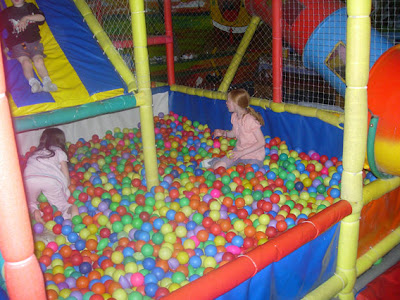 Chloe and a friend in the ball pit. 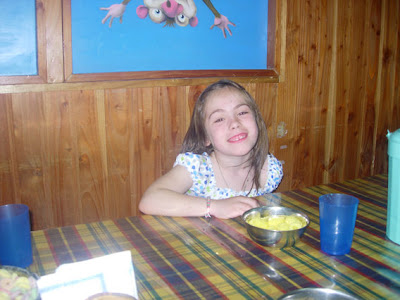 This is Phoebe's best friend Valen (short for Valentina). She's one of the best English speakers in their school and is only in second grade. She really helped Phoebe adjust here and learn Spanish.
Her other best friend is Eric. Eric just joined Phoebe's class two months ago and is from Colorado. Phoebe has been helping him adjust to school and learn Spanish. She's become completely fluent and speaks like another Argentine kid to all her friends! 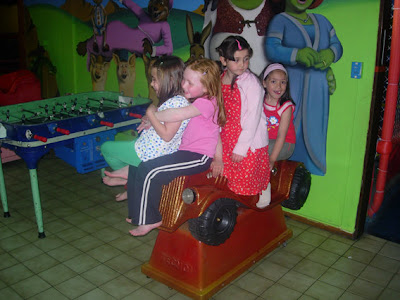 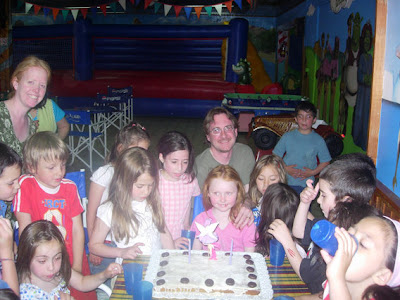 Look at the pretty cake! 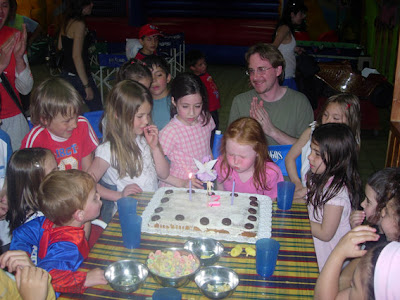 Make three wishes and blow out the candles already! She sat and thought and thought while wax was melting all over it! 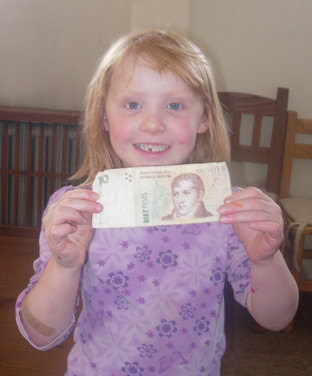 Naomi lost her first tooth last week. It was surprisingly traumatic. She was eating a cookie and began crying that her tooth was bleeding. We quickly realized her tooth was gone but couldn't find it anywhere. After twenty minutes of searching we finally concluded she must have swallowed it while eating the cookie. That night we wrote a note to the "The Tooth Mouse"or "El Raton de Piedras"(we're out of "Tooth Fairy" territory here), and he came through with 10 pesos!

Here in Argentina we've been living without a car. I love living in the city and being able to walk to the grocery store, the art supply store, the bakery, and to almost everything else. When we first arrived the girls would walk incredibly slowly and get tired after just a few blocks. Chloe and Phoebe are like regular city dwellers these days, walking several paces ahead together talking animatedly. Walking with Naomi is still a bit like pulling a stick through the mud but she's also gotten a lot better, she's just easily distracted by flowers, store windows, wandering dogs, and shiny things.
A couple of weeks ago Chloe and I packed ourselves into a friend's car on our way home from yet another birthday party. I pressed myself into the corner against the door as Chloe and three other ten year olds sat with me in the narrow back seat. Another two kids and two adults were in the front, and they drove house to house all over Bariloche dropping kids off. Finally at our apartment we climbed out and Chloe made an interesting observation as we made our way to the front door.
"In Argentina everyone carpools, even though they have really tiny cars, but in New York no one ever did even though they had huge cars!"
Out of the mouths of babes......
Email Post
Labels: Argentina Bariloche birthday birthday party carpooling school overseas spanish tooth fairy tooth mouse walking in the city

Kristin and I lived without a car from 1999 until Oct 2007. It is easier without kids, but we did well. I suspect part of that is living in Munich, Portland and then Seattle. Not the hardest locations for car-free life. Even now I am still cycle-commuting. BTW I love the drawing of Centro Civico.
November 17, 2008 at 3:26 PM

Carolyn Watson-Dubisch said…
Phoebe is amazing, but so are all three of them. Naomi is also nearly fluent but won't talk to me or Mike in spanish, only Argentines... Chloe just recieved a 7.65(out of ten) on her lengua final exam... Spanish grammar.. I looked at this test and knew I couldn't do it!
I hate driving and all the cars are manual here anyway. We lived car-free in New York City and Albany, but this is the first time since the kids were born. What's this about a 200 mile bike trip?
November 22, 2008 at 5:26 AM