Hola otra vez from Bariloche. The volcano in Chile continues to erupt spewing ash, well, everywhere. When we looked out towards the lake on Monday the mountains were completely hidden by the ash in the air. It's the rainy season here and most of the ash has been washed off the streets and buildings but the ash in the air has closed the airport for almost a month now. The border into Chile is closed and many people have been evacuated out of that region. I recently heard that lava has started flowing and there is a great concern that these eruptions will trigger an earthquake. 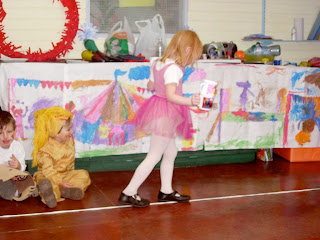 Life here in Bariloche continues, mostly unaffected by the events across the border. The girls are very involved with life at school, and brought home some very impressive report cards two weeks ago. Naomi's class in the "jardin" put on a circus performance for the parents. As you can see she was a tightrope walker( una equilibrista). One of the fathers is a magician and helped the children put on great show, he also performed for the parents at the end.

Phoebe and Chloe auditioned for a play with a local theater group and both have parts in "The Secret Garden". I'm working on sets and props and am involved in making numerous puppets. It's nice to be doing some 3-D work again as my work on my graphic novel is at a rather dull stage (just adding text on the computer). Here you can see a picture of "Robin", one of the main puppets in the show. 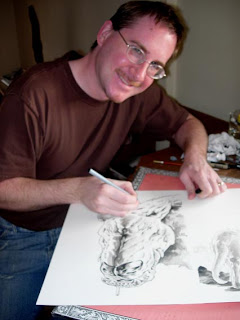 In three weeks we'll be heading up to Buenos Aires to process our residency visas. Unfortunately we'll have to take a 20 hour bus ride instead of a two hour flight, due to the ashes. Still it will be nice to see more of the city this time and perhaps it will be a nice drive through the Pampas and see some of the country between here and there.
Email Post
Labels: Andes Argentina Buenos Aires Chile circus drawing jardin props robin sets The Secret Garden volcano volcano eruption