So it’s been a crazy 48 hours here. As I write this Hurricane Pamela just tore through this city and our power is down. I’ll post this once we have wifi again. 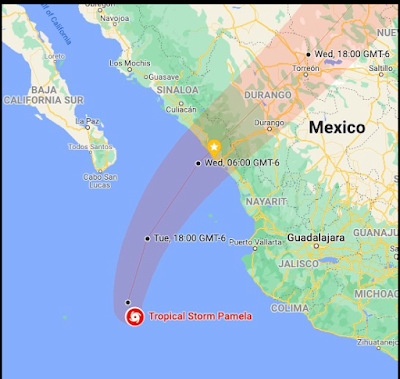 The last week and a half I’ve been so preoccupied with Halloween mask orders that I barely paid attention to the weather. I knew a storm was coming but Tropical storms come and go all the time here, and I had work to do. When I finally raised my head and looked around less than 12 hours before it arrived, everyone’s saying it’s a category three storm with a direct hit. Landfall in Mazatlan. Usually, all the hurricanes hit Cabo first or Puerto Vallarta and roll up the coast.

So I joined the panicked shoppers in Walmart. It was crazy. We waited to enter to store in a long line. I got in there and there were no carts, eventually, I found a basket. Everyone was tense, there were no flashlights, no batteries (the employee who I asked about batteries was the only one with a smile on their face, she laughed for a good 2-3 minutes).

I left with mostly candles passing the excessively armed National Guard. I very slowly (traffic was a nightmare) drove by a line for the convention center. The designated shelter had about 100 cars waiting to get in. It turns out panic shopping is not a good way to ease anxiety! Who knew?

The rain began on our walk with Oscar. He’s an annoying dog to walk. He pulled us far from the house and a light sprinkle turned into a downpour in an instant. So blocks and blocks of rushing through the rain, trying not to slip. I might as well have jumped in the ocean.

Our evening was fine. The first edge of the storm raged, but we hunkered down. We finally managed to go to bed at around 1:45 am . At about 4:30 am, Mike woke me up with his running around. It turns out everything was leaking. We had to gather buckets and fast! I started mopping up, and getting towels. Mike ran into the garage to get more buckets and I heard him yelling. With the way the wind sounded I was sure there was an accident, but no. He was surrounded by giant cockroaches that wanted to come into our house. He was fending them off with the mop! At 5am the power finally gave up. So I went to bed.