By "river" I mean the San Diego river and by "through it" I'm referring to our condo... Well not quite...yet.

It's been raining for a few days here which is all it takes to flood our area at the bottom of a valley at sea level.  Here are some photos we've been gathering. 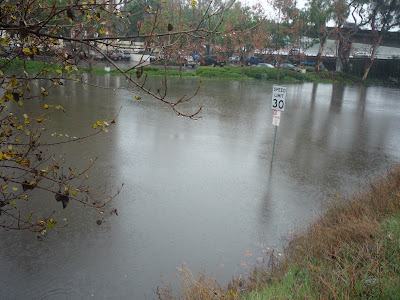 This is  about one hundred feet from our driveway on Tuesday afternoon... 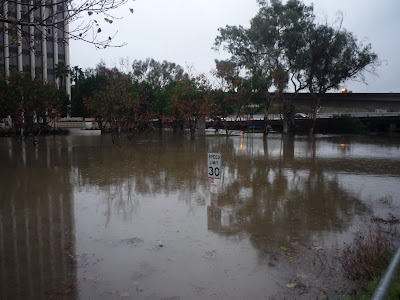 This is the same sign this morning after sun rise. 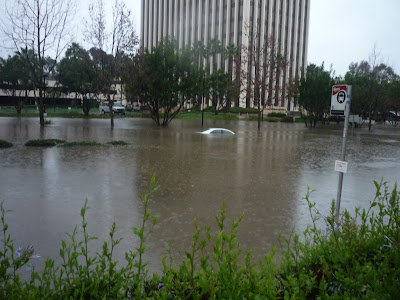 This car is owned by a local idiot who drove through police barriers and had to be rescued.  I saw them attempt to pull out the car, even the tow truck couldn't get in there.  This clever driver also left his blinkers on so the battery is sure to be dead... Though I expect that's the least of this car's problems at the moment. 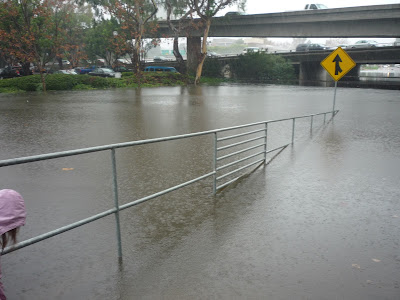 This is where the pedestrian path ends that runs past our condo and along the river. 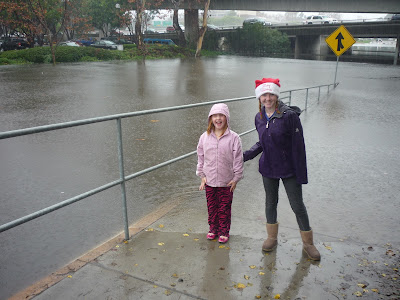 YAY! We live in a "State of Emergency"! 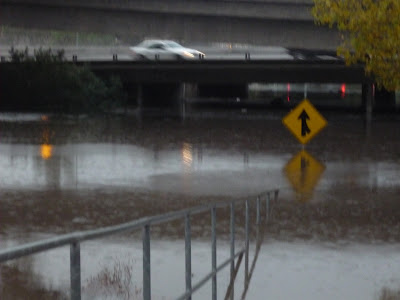 This is the same spot this morning around 7am, as you can see the water is much higher on the sign. 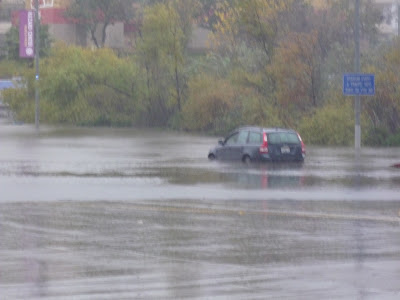 This is a different local idiot who also drove through police barriers. 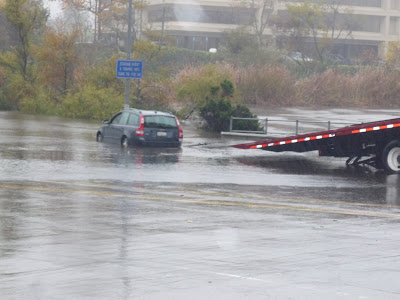 He was luckier and the tow truck pulled him out.  This was on Tuesday afternoon so since he was an idiot sooner his car was rescued. 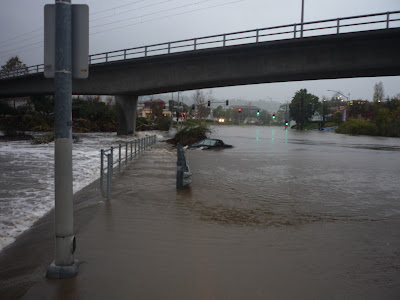 So this morning or rather sometime in the night the owner of this lovely porsche decided to take his place in the same intersection.  The river is almost level with the road and flowing like rapids across the street right now. 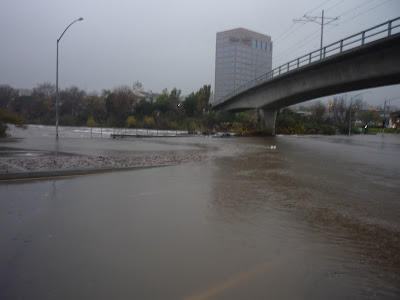 Same spot from the other side of the street.  This a huge busy street most of the time (Mission Center Road), but right now it's not passable so it's easy to walk around with a camera. 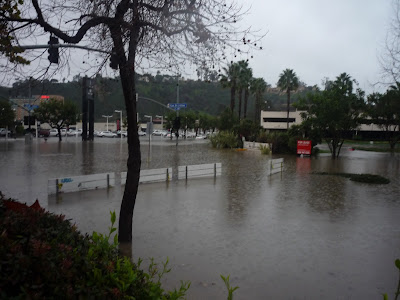 This is directly in front of our condominium complex. 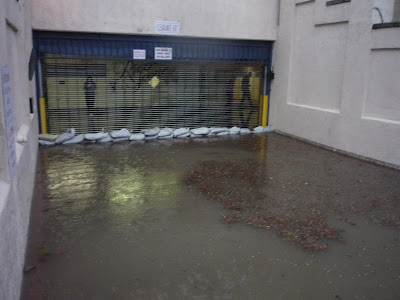 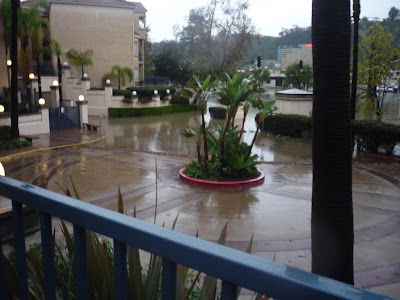 As you can see our driveway is filling up. 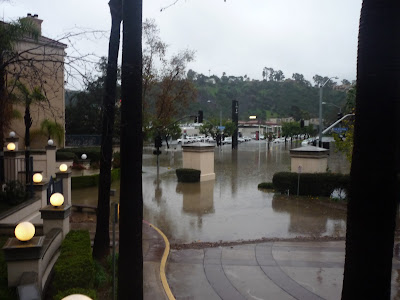 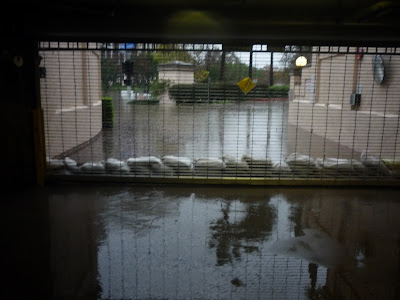 We went downstairs at 7:00am and saw that the sand bags had just breached.  There's nothing we can do, all I have is an open bag of cat litter.  We did chat with a resident who had moved his car to park on the street last night.  He thought it would be safer for his car but now it was under several feet of water. 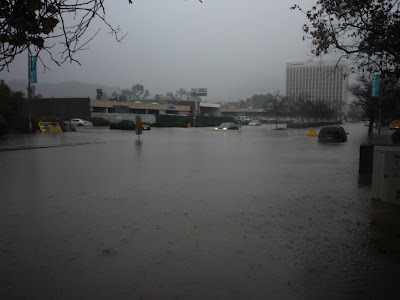 20 minutes later we saw him attempt to move his car.  I don't blame him, how could it be any worse? 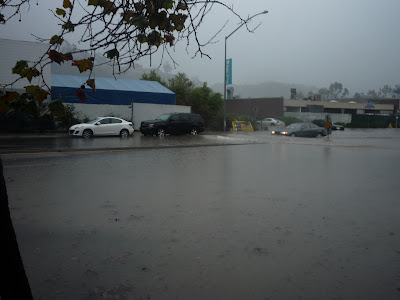 Here he is making waves!  We stood on the sidewalk cheering! 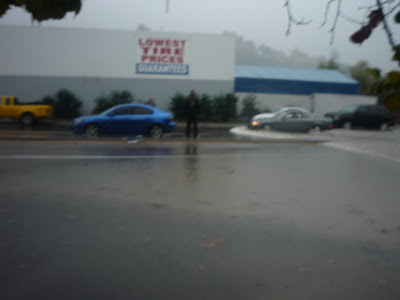 And.... HE MADE IT!!!
Now I just hope our car makes it down in the basement.  At least it's an SUV and is higher off the ground.  I'm worried though, it's supposed to keep raining all day.  Nothing more to do here, but pile towels against the door!
Email Post
Labels: flood flooding porsche San Diego River sandbagging water park

petitehermine said…
Holy. I had no idea San Diego flooded like that! That's good to know. This might alter my consideration of San Diego as a place to live. Thanks.
December 22, 2010 at 9:55 AM

Carolyn Watson-Dubisch said…
Apparently it's something of a holiday tradition around here to see Christmas gifts go floating out of cars and down the street. Trust me, as someone who has lived in many regions, everywhere has some drawback!
December 22, 2010 at 10:36 AM

Carolyn Watson-Dubisch said…
Update 12/22/2010 at 3:22pm: Our car is now standing in 3-four feet of water in the garage. The electric company is coming to see is they need to shut off power for safety reasons. According to the management here evacuation is not mandatory at the moment, but the worst of the storm is yet to come.
December 22, 2010 at 3:22 PM

nothing profound said…
How awful! I hope the rain stops soon. We have flooding around here quite often in the spring. Several years ago, it was very severe and many people lost their homes.
December 23, 2010 at 6:21 AM

Unknown said…
Goodness me! I hope your car will be OK. It reminds me a bit of when I used to live in a flat by the river, and luckily I sold it 8 months before a major flood covered the surrounding area (the flat itself escaped - just). Hope things improve for you soon.
December 23, 2010 at 6:52 AM

Just when we think we conquered the impossible, nature shows who the boss is.

Megan Raines said…
Amazing! I've never seen so much rain in California! Good Luck. I hope everyone stays safe and can still enjoy the holidays.
December 23, 2010 at 9:40 AM

Lita C. Malicdem said…
I guess you ended up wishing for a Dry Christmas, not the Merry Christmas it used to be. Hoping that the worse had passed now.

The heavy rains and the floods know no place and occasion when it comes in its full force. My country, the Philippines, is frequently visited by the same calamities- strong typhoons that create flash floods, the strength of which topple down buildings, destroy bridges and houses and worst-kill people.
December 27, 2010 at 12:46 AM

Tony McGurk said…
We have just had major flooding here in Australia too. We were unaffected here in Tasmania but the flood damage & loss of life on the mainland was just terrible. Major flooding is becoming so much more frequent lately
February 4, 2011 at 3:43 PM