The Tramway and Downtown El Paso

Yesterday morning we took it slow. Mike and hiked with Oscar in South Mountain Park (or we tried to). Then we realized it was way too sunny, so we went to check out where the Wyler Ariel Tramway was so we could come back with our kids when they woke up.


It looked like a nice little activity at 8am. No one was around as they were just opening and the view from the parking lot was fabulous, we could just imagine that the top of the mountain would be amazing!

Around 1:30pm we finally got all our kids moving (teenagers!) and drove over to the Tramway. It was packed! For labor day weekend everyone showed up to ride the tram. They told me when I bought the tickets it would be an hour and a half wait! 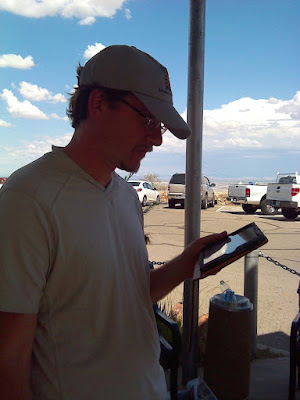 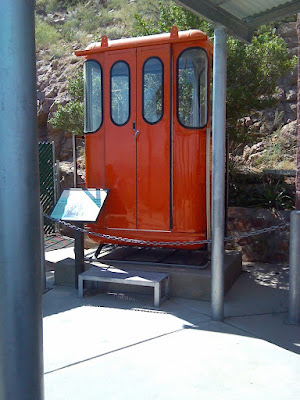 We looked at the little displays they had up. This was the old gondola car they used to use. 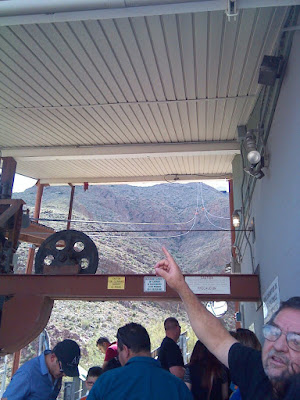 We watched the two little yellow cars bring people up and back, seven at a time. 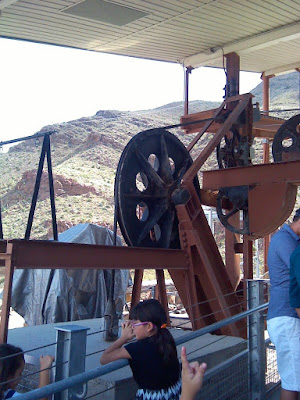 We learned about the counterweight (the giant concrete block) that went up and down as the tram climbed up the mountain. Until finally it was our turn! 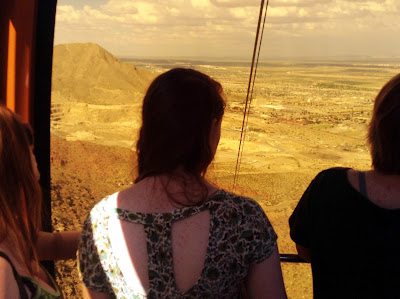 We rode standing up inside the gondola, which was different than the one we went on in Argentina to go up the mountain and at the San Diego Zoo that flies overhead. 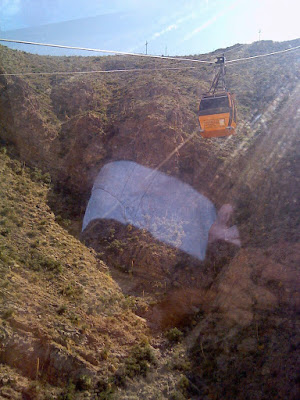 It seemed like we were go slowly up the mountain, but when the other car passed us it zipped by! 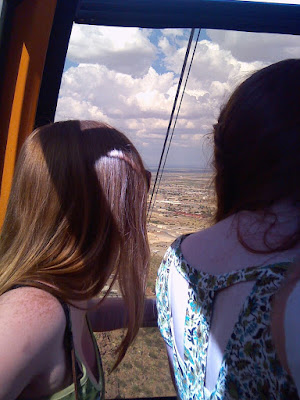 The view was spectacular, but we were a bit crowded inside. 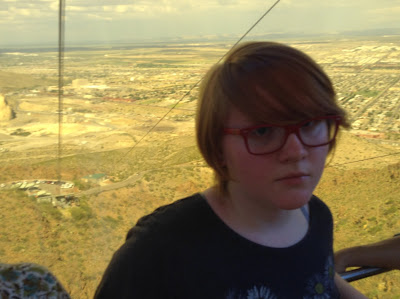 Naomi inside the tram. 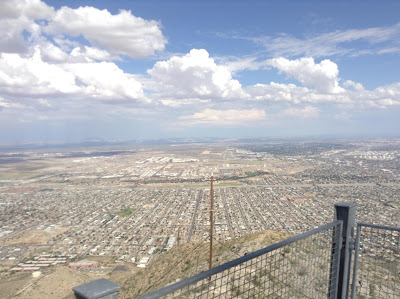 The view from the top was pretty awesome. 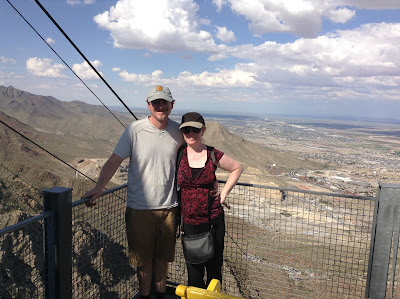 Mike and I at the observatory. 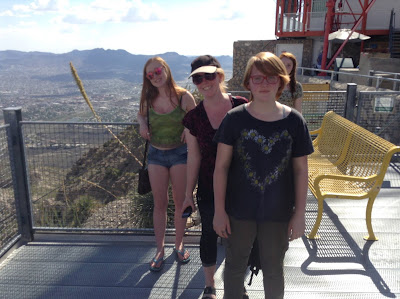 The girls and I at the top! 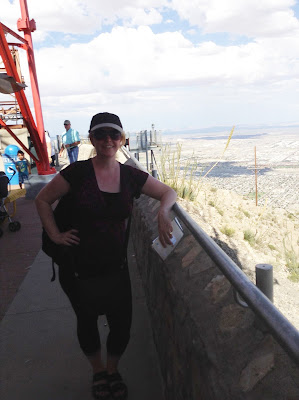 Staying in the shade. 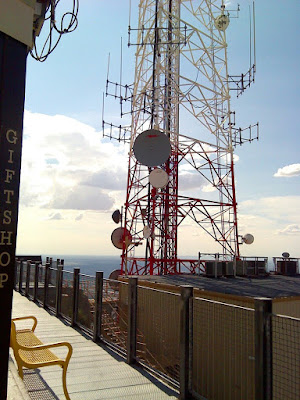 When you climbed to the top of the observation deck you could get a close up view of the radio tower. 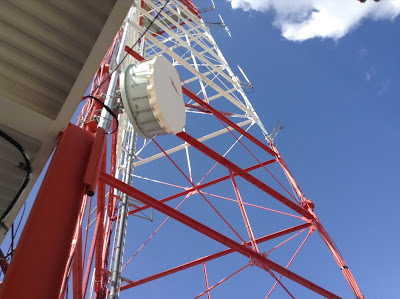 It was pretty amazing.

From the top you could see El Paso, all the way into Mexico and into two other states, New Mexico and Arizona!

After milling around a bit and checking out the gift shop it was time for the ride down. 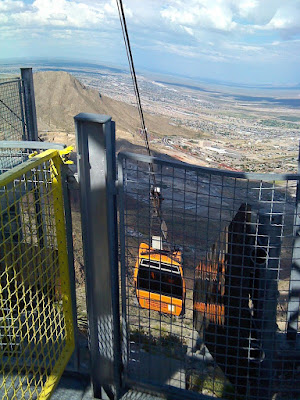 Our ride down arriving at the gate. 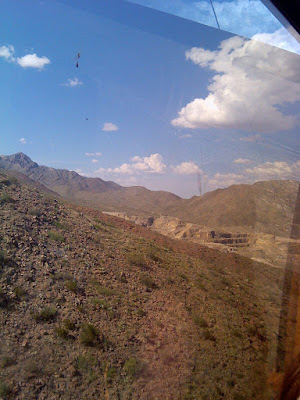 A final shot out the window.

After the tram we had a late lunch at the house. When I came back I plugged in my phone in Phoebe's room and after lunch I went to check on it. I sat on the floor leaning against my daughter's bed and uploading photos from my phone while it was still charging in the wall plug. As I sat there I felt a tapping on my lower back from under the bed. I assumed it was the cat and kept swatting my hand back at her to make her go away. Then I finished, got up, and walked in the living room, where the cat was sound asleep in a chair by my husband. He said she'd been there for half an hour at least. I ran back into my kid's bedroom and looked underneath. It was empty.
Anyway between the strange incident with the dresser (see yesterday's post), and the fact that every night so far in this house my dog spent wandering in and out of each bedroom whining, while my cat had her night time irritation level set on high, I was getting a little weary from it all. 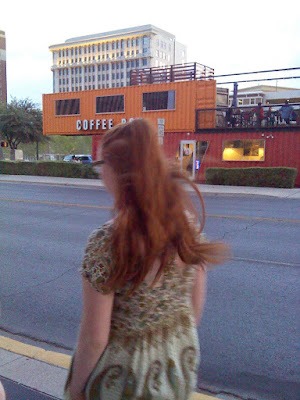 That evening we went to explore downtown El Paso. This is Phoebe by a cafe made from shipping containers. 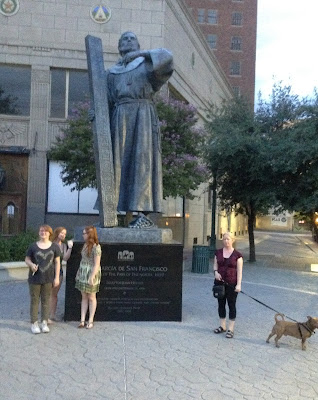 By a statue in the plaza. 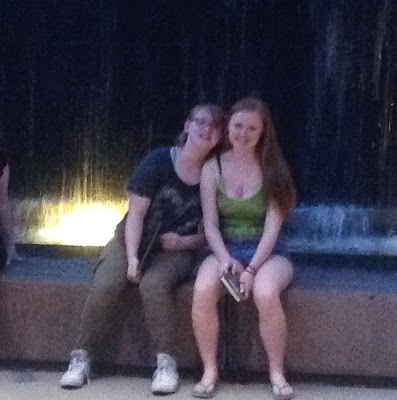 Naomi and Chloe at the big fountain by the art museum.

After walking about it was time to get dinner before all the lightening we kept seeing turned to rain. We stopped at a place called the pizza joint and while the girls sat out at the sidewalk tables with Oscar, Mike and I went in to order and get drinks. 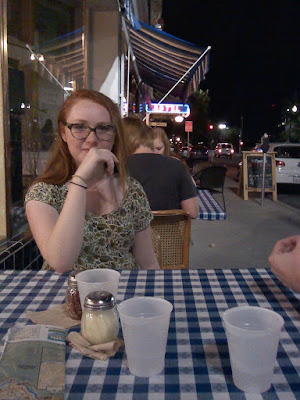 I guess the interrupted sleep got to me, because when I came out with the drinks Oscar jumped out in front of me and tripped me with his leash. I landed pretty hard and by the time I was going to bed my knee had swelled up like a grapefruit!  This was going to be a long drive home.... 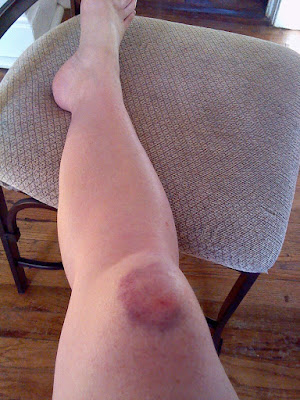 little addictions said…
Hi Carolyn!
I saw your delightful exhibit, "Books of Whimsy," at Burton Barr's Central Gallery. If you have a few minutes to spare/share, I'd love to talk with you about it. Please contact me and let me know if I can email/call you directly.
Thank you!!
Elizabeth Howard
September 8, 2015 at 11:42 AM