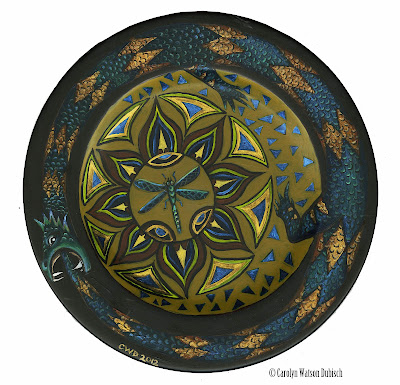 Last week I found some sizable wooden plates at Goodwill.  I brought them home and painted this one.... I think it's rather pretty.  The iridescent paint is working quite well.  I've decided I'll be doing these as a series for a while.  This mandala drawing I did last week is currently up on eBay... 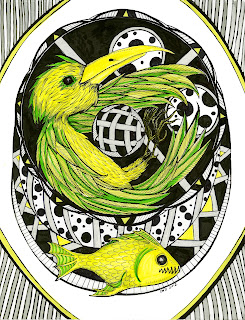 In other news:
My kids are busy with school....

“A long time ago, there was no such thing as school, and children spent their days learning a trade, a phrase which here means "standing around doing tedious tasks under the instruction of a bossy adult." In time, however, people realized that the children could be allowed to sit, and the first school was invented.”-Lemony Snicket

They are adjusting quite well to their new schools at this point.  It's actually a struggle for me because for the first time ever they are in three different schools.  Which makes me feel like I'm being pulled in three different directions (which they literally are from my house, no one's school is really "on the way" to the other).  The schools here have an "activity fee" which was $50 we had to pay at enrollment to cover field trips and other events.  This is actually quite awesome, because since they started they have ALL been on field trips and had numerous special assemblies.  In California they NEEDED to do this but instead of asking parents for money they simply hardly did much in the way of outings or events.  It's nice to see them getting out of the classroom so much.

Carolyn Watson-Dubisch said…
This bird/fish mandala sold at auction! Thank you to my collectors.
December 6, 2012 at 9:36 AM

Carolyn Watson-Dubisch said…
The wooden mandala has been sold and is being shipped to a collector in Cincinnati.
December 9, 2012 at 7:39 PM