Last weekend was the H.P. Lovecraft film festival at the Warner Grand Theater in Los Angeles. 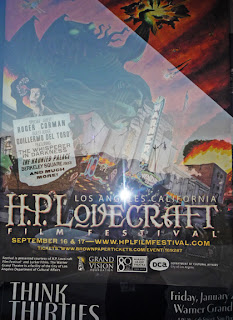 This is a really cool poster that's hard to see thanks to my lame photography skills.  We raced up to L.A. after we picked up Chloe from school on Friday at 2:30pm. We arrived at our hotel at 6pm (this drive usually takes 2-3 hours) to discover that even though we booked a room for 5 people there were only 4 places to sleep and they refused us a roll away bed! 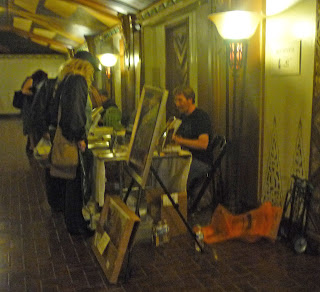 Mike was a guest at the festival and his art was shown as slides between films.  Here he is selling his art and books .  Though it doesn't look it this was actually a pretty crowded event. 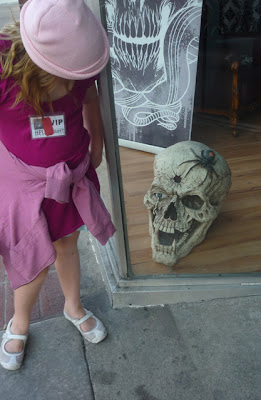 After spending a lot of time in the "Green Room" eating the complimentary food for guests, and playing cards. I managed to get the girls to come for a walk around town with me.  Naomi found a skull. 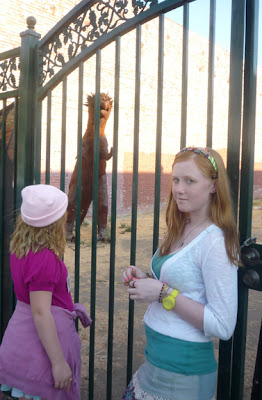 A dinosaur lurked beyond this gate.
The festival was great but exhausting.  Especially the part where we took turns sleeping on the floor.  And the part where my kids were so tired they woke each other up to fight and yell some more. That was the worst night in a hotel in recent memory.
On Monday was Mike's 40th so we thought we'd do something special... 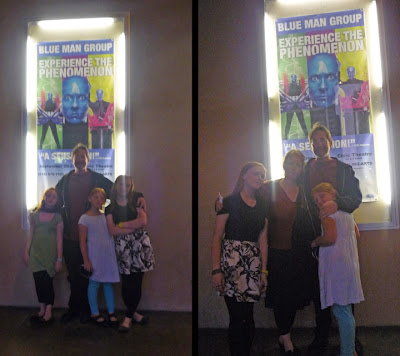 In these lousy pictures we are posing in front of  the poster for "The Blue Man Group".  Which was an amazing extravaganza and if you have never seen them... GO! The Civic Theater downtown is a great venue. Mike and the kids are studying the massive chandelier before the show. Happy Birthday Mike! This week I've continued to work on the sets for "Nunsense" which is opening horrifyingly soon! 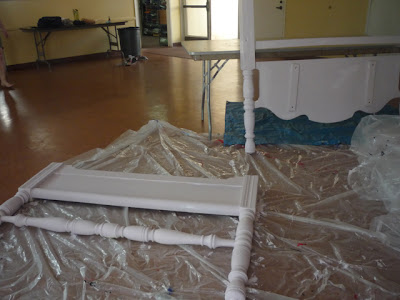 As you can see I've started on Sandra Dee's bed frame.  Time's running out and yes, I'm a little panicked.
Today I start teaching art again through an afterschool program at a local elementary school.  They gave me a curriculum... I'm changing it (yes, I have permission), but seriously, lesson one is drawing 3 different kinds of lines!!  Forget that we're doing cartooning. 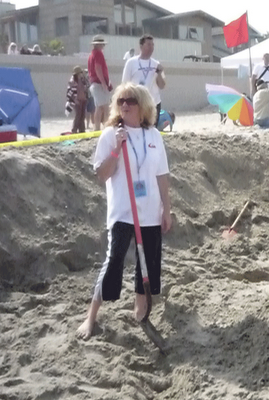 Today my heart goes out to our friend and team mate from the US Open Sandcastle Competiton , Kristen Clark Magnus, who was bitten by a baby rattlesnake in her garage yesterday.  She was kept overnight at the hospital for treatment.  Speedy recovery Kristen!!
Email Post
Labels: art class H.P. Lovecraft Looking Glass Theatre Lovecraft film festival Nunsense rattlesnake The Blue Man Group U.S. Open Sandcastle Competition

Anonymous said…
Carolyn,
I am wildly impressed. I just love artists and you can be sure that I will come back often! I love the counter in the post below as well. I think I want it!
September 24, 2011 at 3:38 PM

scribadiva said…
Wonderful post! I hope to start adding more photos to mine as well, but you are always entertaining, even in a flood! I love Lovecraft. I've seen re-animator, and read a few books, but if you saw any other movie, please let me know. Netflix has Reanimator, but I couldn't find others. I know I'm following you: it 's easier to use my Blogroll to read rather than BC. AT some point I'll get to reviewing you, but I'm a bit disposed right now, having a hard enough time posting. Sweet tides,
September 24, 2011 at 6:31 PM

MikeDubisch said…
Scribadiva- we're still waiting for the great Lovecraft blockbuster, but till then the other films worth catching are "Dagon" and to a lesser extent "From Beyond"... the just released "Whisperer in the Darkness" is supposed to be very good, so keep an eye out for that. :)
September 28, 2011 at 6:32 AM