Hollywood Blvd and the Hyaena Gallery

Saturday was the opening for Mike's solo show in Burbank, conveniently scheduled from 8pm to 12 midnight.... So we went up early to see Hollywood Blvd. and Madame Tussaud's wax museum (I had a coupon).  On Hollywood Blvd. is, of course, "The Walk of Fame"... 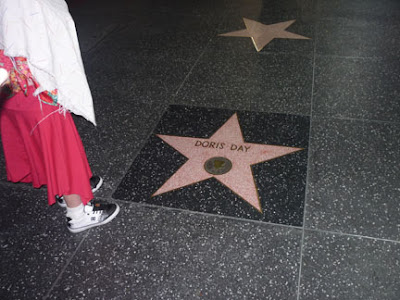 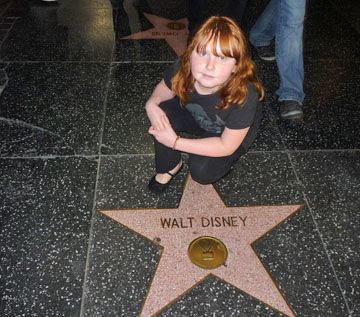 After weaving through the crowd we found the wax museum... 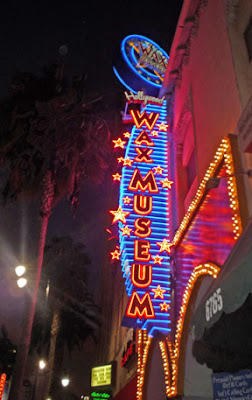 How convenient, just a block from where we parked! 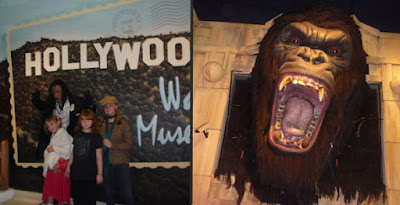 The entrance was full of people and exciting displays!  The coupon,  though, was for the wax museum up the street.  So we plunged back into the crowd of tourists and wild characters that filled the sidewalk. There was Hello Kitty, storm troopers, and Michael Jackson doing the moonwalk. 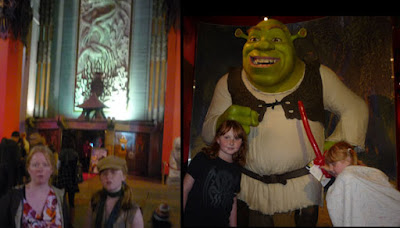 Here we are passing the famous Grauman Chinese Theater only to find the giant wax figure of Shrek at the right wax museum. 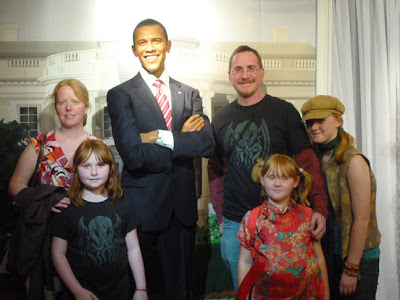 As we stepped inside we got our photo with Obama.

Here's the girls cuddling up with Simon Cowell  and posing with Johnny Grant.

As you can see the figures are placed in the center of the floor. So you can pose with them in entertaining ways.  And it was quite entertaining!

The room of western stars even had props! 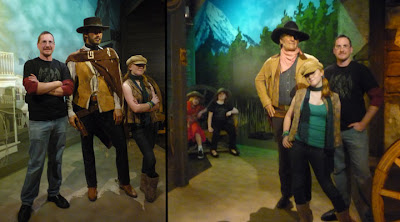 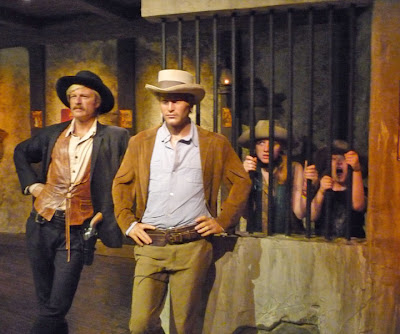 Mike met up with Hannibal Lecter... 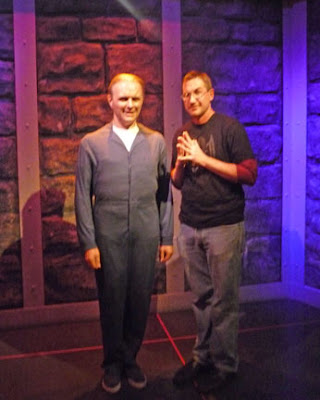 "Tell me again about the box of chocolates." 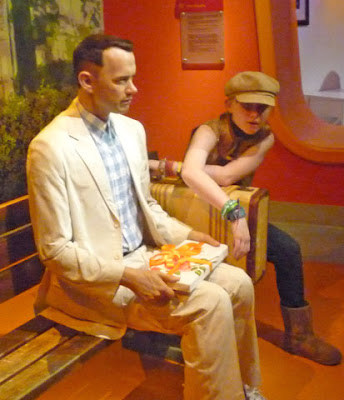 There was a whole set for "Glee". 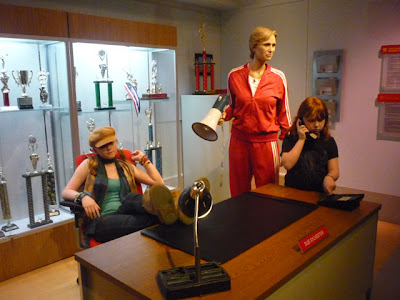 And the command deck of "The Enterprise"! 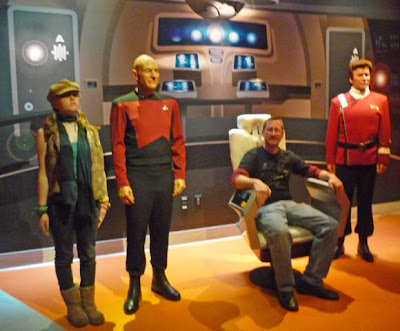 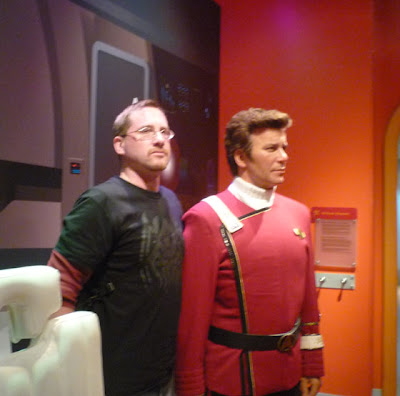 Skating with Tony Hawk and climbing the ceiling with Spidey! 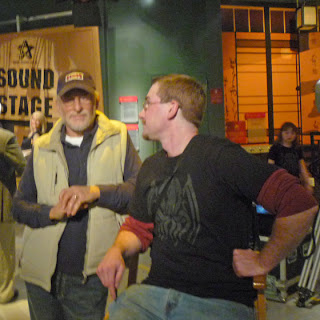 Who had little to say, and the girls sat with Jack Nicholson... 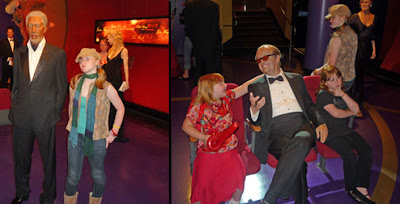 As I stood next to Leonardo DeCaprio I was impressed with the likeness these sculptors captured. 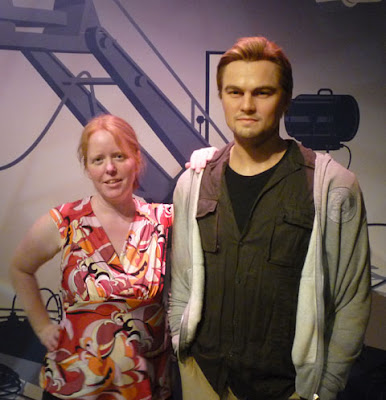 On the last floor we learned about more of the process with these face molds in the hall...

We were introduced to the likeness of Madame Tussaud, the French woman who started it all and traveled the world with her wax sculptures.  She even became shipwrecked on an island near Ireland at one point. She was also very small in stature as you can see... 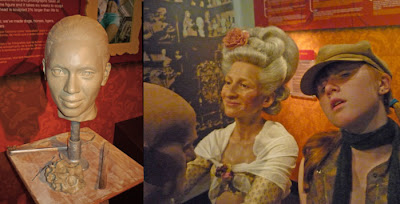 This is a display of eyes and teeth.  For $12 you can also get your hand done in wax like this guy was doing...

By the time we made our way through, it was time to head over to the gallery.  This is Mike's work on the walls before anyone arrived... 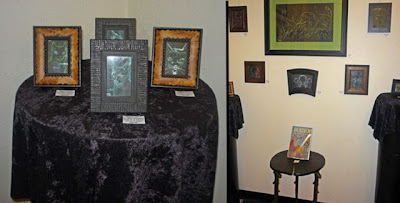 Chloe taking a look around...

As people arrived, the food and drinks came out.  Naomi walked about with a glass of apple juice and managed to spill it fairly quickly.  People rushed about with paper towels and Naomi went to clean off in the bathroom.  About five minutes later the gallery director came running up to me.
"Your daughter has locked herself in the bathroom and is VERY upset."
I followed him to the door and could hear her crying.  "Ok, honey is there a button that you pressed?"
"Yes."
"Can you press it again?"
"No." She was very quiet at this point.  The director ran off to get tools to pick the lock.  Then a yellow liquid started seeping out from the door. (Please don't be pee....)
"Ummm... Honey, did you spill your apple juice again?"
"Not anymore."
By now the director showed up and popped open the lock, glancing suspiciously at the yellow liquid.
Naomi wandered out and ... YES! it was apple juice!  (Thank you!). 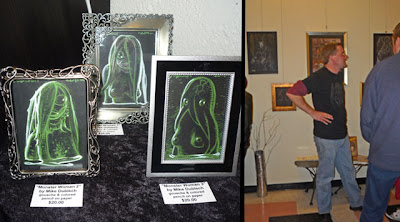 There was a pretty good turnout and Naomi only locked herself in the bathroom 3 times!

Today was the auditions for "Seussical" .  Since this is an all-ages production and the Looking Glass Theater has open auditions, Phoebe and Naomi went in to try out.  It looks like they'll be playing "Whos" from "Whoville"!!  How cool is that?!
Email Post
Labels: Hollywood Hollywood Blvd Hyaena Gallery Madame Tussaud Seussical wax museum

Anonymous said…
Homely post, is what I would say!!
Nice....it always brings a smile to my face when I see families having fun..God bless you all and be in bliss forever..
Keep blogging..:)
February 7, 2011 at 2:54 AM

Karin Bartimole said…
quite an adventurous day!! Sounded like a lot of fun, with some nice success mixed in with the art sales and acting roles! Congrats to you and your very creative, beautiful family :)
February 10, 2011 at 5:28 AM