Kent Brockman: "So Professor: would you say that now is the time for everyone to panic?"
Professor:"Yes, I would, Kent"
-The Simpsons
As the rain came down yesterday morning, something else descended on this house...cabin fever! So as soon as a break came in the storm, I took Phoebe and Naomi out for a walk around.  We headed out to the road but as you can see it was now a river.... 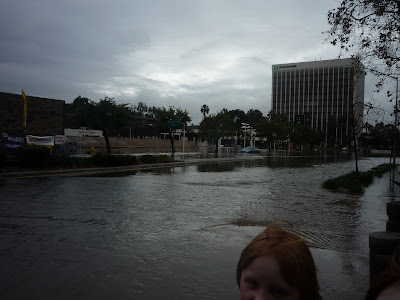 Without a dry sidewalk to walk on we headed over to the pedestrian walkway behind our building.  When we reached Mission Center Road we saw that the river was claiming it back. 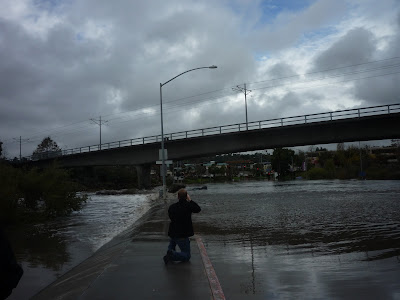 As you can see that porsche was now a black unidentifiable object.  A lot of people were there taking pictures including the Channel 10 news station. 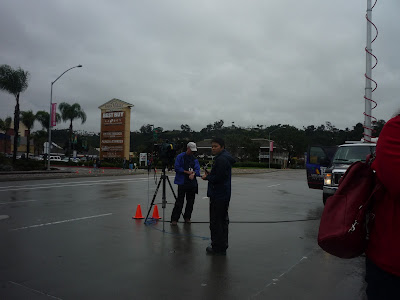 They filmed us all, especially Naomi who decided the huge new waterfall was perfect for "Pooh Sticks". 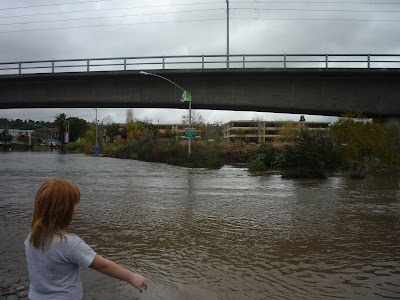 You can't tell so much in this photo but she just tossed a stick in. 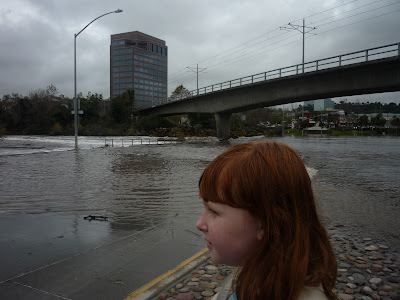 Phoebe watched it drift off... After this we headed back.  It seemed only 15 minutes after getting back to the condo that my friend, Avi showed up at our door.  She lives upstairs with her family and she wanted to know how we were. As I stepped out in the hall to talk with her I heard the alarms blaring through the building.
"What's going on?!"
"People are trapped in the elevator!  The fire department is coming!!  If they can get here!"
"Oh no!"
Then she explained that the garage was filling quickly downstairs. Her car is down there, and so was ours.  It didn't seem safe to go down so she led me and the girls to a tiny window where we could crouch down and see.  Sure enough the cars were in several feet of water.
After this we felt glum and stressed out so we headed to a restaurant in walking distance and had lunch. Around 3pm the management came by with "Rules and an update"....
No going in the elevators.
No going in the garage.
San Diego Gas and Electric is coming in the next 2 hours to determine if power must be shut off.
Evacuation is not mandatory at this time, but the worst part of the storm is yet to hit us in the next few hours.
They left off the "Have a nice day" part.  Probably a good idea.  Somewhat panicked now, I called friends and family to see if anyone could drive us or put us up.  I told the girls to pack and put anything they feel is valuable off the floor.  Then we began to research hotels that take pets while we watched on the news people being rescued in inflatable rafts from a hotel up the street.  For hours we saw residents leaving on foot through the gate.  We decided to wait till it was "mandatory", and I kept the girls busy wrapping Christmas gifts.
By 6pm or so it had stopped raining and the water began to go down in the garage.  By 9pm it was low enough that we could check our car.... It started!!!  It drizzled a bit around midnight, but by morning it was over.
This morning we went out to check the damage.... 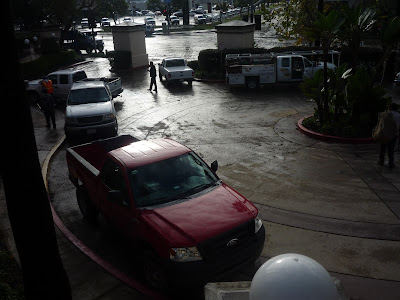 A lot of vehicles were in the driveway, as there's a lot of clean up to do. 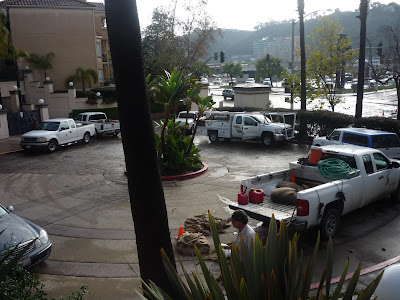 Many vehicles were towed out of the garage this morning, we heard that several were totaled. 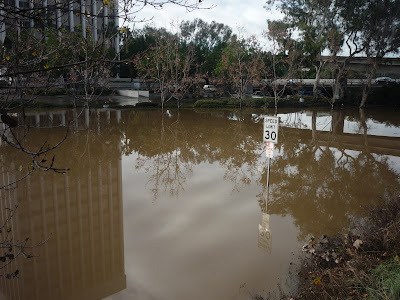 There's still a lot of water over by this sign, but it's much lower. 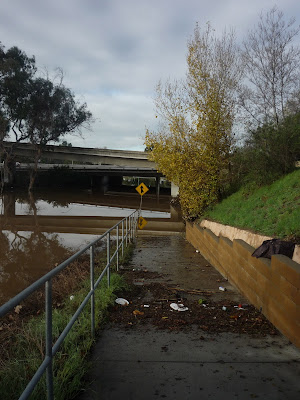 This way is still a mess. 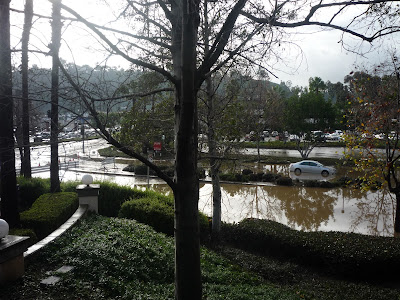 This car was completely submerged yesterday, but no one has come yet to tow it off. 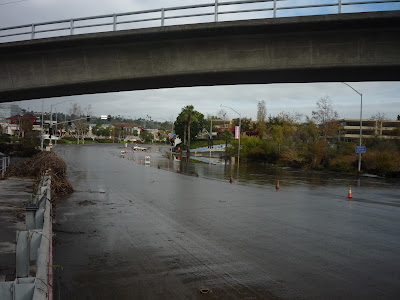 Back up on Mission Center Road, the waterfall is gone, as is the porsche. 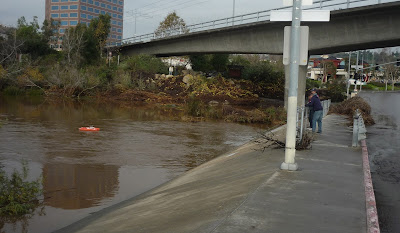 These men had a little orange float on a string and a computer. Not sure what that was about, but it looked important and official so we took a picture! 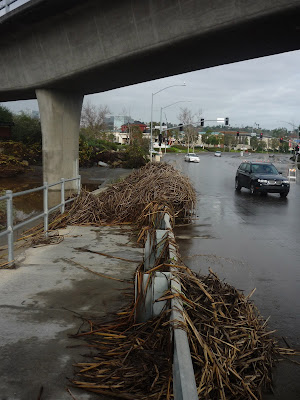 This is all the debris, or "river vomit" as I like to call it, on the sidewalk. 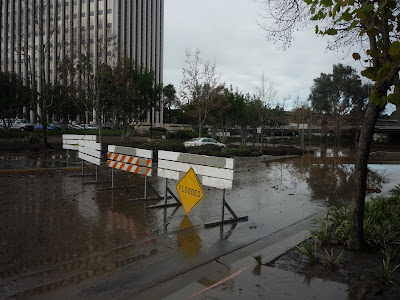 There's still water and A LOT of mess, but things could have gone much worse for us. In the end we're thankful.  Have a wonderful holiday and a Merry Christmas to you all.
Email Post
Labels: christmas evacuation flood Mission Center Road San Diego flood State of Emergency

Carolyn Watson-Dubisch said…
No, our car is running and fine. We have a Toyota Highlander... It's an SUV and pretty high off the ground. I don't think the water level ever reached the exhaust pipe.
December 23, 2010 at 1:59 PM