It's finally really heating up here in San Diego. I can't complain, (much) it's better than last year. To distract the kids and help Mike make a dent in the mountain of work he has, I took the kids for some outings this week. We headed over to the Museum of Man on Tuesday. I thought it might be nice and air conditioned.... No such luck.

Even packed to the gills and boiling hot, it turned out to be a great place!

The Mayan exhibit is always fascinating...

Upstairs we studied evolution. This display ventures into the future!

This is a Dire wolf, the sign said there are 3,600 Dire Wolves in the LaBrea Tar Pits. I think that means there were an almost alarming number of huge prehistoric wolves around here or the tar pits sucked up a massive wolf magnet at some point.

By the way, before you decide how awful this photo is please consider the following....

"I think Bigfoot is blurry, it's not the photographer's fault" Mitch Hedberg

So there you go... Best picture of Bigfoot EVER!

At least the gift shop had a/c... Yes we lingered there!

On Saturday, the nearby historic park called "Old Town" had a "Twain Festival".
Apparently it's been 100 years since Mark Twain died so we headed on down to ummm... celebrate his death.

This was called "fishing for words"...

She had to spell words like "Pshaw" and "Pudd'n head". It was... interesting. 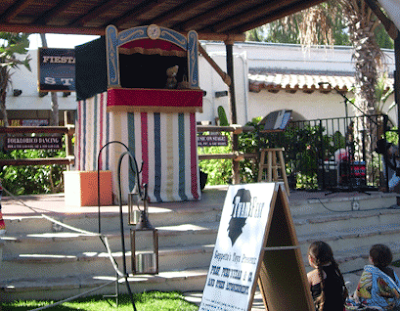 Over all it was a nice festival, though most of the prizes were old books. I liked them, but my kids didn't. Oh well.
Email Post
Labels: Big Foot Mark Twain Mayan Museum of Man puppets Spelling bee